When to repair your computer and when to replace it 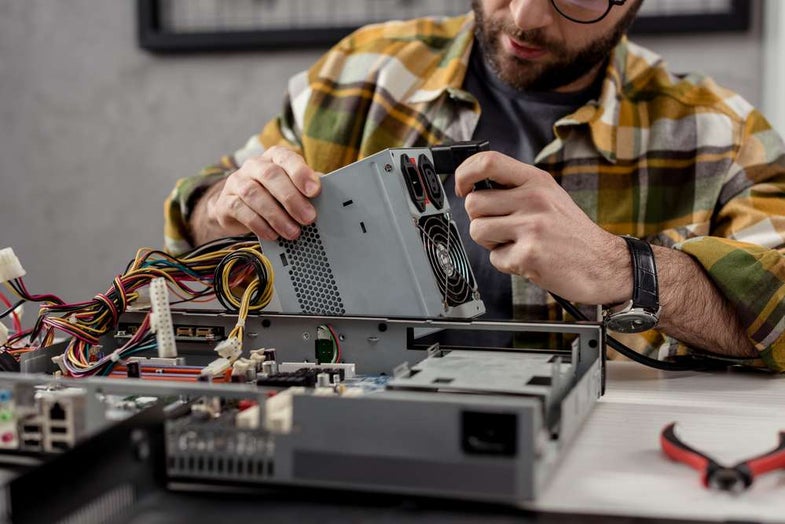 No computer lasts forever, but to get the most out of your investment, you probably want to stretch its life out for as long as you can. Upgrades and repairs can carry your machine along for a decent amount of time, but at a certain point, you might be better off investing in a new computer instead of dribbling away your money on continuing maintenance.

Eventually, every computer slows down—even if you’re using it for the exact same things you were five years ago.

“Over time, you’ll get Windows updates, or a new version of macOS, and these things can weigh heavily on the PC,” says Joe Silverman, owner of New York Computer Help. Even some of your apps will update themselves over time, and the web pages you visit may just require more resources than they used to. (Remember what the web looked like in the 90s?). When the machine slows to a crawl, you’ll have to bite the bullet and spend your money on something better.

Before you shell out for a new set of RAM though, you should figure out what’s actually causing the slowdown. This will tell you whether you really need a replacement, or you’ll find it worthwhile to eke out more time with an incremental repair or upgrade.

Your computer consists of multiple components, each with their own specific purpose. Any one (or more) of them could be causing your slowdowns or other issues. To make sure you spend your money in the right place, you need to diagnose the source of the problem.

First, make sure it isn’t a software issue. “It’s always good to run a virus or malware test, and make sure there are no infections in the background,” says Silverman. You can also check programs’ resource usage: On a PC, open the Windows Task Manager (hit Ctrl+Shift+Esc) and click More Details; on a Mac, open Spotlight (press Command+Space) and search for Activity Monitor instead. If you see one program gobbling up all the CPU or RAM, uninstalling it and replacing it with an alternative may speed things up.

If you can’t narrow the issue down to just one program—or the problem lies with an essential one, like your web browser—then you may need to upgrade your hardware. During the next slowdown, open up that same Task Manager, head to the Performance tab, and look at your CPU and memory usage. If either of those graphs shows particularly high, sustained usage, you know which part probably requires an upgrade.

It’s also possible that one of your components is failing entirely. “Do a hard drive test with a program like HD Tune, which has a free trial,” says Silverman. “It will let you know how slow or abnormal some of the read-write activities are, and if your hard drive is failing.” I also like CrystalDiskInfo, which isn’t as thorough as HD Tune, but will give you a basic, clear idea of your hard drive’s health for free.

While you’re running through potential trouble areas, check your RAM as well. “Failing RAM could cause slowness, but it can also stop your computer from turning on, or it may shut down randomly,” says Silverman. “So run a RAM test like Memtest, which will check each stick and see if it’s good or not. If you have a bad stick, you want to make sure you replace it.”

Once you narrow down the problem to a specific component or two, you’ll be able to better target your repairs.

Unfortunately, upgrading parts costs money—and some replacements are more worthwhile than others.

“RAM can definitely improve performance, and upgrading from a mechanical hard drive to a solid state drive, or SSD, is probably the best way to speed up your computer,” says Silverman. As a bonus, you can probably perform both of those upgrades yourself. “But I wouldn’t upgrade the motherboard or CPU,” he says, “since it’s going to be a nominal speed bump.” When you replace the CPU with a newer model, you often have to swap out other components to ensure compatibility—and at that point, you might as well just buy a new machine.

To determine whether an upgrade is worth your money, look at how much it will cost, and compare that to the computer’s age. “If the computer is seven years old or more, and it requires a repair that is more than 25 percent of the cost of a new computer, I’d say don’t fix it,” says Silverman. “If your computer is three to four years old, that’s a better time to start looking at an upgrade, since you can buy one to three more years of time.” At that age, you can probably get away with a repair that costs 50 percent of a new machine. Pricier than that, and again, you should think about a new computer.

It would be great if we could tell you exactly what to do when your repair or replacement will have a specific cost. But it’s difficult to give hard numbers that apply to everyone. That’s why it helps to perform those diagnostics.

In general, if you know a single component bears the blame for slowing down your computer, upgrading that part can probably extend your machine’s lifespan by a few years. If a lot of components are struggling to keep up, you’re running on borrowed time. In that case, you’re probably better off buying a new PC.