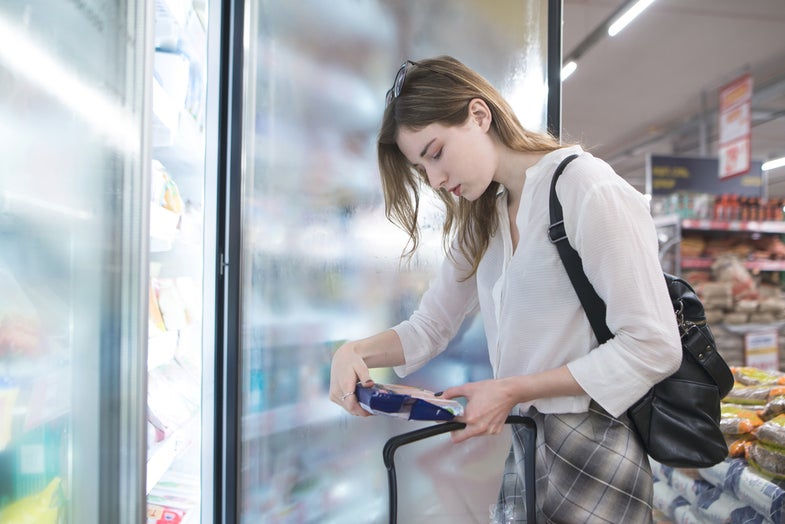 As you prepare to cook a feast, you open the fridge…and realize that a key ingredient is still frozen solid. Most cooks would say you’re doomed. But don’t lose hope: You can get the ice out of your food quickly and easily—and sometimes, it results in an even better dish. Here’s what you need to know to safely thaw that frozen food at top speed.

How freezing and warming changes food

We all know water becomes ice when it gets cold enough. When it comes to food, that’s a bigger deal than you might think. As H2O freezes, it can expand up to nine percent. When this happens to liquid within your chicken cutlets or green beans, the resulting ice crystals rupture the cells, sort of tenderizing it from the inside. This means, when you’re ready to cook the ingredient, you have to be careful with that other key aspect of food, its texture

Like freezing, defrosting changes a food item. For starters, the ice throughout those cells does not melt evenly: Food left out to thaw at room temperature will start defrosting at the surface, and then the warmth will work its way inward. Depending on thickness and density, it might sit out for hours and remain frozen solid in the center. Worse, bacteria clings to the surface of food, and freezing doesn’t usually kill it. So while you’re waiting for the turkey to fully thaw in the center, bacteria on the surface can spoil your bird, creating off-flavors and putting you at risk of food poisoning. To thaw quickly and safely—and still wind up with quality food—the answer is not to let your ingredients sit at room temperature.

Safe thawing by the numbers

For safe thawing, you need to remember two numbers: 40°F (4.4°C for you metric sticklers) and 140°F (60°C). The defrosting item (usually) should not sit anywhere between these two temperatures for more than a few minutes. Outside of that range is the safe zone: At or below 40°F, the cold will keep bacteria dormant, and at or above 140°F, the heat will kill those germs. So keep a kitchen thermometer (or two) handy during the thawing process to track temperatures.

Just one caveat: If you plan to pop your food right onto the stove or into the oven, and you’re trying to thaw the raw ingredient as quickly as possible, you can let that item fall into the danger zone. The concern here is bacteria on the surface of the food, and you’ll be putting it well over 140°F with most cooking methods, so germs won’t have time to ruin it. . Otherwise, stick to these numbers.

While monitoring temperature is a good general guideline, the question remains: How can you speed up the defrosting process without endangering the health of whoever’s coming to dinner? That depends on the type of food you want to de-ice.

Roasts, turkeys, and other large hunks of meat

You know better than to leave your Thanksgiving turkey sitting out on the counter, but defrosting in the fridge is notoriously slow: The USDA recommends you leave a measly one-pound roast in there for up to three days. Instead, try cold-water thawing, which will take—at maximum—one day for a 20-pound beast.

Why water? Heat moves from warmer objects to colder ones, and this remains true even when there’s only a few degrees of difference between the two. If you put a frozen object in contact with something just warmer than freezing point, the two temperatures will approach each other. Whether the two items end up freezing or thawing is a question of volume—for example, if you put a few ice cubes in a glass of warm soda, there’s more soda than ice, so the drink remains liquid while the cubes melt.

However, not all environments are created equal. Water has a much higher specific heat than air—that is, it takes more energy to raise its temperature. In fact, heating one kilogram of water by one degree Celsius takes 4,184 joules of energy, more than performing the same feat for any other common substance, including air. That makes this liquid ideal for keeping and transferring heat.

Going back to that frozen object, when you submerge it in enough cold water, the item will gradually thaw without significantly changing the temperature of the liquid.

To bring this out of the region of the theoretical, place your meat in an airtight container, such as a vacuum-sealed bag, and completely submerge in a bath of 40°F water. Then leave the hunk in there for thirty minutes for every pound of meat, adding ice to keep the liquid at 40°F or so and changing out the water roughly every thirty minutes.

Once that time runs out, you’ll need to cook the meat right away. So do your math ahead of time, and have the oven ready to go.

Despite all those safety warnings, it turns out you can safely defrost thin cuts of meat in a hot-water bath. In 2011, the FDA did an experiment with one-inch-thick beef strip loin steaks and found that rapidly defrosting the meat in an immersion circulator at 102°F for 11 minutes, then immediately getting it on the pan or the grill, created a meal with juiciness and texture close enough to fresh beef for the majority of taste testers.

If you need to get burgers, chicken strips, or similar cuts of meat from cold to hot at top speed, just seal the meat in an airtight Ziplock or vacuum seal bag and submerge it at about 100°F for 10 to 15 minutes. If you need the stove for other prep, you can defrost them under cold running water.

For sliced bread, pastries, and other frozen baked goods, leaving them out on the counter to thaw will make them go stale faster. As the cooked dough warms, the starch inside it crystallizes, sucking up the melting water and drying out the texture. Instead, apply some heat to defrost your snack.

With slices of bread or small portions of pastries, you should zap them in the microwave for 15 to 25 seconds per item. For whole loaves and larger baked goods, fire up the oven to 325°F and leave the item in for 20 to 30 minutes.

For almost all frozen veggies, you don’t need to defrost them at all, because you’re going to toss them in your bubbling recipe. So, during the cooking process, just throw them in frozen. This holds true particularly if the greens serve as a smaller element in a broader recipe, or if you’re going to eventually roast, steam, or otherwise heating them until they reach 140°F. Skipping thawing will save you the most time and give you the highest-quality results.

Also, remember that many frozen vegetables are blanched—that is, steeped in boiling water for a few seconds—before freezing, which means they’ll cook faster than fresh ones. That said, there’s no set standard, so check the manufacturer’s website, or keep an eye on your dish as the veggies cook and make sure to add the frozen ones last.

The method you use for defrosting fruit will depend on how you plan to eat it. For example, do you want a healthy snack? Bad news: Many manufacturers pack frozen fruit in sugar to maintain its quality for longer, so if you plan to eat it whole, we’d recommend a fresh alternative instead. That said, frozen fruits make ideal components of sweet sauces, jams, and even baked goods. If you don’t care about having whole fruit versus pieces, and you’re going to use it right away, then defrost it in the microwave: Put the package in for thirty seconds on defrost, check it, and repeat. Keep this up until it’s soft, and finally drain the package of any water. Don’t forget to check the packaging to see if it includes added sugar before you mix in your own sweetener.

To keep your fruit whole, first assess what you’re defrosting. Something fragile like raspberries simply cannot revert to its former self when it thaws: The ice crystals will render it mush. Even sturdier fruits shouldn’t sit out to thaw: You’ll need to cook straight from the package. To compensate for the frozen state of the fruit, add at least five minutes to your bake time. Before tossing in the frozen pieces, lightly coat them in flour and add more thickener to compensate for the water released in thawing. Or look up a recipe that specifically calls for frozen fruit and use its proportions instead.