The history and mystery of America’s long-lost pickle sandwich

In which one writer seeks to understand the Depression-era (maybe?) staple. 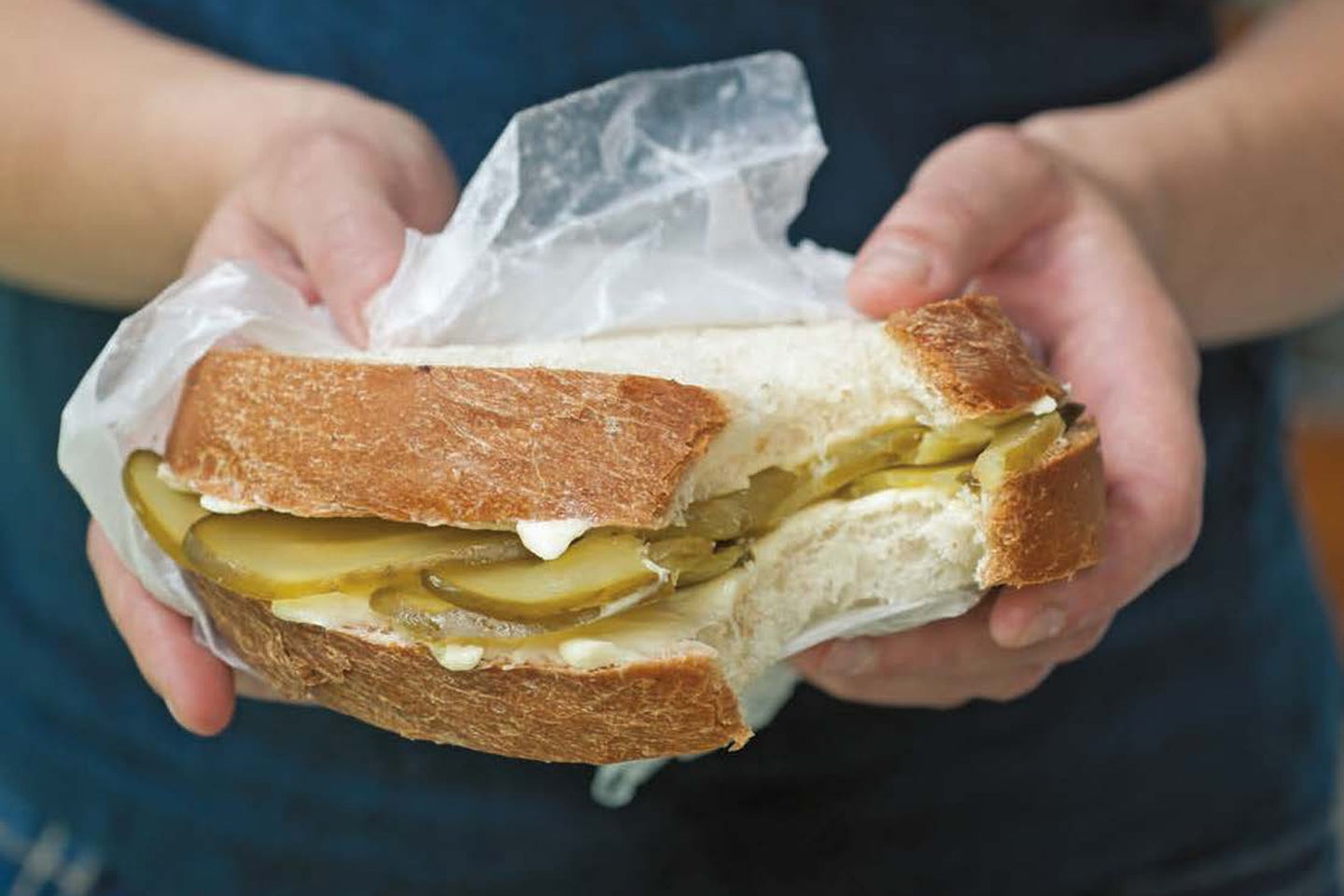 In this Depression-era stalwart, soft, chewy white bread (homemade or store-bought) is an ideal canvas for butter and pickles. Jennifer May
SHARE

I had never questioned their name either, but rather quietly, to myself, word-associated bread-and-butter with “reliable”—just like the idiom. What reliable pickles! Always perfect for snacking, on a burger, or chopped up in an egg salad. But no, that’s not quite right either.

After decades in the dark, a lightbulb went off when I read this passage in Amy Thielen’s The New Midwestern Table (Clarkson Potter, 2013), this month’s pick for the Saveur Cookbook Club:

I realized the answer may be in the name itself: bread-and-butter pickles. Sliced pickled cucumbers layered between two slices of buttered bread was, allegedly, a Depression-era staple, due to the low cost and high availability of those ingredients. I say allegedly because there aren’t many contemporary sources that can confirm this, and those that do mention the sandwich (the blog Cottage at the Crossroads, Chef John Mitzewich of Food Wishes, and Marisa McClellan in an old Serious Eats post) report it through hearsay: “Supposedly…”; “I’ve been told…”

Why is it so difficult to find a hard, veritable source for this theory that bread-and-butter pickles were named after a sandwich? Seems simple enough, if not glaringly obvious.

There are plenty of accounts of the PB&P. The Times wrote about it in 2012, and even provided a recipe. Later, a peanut butter and mayonnaise sandwich also circulated the Internet. When I asked Jed Portman, editor of Midwesterner, he said, “I wish I had something of value to share. I’ve heard of peanut butter and pickle sandwiches, but I’ve never had one—much less the butter variant, which is intriguing.”

When a quick Google search for “bread-and-butter pickle sandwich” led me to a recipe on Smitten Kitchen, my ears perked up. But alas, the matching keywords were in a comment by a user, not by Deb Perelman herself. “I LOVE B&Bs!” the reader writes. “I make sandwiches of them on buttered white bread.”

Perhaps this is the point: The story of the bread-and-butter pickle sandwich lives not on the page, but, as many of the best foods do, in orature (oral literature). Word of mouth. Comments sections. Message boards. Facebook groups. The only way to find its elusive history, then, is to ask around.

And then … one of my readers, Jessica Wharton, showed up in my inbox like a unicorn: Yes, bread, butter, and pickles.

Though Wharton was raised on these sandwiches, even she doesn’t know where they come from. “It’s a recipe from my great-grandmother and her family,” she tells me in an email. “I grew up in a rural farm town in Connecticut, but Connecticut honestly doesn’t seem correct to me as an origin, especially since besides my family I don’t know anyone who eats these either. It’s a thing we’ve always had every July or August when the cucumbers in the garden are ready and there are tons, and you’re not really sure what to do with all of them.”

I imagine my search for the story behind bread-and-butter pickle sandwiches will continue after the publication of this piece, and in its comments section.

For now, eager to try one myself, I made a batch of Thielen’s refrigerator bread-and-butter pickles with curry powder. I cut up some mini cucumbers (often called pickling cucumbers) and salted them to draw out moisture and to preserve their crunch. To make the pickling brine, I combined white vinegar, sugar, ginger, garlic, chile, mustard seeds, and curry powder, and brought them to a boil in a saucepan. The spicy steam filled the kitchen, like aromatherapy. After rinsing the cucumbers and draining them thoroughly, I sliced up a red onion and added it to the bowl, followed by the hot, golden brine. I let my pickles cool slightly, then packed them in old kimchi jars that were lying around and put them in the fridge.

I could only wait a few hours before making myself The Sandwich. I popped a couple slices of brioche into the toaster for a few seconds, only to soften them up. Next, I spread unsalted, room-temperature butter on one side, then laid a single layer of pickles—“overlapping slices” as Thielen suggests—on the other slice, and joined them together. I took a bite…and promptly texted three of my closest friends.

It’s such a rare pleasure, as an adult, to experience a new taste, especially one that changes your mind about food. Who knew that pickles, for instance, could taste so much fresher, crunchier, more nuanced—leagues above the neon-green store-bought ones? Even more so when you’ve added a hint of curry powder for savory warmth? Who knew that soft buttered bread, which is already sweet and comforting on its own, could partner so seamlessly with its exact opposite: sharp, crunchy pickles? Who knew that this was the food pairing I’ve been waiting for all along?

The two together—butter and pickles—remind me of a cucumber and mayo sandwich, sure, like the kind you’d eat at English tea. In fact, Wharton wrote me back days later, after confirming with her dad, that their family tradition did indeed come from a very old recipe for English tea sandwiches. It is an entirely different experience, though, when you pickle the cucumbers yourself and swap out the mayo for butter. Its taste is surprisingly multi-dimensional, yet balanced. Whether you’re having it for afternoon tea or for a grab-and-go farmhouse lunch, the bread-and-butter pickle sandwich is, truly, the food of royals.

Update: One of the first recorded uses of the phrase “bread-and-butter pickles” can be traced back to 1923, when Omar and Cora Fanning of Illinois registered for a trademark (since expired) on the logo for their family pickles. According to a 1996 issue of the Feingold News, “Mrs. Fanning worked out an agreement with a local grocer, who gave her groceries—including bread ‘n butter—in exchange for the pickles.” Other related trademarks with the United States Patent and Trademark Office include “Betty Rae’s Bread & Butter Pickles” and “The Original Bread ‘n Butter Pickles,” but no one owns just “bread and butter pickles.” Thank you to reader Nicolas Emerson for the tip.