Wild Contraception: Beyond a Happy Ending

Pests like deer, rats, and coyotes make up one side of the wildlife contraception story, but what happens when you... 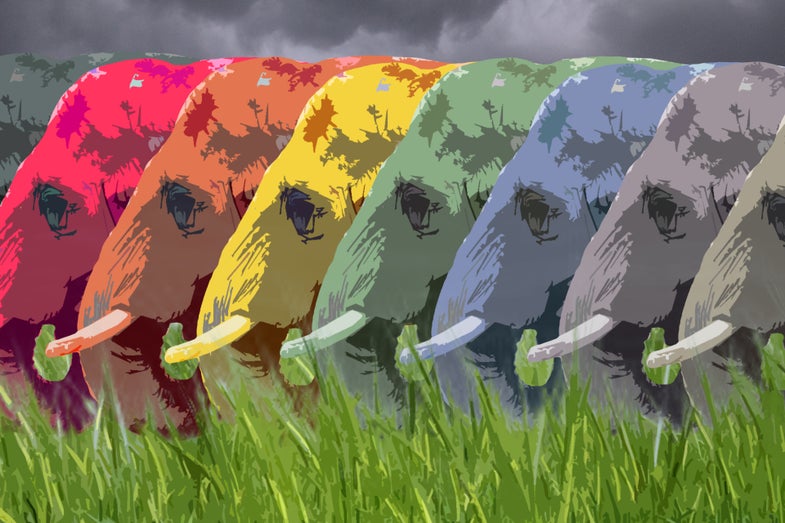 Pests like deer, rats, and coyotes make up one side of the wildlife contraception story, but what happens when you need to control a population of animals that humans have sought to save? Once hunted to the brink of extinction, species like elephants and seals have made excellent recoveries—but as their populations have grown, they have again found themselves in conflict with humans for resources like land or food. So how do you tamp down on species we brought back and have tried to conserve?

Nowhere is this more pertinent than in South Africa, where herds of African elephants live on game reserves. Once nearly eliminated by hunters for their ivory tusks, African elephants (still listed as Vulnerable by the IUCN) have made a remarkable comeback, and their country-wide population of 20,000 is getting to be unsustainable. Simply put, there isn’t enough room or food in South African game reserves to support numbers of elephants they have. This can lead to conflict with neighboring farmers, who might take issue when elephants devour most of their crops and trample the rest.

In response, thirteen South African game reserves have begun using contraception to control the elephant population. Game rangers give elephants the porcine zona pellucida (PZP) vaccine (which we covered in the last installment of this series), an immunocontraceptive also used to control deer populations in the United States. PZP blocks fertilization of mammalian eggs by creating antibodies that interact with the surface of the egg, preventing sperm from accessing it. The process costs about $142 per female elephant in the first year and rangers administer PZP to female elephants by darting them from a helicopter, a process that takes a few hours for each animal.

PZP darting seems to be effective for smaller reserves whose populations have not yet gotten out of hand. However, scaling this process is an issue for the largest game reserves, which lack the resources to administer doses to large elephant populations spread over vast distances. The San Diego Zoo has begun experimenting with giving vasectomies to bull elephants at South African game reserves, a method of birth control that is more effective but also more involved. Unlike hormonal methods, vasectomies are a one time deal, but surgery on an elephant is no small task, involving experienced personnel, a controlled space, and a decent amount of time. To top it all off, some of the larger, more dominant elephant bulls are simply too large to be safely operated on, meaning that vasectomies are only really options for sexually active but not fully mature males. Because of all this, the San Diego Zoo is only looking at using vasectomies on smaller populations.

Elephants aren’t the only example of this kind of a species suddenly needing control either. In Canada, a skyrocketing grey seal population is competing with people for a shared resource: fish. The population there has grown from roughly 10,000 in 1960 to over 330,000 today. Hunting bounties on grey seals in the United States ended in the 1960’s and the grey seal fell under the 1972 Marine Mammal Protection Act, bolstering the animal’s numbers in the North Atlantic, even while hunting grey seals continued to be permitted in Canada. But as the seal population has risen, fisheries’ stocks have decreased, much to the dismay of the fishermen working the seas. Blame for the decrease in available cod has fallen squarely (and controversially) on the seals’ flippers, leading to plans to cull nearly 70,000 grey seals over 4 years.

Fortunately for the seals, the people who hunt seals and the fishermen who don’t like them aren’t always the same people. Demand for seal products has been low in recent years (partially due to bans on seal products in the EU), leading to cancellations of the grey seal hunt in recent years.

On Sable Island, one of Canada’s newest National Parks, Canadian lawmakers are considering using PZP contraception on grey seals. In their October 2012 report, the Standing Senate Committee on Fisheries and Oceans noted that contraception to control seal populations “is believed to be more acceptable when considering ethics, social good, public perception, and international market implications” but also acknowledged concerns about the cost, logistics and effectiveness of contraceptive methods. This is despite the fact that previous studies into the effectiveness of the PZP contraceptive on grey seals reported that pup production was reduced by almost 90%.

Whether Canada chooses to go the route of South Africa in dealing with their charismatic megafauna remains to be seen. Either way, the elephant in the room remains: what method will keep numbers at an appropriate level without harming the species we’ve already nearly eliminated?

_This is part two in our three part series investigating wildlife contraception. You can read part one here. _