People Trust Robots To Lead Them Out Of Danger, Even When They Shouldn’t

Blueprint for the future? 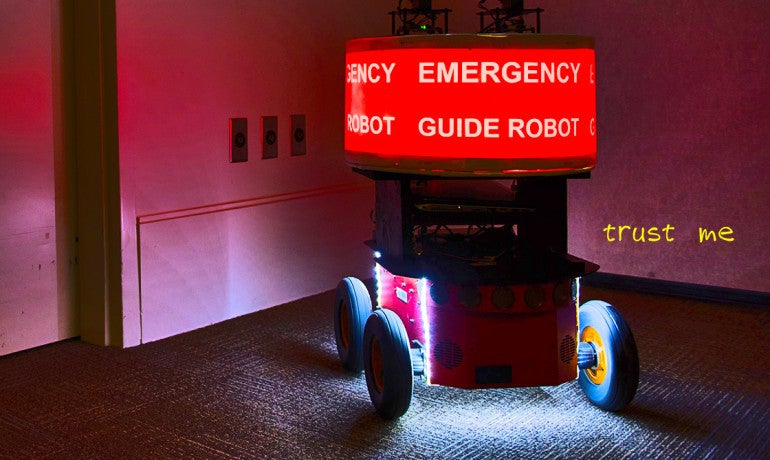 Should you trust a robot in an emergency? That depends on the robot.

The team asked over 40 volunteers to individually follow a robot labeled “Emergency Guide Robot”. The researchers had the robot (which was controlled remotely by the scientists) lead them to a conference room, but in a few of the cases, the robot first led the test subjects into the wrong room first, where it travelled in circles. In others, the robot stopped and participants were told it had broken. After getting the volunteers into the conference room, the researchers filled the hallway with smoke, and set off a smoke alarm, placing the untrustworthy robot outside the door.

“We expected that if the robot had proven itself untrustworthy in guiding them to the conference room, that people wouldn’t follow it during the simulated emergency,” said Paul Robinette, an engineer who conducted the study. “Instead, all of the volunteers followed the robot’s instructions, no matter how well it had performed previously. We absolutely didn’t expect this.”

Instead of leading them to the closest, clearly marked exit that the volunteers entered the building from, the robot led volunteers back to a different exit in the back of the building, and occasionally, even to a darkened room blocked by furniture. The humans showed a stunning level of trust in a machine that clearly hadn’t earned it.

“We wanted to ask whether people would be willing to trust these rescue robots,” Alan Wagner, a researcher with the study said. “A more important question now might be to ask how to prevent them from trusting these robots too much.”

While these robot guides were controlled by humans, and were purposefully doing a bad job, someday in the future, robots might function as helpers in emergency situations, aiding in evacuations and similar predicaments. While this could be a wonderful help, the fact is, sometimes robots break, and as this study indicates, it’s still a good idea for people to think for themselves. After all, the machine might not always know best.