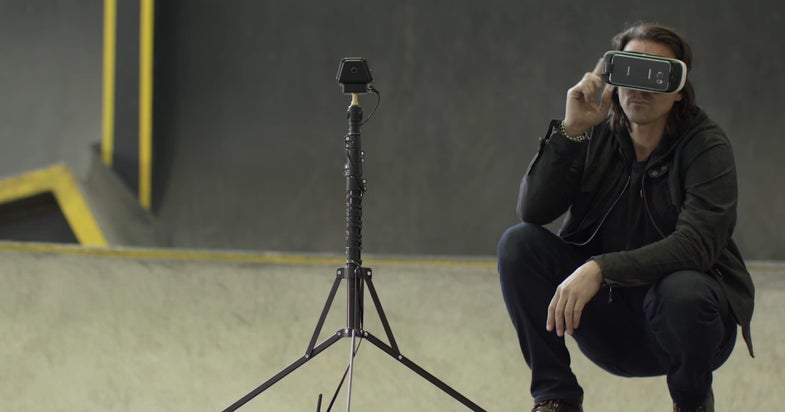 As 2016 brings the first generation of consumer virtual reality headsets, everyone is looking for the content that makes the investment in a headset and the supporting hardware worthwhile. Immersive video games are an obvious attraction, but another is live VR video. This means concerts, sporting events, festivals, and anywhere a viewer would want to be, but can’t.

VideoStitch wants to be the first company to master simple, live virtual reality streaming. The company, which has previously sold VR streaming software, announced today the Orah 4i, a 4K virtual reality camera that only needs one cable to set up.

It’s not just a 360-degree camera for viewing on mobile-phone headsets. It can be used as such, but the Orah camera supports full high-definition video streaming even for devices like the Oculus Rift and HTC Vive.

The Orah 4i uses 4 custom-built cameras in an aluminum casing, with four microphones to capture sound from every direction. The only setup needed is to plug the Orah 4i into the included “stitching box,” which is a Linux-based computer specifically built to stitch the four cameras’ feeds into a single 4K VR stream. The Orah camera outputs a standard video stream, in the same format as those accepted by Facebook and YouTube.

The VR stream is controlled by a smartphone app, and if the broadcast wants to use multiple Orah cameras, the app can be used to switch between them in real time.

The stitching box is small enough to be either placed under the tripod or hidden away near a power source. VideoStitch says it plans to adding a battery to make it completely portable, as every component of the system can easily fit in a backpack.

Most VR live-streaming services right now either offer only the software, or rely on selling bulky rigs of GoPros or even Red Dragon cameras. However, these require intensive stitching on desktop computers.

VideoStitch sees the most potential in streaming 360-degree video to services like Facebook, and they plan to merge their Live Video and 360 video services soon.

This is a tool for people who want an easy way to stream VR, without hiring a VR production company. It’s not a product for huge commercial interests like the NFL, but individuals or small businesses who want to livestream their lives and work. The entire system is selling for a pre-order price of $1,795, which they say will double to $3,595 after the pre-order period. VideoStitch says they will begin to ship in July 2016.