Samsung Introduces Virtual Reality Smartphone You Wear On Your Head Virtual reality—almost as good as actual reality, but without those pesky smells. Okay, that may not be quite Samsung’s message, but the company is making a hard push for VR with two announcements out of its 2014 developer conference.

The first is that its Gear VR headset, announced earlier this year, will ship in early December. Developed in partnership with virtual-reality-headset darling (and pending Facebook acquisition) Oculus, the Gear VR connects to Samsung’s Galaxy Note 4, which the company says creates “an entirely new mobile category.”

Marketing hyperbole off the starboard bow! First of all, the Gear VR—which will be sold for an unspecified price—uses the Galaxy Note 4’s 5.7-inch high-res screen for its VR capabilities, requiring you to actually snap the smartphone into the headset. That’s all well and good, but as soon as you upgrade your phone the Gear VR seems like it’ll just be another piece of expensive plastic that no longer fits the latest and greatest.

Samsung’s also attempting to woo consumers to the virtual side by partnering with a number of major names in software and entertainment to provide VR content. The list includes Cirque du Soleil, DreamWorks, Harmonix, Vevo, and Marvel, which will let Gear VR users explore Tony Stark’s lab ahead of next year’s sure-to-be-blockbuster Avengers: Age of Ultron. But most of the partners’ ventures sound more like marketing gimmicks or proofs of concept than actual, useful applications.

That said, Samsung is also making available an Oculus Mobile software development kit, letting developers create their own apps that take advantage of the interface. But the limited availability of hardware and small market niche means that there probably won’t be rampant development in that space quite yet.

To demonstrate its commitment to VR, Samsung also gave a sneak peek at a second device, called Project Beyond. It’s a disc about the size of a medium-sized plate that contains “16+1” HD cameras that can capture a 360-degree view of a location and either store it or stream it live to someone wearing a Gear VR. It doesn’t, however, record audio, which may lessen the feeling of actually “being there” and Gizmodo’s Sean Hollister, who got to try it out at Samsung’s conference, called it “abnormally grainy and … a little bit awkward.” 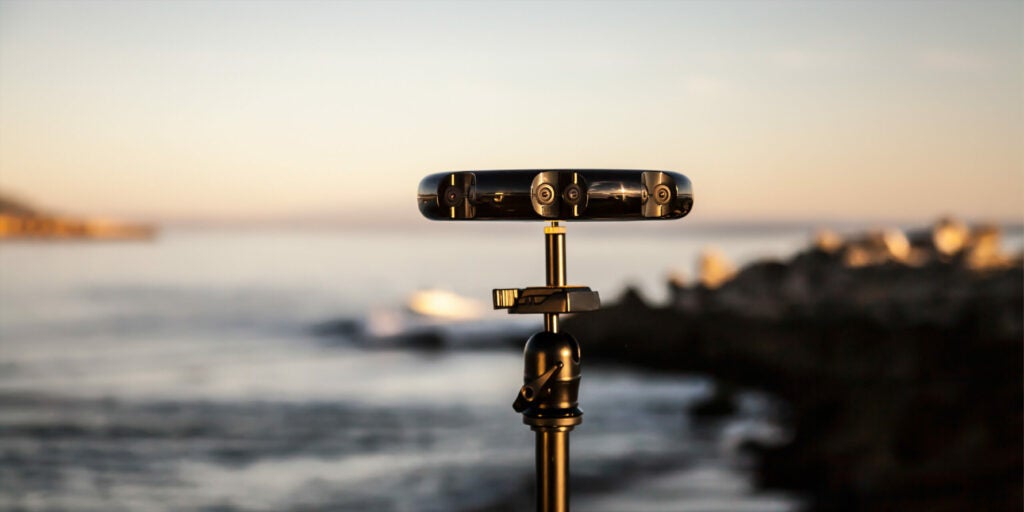 Project Beyond is even less far along than Gear VR: Samsung says it’s “not a product, but one of our many exciting projects currently under development.” But if you snag a Gear VR, you’ll be able to use it to view footage Samsung has captured with the 360-degree camera.

Despite these announcements, virtual reality seems like it’s still rooted strongly in the stuff of science-fiction rather than the practicality of the here and now. A headset linked to a specific smartphone and a prototype camera don’t seem likely to catapult the technology into the mainstream, no matter how much Samsung might like them to.