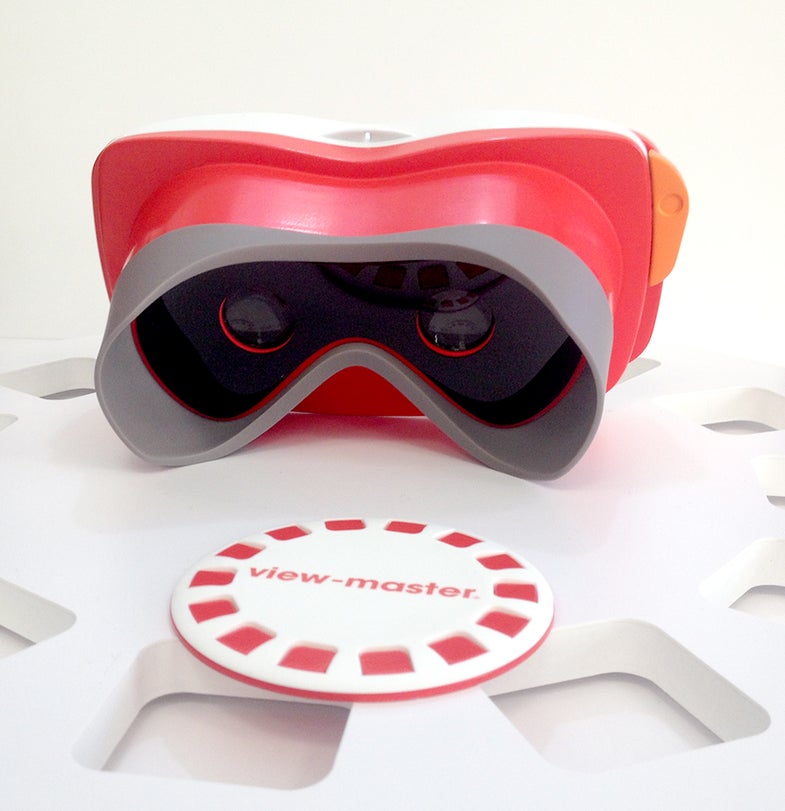 This morning, Mattel announced a partnership with Google to upgrade the classic toy View-Master, which was first introduced at the 1939 World’s Fair in New York. The new and improved View-Master viewer will run on the Google Cardboard platform, with special virtual reality and augmented reality content created for kids and families. The team says it will work with any phone and on any operating system. The device was made to accommodate the larger devices currently on the market (like iPhone 6+ and Nexus 7), and adjustments will center and fit smaller smartphones.

Notably different from Cardboard, though, is the materials. One might imagine a plastic casing could keep your smartphone safer from grubby little hands than cardboard would.

The VR View-Master itself was not a working prototype, but we got to try out the experience using Google Cardboard. The magnetic switch on the side of the headset did harken back to View-Masters of yore, but what you see was quite different. The reel (which in the old version would slip insider the viewer) sat on the table. Wearing the viewer, we looked at the reel and it launched us into San Francisco. We saw Fisherman’s Wharf, which looked much warmer than New York is today. We didn’t really want to leave, but next up was a CGI dinosaur world, where we waved “hi” to a stegosaurus and learned a little about it with a handy text popup. And finally, we looked around the moon’s surface and saw an archival image of the actual moon landing.

Other experiences will be downloadable through the app, but exclusive content will live on the augmented reality reels. Like Cardboard, the View-Master is made for short bursts of VR and AR experiences: There’s no head strap, so hopefully it will be easier to tear it from your child’s hands when they need to go outside and experience the real world for a while.

The new View-Master will cost $30 for the viewer and one reel, and additional reels will be sold in packs of four for $15. They’re aiming to release it in October.