Quotations from Einstein reveal that he was not only brilliant but fearless and self-effacing. 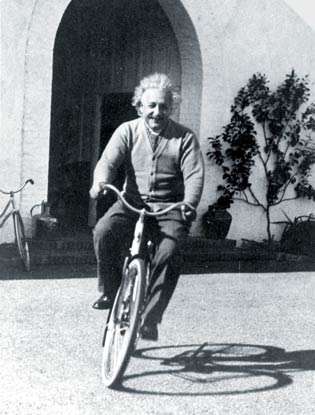 by American Museum of Natural History

The newly published Einstein Scrapbook by Ze’ev Rosenkranz (Johns Hopkins Press) and the recently opened Einstein exhibit at the American Museum of Natural History in New York offer fresh perspectives on the 20th century’s most esteemed scientist. The quotations from Einstein sprinkled through the book and exhibit reveal that he was not only brilliant but fearless and self-effacing. The exhibit will run until August in New York and will move to Los Angeles in September 2004.

“I have no special talent. I am only passionately curious.â€

“It is in fact nothing short of a miracle that modern methods of instruction have not strangled the holy curiosity of inquiry.”

“I regret that I cannot accede to your request, because I should very much like to remain in the darkness of not having been analyzed.” (In response to the suggestion that he undergo psychoanalysis, 1927).

“The most beautiful thing we can experience is the mysterious. It is the source of all true art and science.”

“I am deeply moved by the offer from our State of Israel (to serve as President), and at once saddened and ashamed that I cannot accept it. All my life I have dealt with objective matters, hence I lack both the natural aptitude and the experience to deal properly with people and to exercise official functions.”

“Concern for man himself and his fate must form the chief interest for all technical endeavors. Never forget this in the midst of your diagrams and equations.”

“When the blind beetle crawls over the surface of a globe, he doesn’t realize that the track he has covered is curved. I was lucky enough to have spotted it.”

“If I would be a young man again, I would not try to become a scientist or a scholar or a teacher. I would choose to be a plumber or a peddler in the hope to find that modest degree of independence still available under present circumstances.”

“Do not worry about your difficulties in mathematics. I can assure you that mine are still greater.” (Letter to a 12-year-old).

“If all the young people in America were to act as you intend to act, the country would be defenseless and easily delivered into slavery.” (Letter to a pacifist, 1941).

“To punish me for my contempt for authority, fate has made me an authority myself.”

“Dear Posterity, If you have not become more just, more peaceful, and generally more rational than we are (or were)-why then, the Devil take you. Having, with all respect, given utterance to this pious wish, I am (or was) Yours, Albert Einstein.” (From a time capsule placed in 1936).