A researcher is building a tool that will help police locate a body earlier -- and possibly tell when the victim died. 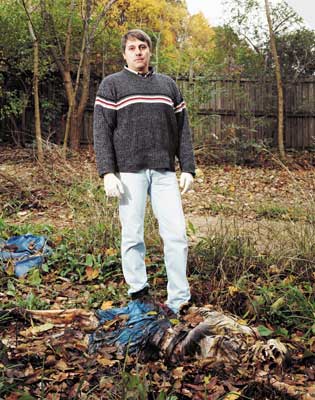 STANDING IN DEATH’S DOMINION
Arpad Vass surveys the Body Farm at the University of Tennessee, where his grave-finding machine will be field-tested on volunteers who have donated their bodies to science.

Right behind employee parking for the University of Tennessee Medical Center in Knoxville, a line of bushes all but hides a gray privacy fence. More than 7 feet tall and topped with razor wire, the fence?s wooden slats shield the public from the world?s only human decay research station, which readers of this magazine have glimpsed more than once.

So morbid-seeming are the experiments that unfold here that Patricia Cornwell, the doyenne of gruesome murder mysteries, once said of her visit, ?Every cell in my body cried out against the place.?

Me, I could hardly wait to get back to the site, where I have tagged along as some of the world?s most unusual forensic scientists explored their research.

Strange as it may sound, the sun-dappled meadow and shady hillside trails of the Body Farm have always struck me as more Pooh?s Corner than Night of the Living Dead. Calmness envelops this place, notwithstanding the 30-odd corpses in residence at any given time. Though stuffed in garbage bags, rolled inside carpets, tied to tree trunks, covered with concrete or simply moldering down to bone amid the ivy and fallen leaves, the Body Farm?s subjects are not the victims of horror or neglect. They have willed their bodies to a final mission — service in the forensic study of human decay. Scientists attend to these volunteers with respect, even a strange sort of affection.

So, on a recent rain-washed and chilly morning, I pressed my face between the padlocked gates of the Body Farm and called out the name of Arpad Vass, a slightly graying forensic anthropologist and research chemist who had promised to show me a new forensic technology now in development. Vass is at the forefront of research into new technology at the 2-acre alfresco mortuary. His latest project: to fashion an electronic nose that will not only detect the gassy exhalations of buried corpses but also ?read? those gases to determine a victim?s time of death.

Time of death is still among the most elusive and inexact determinations in forensic science, and it?s often critical when police want to connect a body to a suspect. Vass hopes to move beyond studying ecological clues, which has long been the Body Farm?s focus. The observation of insects on bodies has yielded important techniques for estimating time of death, but, Vass believes, ?The time for subjective observation is past. It just won?t stand up in court anymore. I?m pushing hard for forensic anthropology to get a grounding in the hard sciences.?

Last year?s Danielle van Dam murder trial, in which David Westerfield was convicted of kidnapping and murdering the 7-year-old San Diego girl, reinforced Vass? point. Prosecutors and defense lawyers called on four of the world?s leading forensic entomologists and anthropologists to establish when the killer dumped the victim by the side of a road. No two of them could agree on the age of the maggots found on her body. Good thing the case didn?t hinge on insect evidence.

Vass proposes a molecular-signature approach to the problem. If he can identify a set of human-decay chemicals that changes in a predictable way over the days, months and years after death, time-stamping a murder will become a matter of running a vapor sample through the kind of analytical equipment found in any forensic lab.

In the short term, Vass pursues a simpler goal. A not-to-be-named federal agency funds his study because it wants a gadget to sniff out clandestine graves. There is, of course, an analogue in nature for this electronic body sniffer: the hound. ?We already know that cadaver-searching dogs can do it,? Vass says. ?They?re probably homing in on just one or two key molecules seeping out of the ground.?

Like humans, however, dogs have bad days. They get tired and distracted. They suffer the occasional cold. Training a cadaver dog and maintaining its skills with regular workouts is tricky, given the nature of the scent in question.

Vass believes the technology is at hand to build a hard-wired grave sniffer — just as soon as he can isolate the chemical targets for its electronic nose. This is what I?ve come to see, so Vass unlocks the farm gates and leads me past a half-dozen moldering corpses to a red-clay knoll where ?02-25,? a middle-aged stroke victim, lies 2 feet under.

Seven months ago, Vass slipped 02-25 into the ground clad in jockey shorts and partially wrapped in a sheet. ?Most murder victims get carried to the hole inside something. A blanket, garbage bag, you get the idea.? The shallow grave is also typical. ?Statistically, few killers dig deeper,? says Vass.

This grave site?s only significant departure from a conventional crime scene is that 02-25?s grave has some elaborate plumbing. A network of slender, perforated pipes — a French drain of sorts — runs above and below the remains, collecting the vapors generated as millions, possibly billions, of bacteria degrade and recycle the soft tissues and bones. To one side of 02-25, the pipes make a 90-degree turn, emerging from the ground as three sampling ports.

To each, Vass attaches a ?triple-sorbent? trap — a small metal cylinder packed with three grades of carbon granules for collecting light, medium-weight and jumbo-size molecules. As he has done more than 30 times in the past seven months, Vass pulls the subterranean vapors up through the sampling ports and into the carbon traps with the help of a portable generator. Later, he?ll take an overnight sample of the gases that are collecting under a stainless-steel hood placed over the grave.

A biochemist by training, Vass traces his interest in decomposition to a highly publicized blunder on the part of the Body Farm?s esteemed founder, William Bass. Instead of hiding what a lesser anthropologist would have considered a humiliating error, Bass published a paper describing how he had mistaken the well-preserved body in a vandalized Civil War grave for a modern murder victim. When Vass read the account in the late 1980s, he realized that leachate from the Confederate soldier?s solid lead coffin might explain why bacteria never consumed his 113-year-old corpse. A case of preservation by lead poisoning, as it were. The young chemist decided to enroll in Bass? world-renowned research program.

Now Vass works out of nearby Oak Ridge National Laboratories, where he has access to the equipment and expertise needed to develop the electronic body sniffer.

Smith accomplishes this feat by extracting the chemicals caught in Vass? triple-sorbent traps and running them through a gas chromatograph?mass spectrometer. The GC-MS separates out the sample?s compounds and helps Smith run them against a computerized library of hundreds of thousands of chemicals.

Among the most interesting so far has been an uninterrupted series of organic molecules known as alde-hydes. This ?seven card straight? of
chemical markers runs from the four-carbon aldehyde butanal (C3H7CHO) up through the 10-carbon decanal (C9H19CHO). Best of all, the series has been present in every one of 02-25?s vapor samples analyzed to date.

If even one of these markers persists over the next year, it could become the target for Vass? planned grave detector. If several persist in amounts that change predictably over time, the detector technology could evolve into the postmortem clock that has long been the dream of forensic scientists.

Unlike the behavior of insects, whose colonization of open-air corpses can vary tremendously depending on factors such as weather, season, even the thickness of a victim?s clothing, the bacterial decay of a buried corpse marches forward in a fairly consistent fashion. ?Buried bodies give us relatively uniform decomposition with a minimal amount of variables,? Vass says. Even a shallow grave keeps its contents relatively bug-free and nicely chilled to between 55