A rainbow actually forms a circle. The center of the circle is always on an imaginary line between the sun and your head. 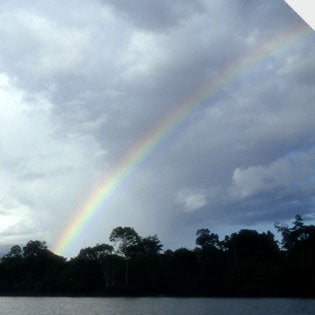 Imagine looking at a rainbow off to the east. The sun is setting behind you in the west. White sunlight (a combination of all the colors in the rainbow) travels through the atmosphere, flies eastward past your head, and hits the water droplets as they fall from a passing storm. When a beam of light hits one of these droplets, one of two things can happen: The light could simply pass through, or, more interestingly, it could hit the front of the droplet, bend as it enters, then reflect off the back of the droplet and leave through the front, back toward us. This is the light that forms rainbows.

The amount light bends as it passes through the droplet depends on the light’s wavelength, or color — red light bends the most, orange and yellow slightly less, and so on, down to violet, which bends the least.

Since each color is bent through a specific angle — red light comes from the sun and is reflected back at an angle 42 degrees away from its original direction, while blue light bends only 40 degrees — each color appears at a different place in the sky. Red, say,
denotes all those locations in the sky 42 degrees away from an imaginary line connecting the sun to the back
of your head. Together, these places trace out an arch. Since blue appears only 40 degrees from this imaginary line (which also connects your head to its shadow), the blue arch of a rainbow
is always below the red.