Dispatch from Copenhagen: Is the Financial Crisis Saving the Planet?

At the climate-change congress in Copenhagen, attendees find an unexpected reason for hope 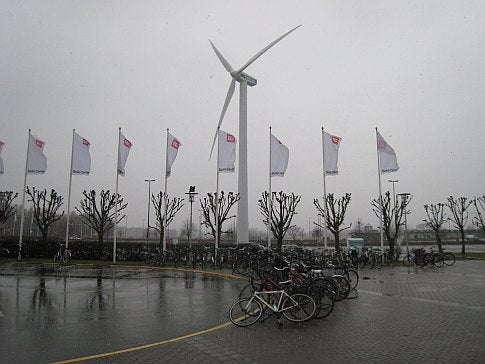 An interesting theme has begun to emerge in Copenhagen: that the financial crisis might end up saving the world. Sure, it’s painful now, this line of thinking goes, but it gives us a chance to build a low-carbon global economy that we might not have had otherwise. And in the meantime, greenhouse-gas emissions could fall sharply as a result of depressed economic activity — factories closing, less driving, less flying, and so on.

Two influential English economists argued as much today at the International Scientific Congress on Climate Change. In a morning plenary talk, Nicholas Stern of the London School of Economics and Political Science explained the reasons why he’s more optimistic about the likelihood of a new, effective global climate agreement today than he was two years ago: the rapid advancement of low-carbon technology, the deepening of public awareness, the Obama administration’s commitment to cutting greenhouse-gas emissions to 80 percent of 1990 levels by 2050 — and the fact that the recession provides an opening for completely remaking the global energy economy. “It should be easier because we have an economic crisis,” he said. Labor is cheap, after all. That will make it cheaper to hire the workers to, for instance, rebuild the electrical grid in both the U.S. and Europe. Besides, he argued, the financial crisis offers a clear lesson. With this financial catastrophe fresh in our minds, we should realize more than ever that if we wait to address a looming crisis, it will bite us that much harder in the end.

In a post-lunch press conference, another economist, Terry Barker, who heads the University of Cambridge’s Center for Climate Change Mitigation Research, argued that meeting climate goals like those set by the Obama administration will have the pleasant side effect of increasing economic growth. He called the financial crisis a “timely stimulus,” not an obstacle.

Conversely, continuing with what everyone in this crowd calls “business as usual” — that is, our current level of fossil-fuel consumption — will cost far more money than it will save. “High-carbon growth destroys itself,” as Stern put it. How? Here are a few examples. Rising sea levels will force the relocation of millions of people who live in impoverished, low-lying countries like Bangladesh, and that will cost enormous amounts of money. According to research presented by Tord Kjellström of Australian National University, rising temperatures could mean that billions of people who live near the equator will be forced to work fewer hours a day, thereby producing less and earning less money. Outdoor laborers in New Delhi, for instance, are already 10 percent less productive now than they were in 1980 because of rising temperatures. In a world that’s 3.6°F hotter — which is emerging as the best-case scenario — those people would be 20 percent less productive than they are today. Similar scenarios could play out around the world. And that matters, because time is money.

In other words: Serious action on global warming might happen not because it’s an ethical thing to do, but because it’s the only economically viable way forward.