Undersea Mating Habits of the Stars 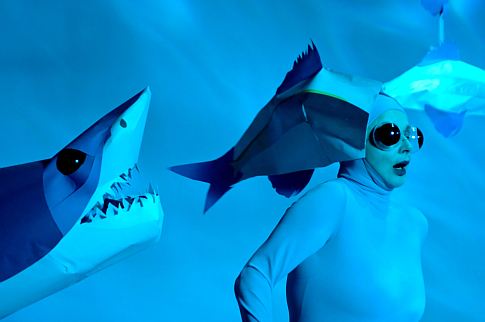 This season moves from the insect world to the water, and includes a whale, a starfish, a limpet, and an anglerfish (although not all at once — that would break with the scientifically accurate nature of the program).

No animals are harmed in the making of these productions, not even Ms. Rossellini — despite the quantity of paper that goes into the costumes, she has suffered no paper cuts.

How do you incorporate pleasure and emotion into what you’re showing when you’re portraying animals having sex?
It’s hard to know: sometimes it comes from something that I’ve read, sometimes there has been an experiment. I did read sometimes they put devices that can see if the pressure of an animal goes up or if there’s any change while they’re mating. We don’t know if this is excitement or pleasure but there is physically a change in the heartbeat, if they have a heart.

An animal obviously doesn’t have the intelligence of man, but can he have the feeling? When he is afraid does he feel the same as we fear? We don’t know that — those are the questions that have been asked from the beginning of history, so I don’t have the answer to them. Sometimes I give them a human expression because I am the one that interprets the animals, but obviously these are comical pieces so I’m not going to go in depth into a debate whether a snail has pleasure having sex or not. There must be some sort of an appeal, otherwise they would avoid it.

So you consider these comical pieces?
I do. I like people to laugh and then to say, “Oh, I didn’t know that about an animal,” and hopefully make the animal more interesting to them.

Can people learn something from these films about human sex?
They can’t. You know, this question has been asked by everybody. [There’s a perception that] if it doesn’t pertain to a human being, if it isn’t useful to a human being, if it doesn’t serve human beings, it’s not worth saving or it’s not worth talking about. Do things have a right to exist just because they exist? This is at the center of a big ethical question. So no, there isn’t anything you can learn about sex that will apply to your sex life with your partner. The only thing is the great variety and the great wonderment of nature.

How do you describe the distinct, sort of deadpan tone you use to narrate these?
There is a tone and I want the tone to be comical and I think that’s the right delivery. I just do what I think is right and what I think conveys a sense of wonderment. I don’t want to be preaching; I’m never preaching anything. You write and you film with your instincts what’s right or wrong. That’s the reason why I play all of the characters instead of using actors because I’m afraid that I wouldn’t know exactly what word to use to describe what is the tone that I would like to have in the animals when I’m playing them.

Which was your favorite animal to perform?
I don’t really have a favorite animal. I think that the way I go about it is to show the greatest variety of how animals mate. Because it’s amusing, all the varieties and all the particular ways. If there was one way to procreate it wouldn’t have been as funny or as amazing as the many different ways.