Save a snowflake for decades

All it takes is a drop of chilled superglue. 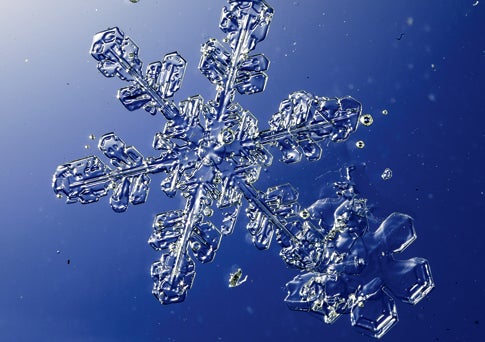 Want a permanent souvenir of the snowstorm? You can preserve a snowflake in superglue, like a fly in amber, to make it last for decades. Just follow Theodore Gray's instructions for trapping a snowflake in superglue, and guarantee that you'll remember this snowstorm forever. For an easier memory, just feast your eyes on these gorgeous close-up photos of snowflakes. Theodore Gray
SHARE

Ever wanted to catch a snowflake and keep it forever? You can. The image above is a photograph of a snowflake that fell in January 1979, but it isn’t an old photo. It is a recent shot of a snowflake that’s been sitting in chemist Tryggvi Emilsson’s desk for decades, locked in a drop of that miracle of modern chemistry we call superglue.

The “super” in the thin, runny adhesive, which was invented during World War II, is the small molecules in it called cyanoacrylate monomers that penetrate and interlock with the microscopic forms of anything they touch. The glue hardens when the monomers link together, or polymerize, head-to-tail into long chains called polymers. This process is triggered by any minute trace of water or water vapor and progresses very quickly, which is why superglue hardens more rapidly on moist things, such as your fingers, than on the thing you’re trying to glue.

The tendencies of superglue to seep into the tiniest nooks and crannies, harden on contact with water, and solidify rapidly make it perfect for taking an impression of something very small, made of water, and ephemeral, a fact that struck Emilsson during the winter of ’79.

He’d been fascinated by Wilson A. Bentley’s famous 1931 book Snow Crystals, which contains 2,453 snowflake photographs taken over 47 freezing Vermont winters. Bentley had to work quickly to get each shot before the radiant heat from his body melted the flake. Despite being from Iceland (or perhaps because of it), Emilsson wasn’t about to endure long bouts of biting cold, so he came up with the superglue method described below, which lets you capture snowflakes outside and examine them later in the comfort of your living room. In front of a crackling fire, if you like.

Bentley could save just photographs, not the real snowflakes he longed as a child to take home to show his mother. One can only imagine what a collection he would have built if he’d had a few hundred tubes of superglue. Perhaps we’ll see when a modern-day Bentley comes along. Who knows, maybe it’s you.

This article was originally published in the March 2006 issue of Popular Science, under the title “Save a Snowflake for Decades.”