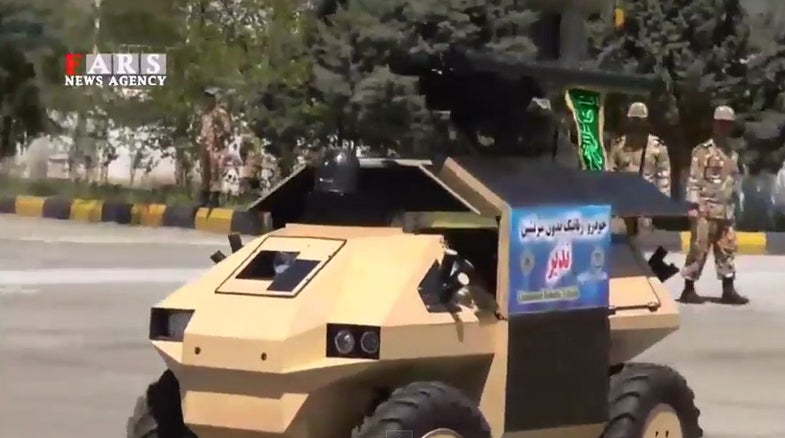 Iran’s new Nazir robot car has a deadly secret. Inside the unmanned ground vehicle, there’s a mechanical arm and what appears to be the cylindrical casings for two missiles. A camera turret mounted on a pivot at the front of the vehicle provides a way for remote drivers to see what exactly the Nazir is looking at. And small clusters of grenade dischargers mounted at both the front and rear of the vehicle might release clouds of smoke to obscure the Nazir from enemy fire.

Watch it parade on display below:

Army Recognition spotted the Nazir as one of the vehicles on display in Iran’s Armed Forces Day, which is celebrated every April 18. As described, the robot can operate at distances of over a mile and can carry 1,300 lbs, including either a pair of missiles or a remotely controlled machine gun. Army Recognition speculates that the missiles are man-portable anti-air missiles, commonly fired from the shoulders of soldiers, but given the configuration of the vehicle, an anti-tank weapon is not out of the question.

In March, an Iranian general promised robot soldiers. With the new unmanned ground vehicle, it looks like Iran has their first batch.