What it means for Ukraine 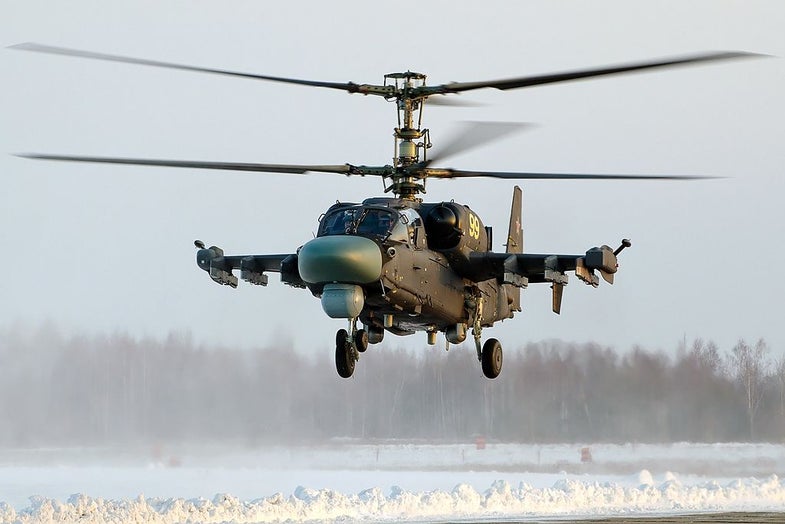 Russia recently ordered a batch of new attack helicopters, including 32 that could go onto a new amphibious assault ship. There’s just one hitch: France is building that ship, and following Russia’s invasion of Crimea and support for Donetsk separatists in Eastern Ukraine, there’s a lot of international pressure for France to cancel the order.

The Mistral class ship is designed to carry up to 700 troops, over 60 land vehicles, and around 30 light helicopters within landing distance of a coast, where they will (in peaceful situations) arrive and rescue storm-rattled populations, or (in wars) go forth and take the beaches. The contract with French shipbuilders specified two Mistral class ships built in France, and then two more built in Russia. They’ll be the first amphibious assault ships for Russia. It’s likely each of the four ships would only fly eight attack helicopters, so the full order for 32 indicates that Russia expects full delivery of the ships. The first completed vessel is the Vladivostok, and France is set to deliver it late this year.

It’s unclear what military use the Mistral would add to the war in Ukraine, even with the planned Ka-52K helicopters. Dubbed the “Alligator,” this chopper is primarily an anti-tank weapon, and is limited to less than 300 miles of range. If Russia were to escalate its involvement in Ukraine’s war from supporting separatists to formal participation, Ka-52Ks could strike targets in Odessa and beyond. Or perhaps Russia would use them instead on the other side of the Black Sea, should tensions like the 2008 Russia-Georgia war flare up again. Presently, the Mistral-class ships wouldn’t let Russia do all that much more in the wars it’s most likely to fight, as Russia shares land borders with the neighbors they’re most prone to invade.

Regardless of actual military utility, the international community is less excited about the sale, especially after Russia’s seizure of Crimea and Moscow’s ongoing support for the separatists that shot down a Malaysian airliner. Officials from the United States, Ukraine, and Japan have all expressed disappointment that France still plans to sell the ships. In a barely subtle move, yesterday Swedish Foreign Minister Carl Bildt hinted that Sweden agrees, tweeting this: