A project spanning robotics, computer science, developmental psychology, and machine learning aims to figure out how one-year-olds learn to interact with the world. 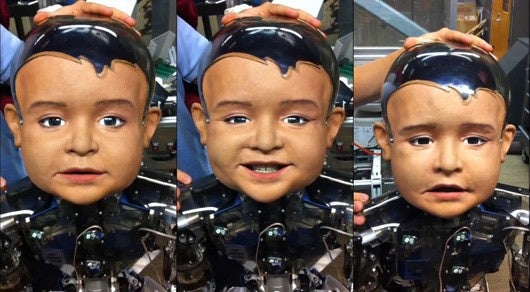 Anyone who has witnessed the development of a newborn into a toddler knows that babies progress fairly quickly from making seemingly random, spastic body movements to interacting with the world in what seems a much more natural way–through touching and grabbing as well as through social cues, like smiling, grimacing, and other facial expressions. Now we’re getting our first real glimpse of a multidisciplinary project mashing up robotics, neuroscience, computer vision, developmental psychology, and machine learning, a project led by University of California San Diego researchers has created Diego-san, a robotic one-year-old that learns to control its body and interact with others the same way a human baby does.

At four feet 3 inches tall and 66 pounds, Diego-san isn’t a perfect physical analog for a toddler (miniaturizing all of the parts would have driven Diego-san’s price tag way up), but his 44 pneumatic joints and the 27 moving parts in his extremely life-like face make for a humanoid that can mimic human movements–at least those of a one-year-old–quite deftly. The high definition cameras in his eyes take in the world around him–gestures, movements, facial expressions–and the team is developing algorithms that allow Diego-san to “learn” from these cues the same way a human baby would (to the extent that developmental psychologists understand this process, anyhow).

The video below is the first of Diego-san that’s been publicly released, depicting the robot moving through a variety of facial expressions that it has learned from the humans it interacts with. Fair warning: Diego-san flirts dangerously with the uncanny valley phenomenon, as his facial expressions are just life-like enough to be somewhat creepy. But the ability to build a humanoid robot with this kind of human-like sophistication–particularly where the face is concerned–is fairly amazing.

Diego-san’s research goals go both ways. for the roboticists and computer scientists on the project, Diego-San is granting a deeper understanding of sensory motor intelligence from a computational vantage point. From the other side, by mimicking the development of human babies Diego-san is helping developmental psychologists understand this phase of human development during which children first learn to interact with their physical environment and the other humans that populate it.