Equipped With a Hot Glue Gun, New Robot Builds Its Own Custom Tools

Most robots are designed to do a couple specific things, which is one reason why the adaptability requirements in DARPA’s... 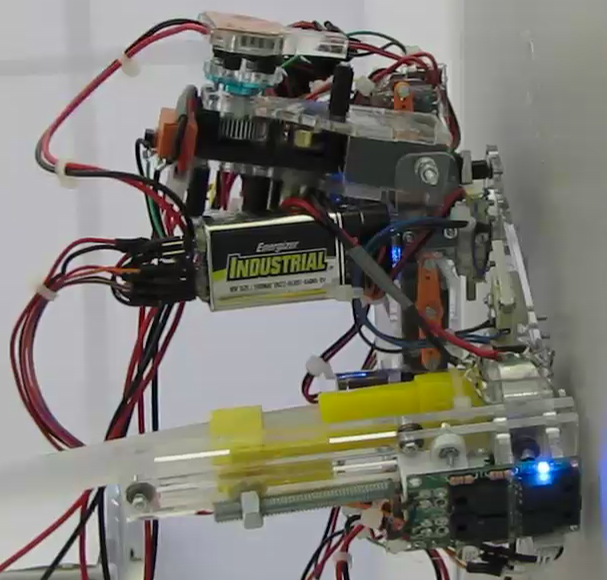 Most robots are designed to do a couple specific things, which is one reason why the adaptability requirements in DARPA’s robotics challenge will be so interesting. But not everyone has the funds or know-how to build a robot that can do anything. Instead, the robotics whiz teams at ETH Zurich are giving robots the ability to build any new tool for itself, whenever the need might arise. It just comes with a hot glue gun, which the robot uses like a low-tech 3-D printer.

Other robots have used hot glue guns before, primarily to climb up walls — Israeli researchers and the ETH researchers themselves are among those who’ve built such surface-scaling bots. But if you’ve ever played with a hot glue gun, you know the tool can be used to do much more than form an adhesive — you could make any shape you want and simply let it cool, hardening into an milky-looking object of your design. That’s what this new robot does.

It uses hot glue to form a base and sides of a cup one layer at a time, much like a 3-D printer would sinter materials one layer at a time. The robot also builds a handle and attaches it to the cup so it can tote the water vessel between two separate containers. It takes about an hour. All the tasks were performed autonomously, reports IEEE Spectrum, which spotted the bot at the ICRA conference over the weekend. But the cup design was pre-programmed.

Ideally, future versions of this robot would be able to figure out exactly what type of tool is needed for a given task, and be able to design and build said tool. It certainly works more slowly than a 3-D printer, but it’s much simpler, too. Watch in the video below.