A heat wave made this bridge too swole to function

Climate change can pose some unexpected challenges to infrastructure. 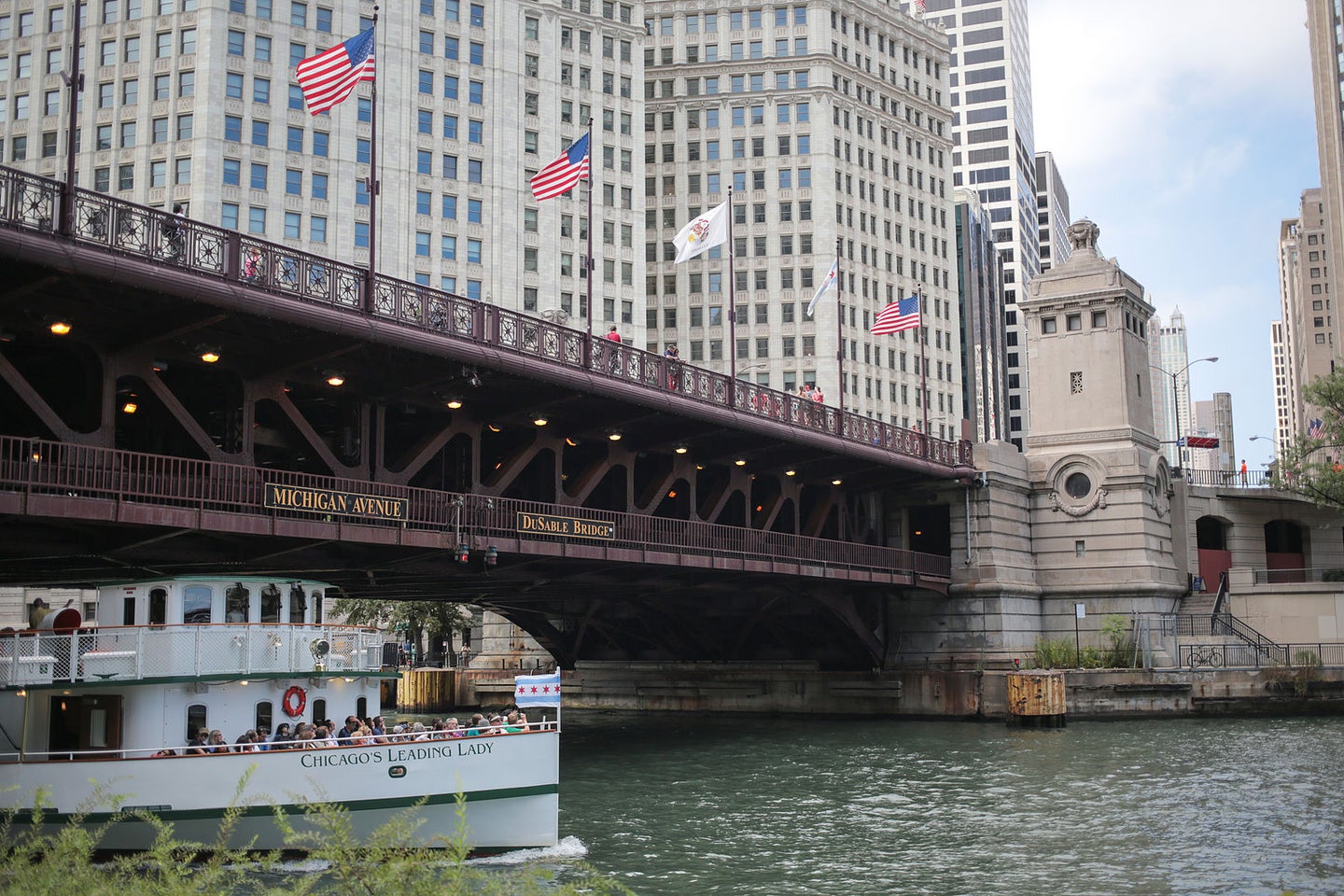 Firefighters had to hose down the DuSable Bridge in Chicago after the steel surface spiked to more than 100 degrees Fahrenheit.

It was so hot last week, even steel bridges were sweating. The DuSable Bridge in Chicago overheated enough to stop working. While it wasn’t dangerous for drivers, the bridge couldn’t open for boats, and had to be closed for a half hour while firefighters hosed it down with cold water.

The 98-year-old double-decker bridge shuttles two levels of traffic back and forth over the Chicago River, and opens its decks to the heavens to let sailboats pass through. Baking under the sun for days on end, the joints of the steel bridge swelled, and were stuck in place. Luis Benitez, chief bridge engineer for the Chicago Department of Transportation, says the surface temperature of the bridge had climbed above 100°F that week. The steel finger joints—long, finger-like parts that accommodate expansion as cars travel over the bridge—interlock leaving a bit of space between each part, but the heat caused them to expand enough to rub together. You can think of it like a bridge with arthritis; the joints had become too inflamed to move properly.

“The temperature was getting too hot, and the bridge isn’t just expanding longitudinally, it was expanding sideways,” says Benitez. “Those two pieces of metal started rubbing together causing friction. Everything is so finely tuned, if you tried to force them apart, those joints can come loose or the expansion could get damaged.”

For the finger joints to touch, Benitez says the steel would have had to expand around an eighth of an inch. That doesn’t seem like much, but in the world of sweaty steel, it’s enough to temporarily shut down a bridge.

Although heat waves like the one that suffocated most of the eastern U.S. recently won’t cause a bridge to suddenly collapse, spells of hot, humid weather can cause a lot of problems for infrastructure. Materials like steel, cement, and asphalt—basically the building blocks of every city—eagerly absorb heat, and can reach surface temperatures of 140 degrees on a scorching day.

“The problem is in high heat waves, steel can expand if its above its tolerance limit,” says Rae Zimmerman, director of the Institute for Civil Infrastructure Systems at NYU’s Robert F. Wagner Graduate School of Public Service.

“When it expands the only way it can go is to the side, so that’s why we see wavy rail lines. Wheels also become deformed in heat,” she says. “When trains run over the rail lines, they also increase the temperatures of the lines themselves and make the problem worse.”

In 2012, a “heat kink” on a train track in Illinois caused a freight train to derail. Thirty-two cars loaded with coal flew off the tracks onto an overpass, which collapsed and killed two people. Heat causes problems for airlines as well. The tarmac was so hot at Reagan National Airport near Washington, D.C. in 2012, that a plane’s wheels started sinking into the ground. Even unloading all the passengers and luggage from the plane wasn’t enough to unstick it, and the flight was delayed for three hours. During extended periods with temperatures festering above 90 degrees, heavy trucks and commercial vehicles can accelerate damage to roads already stressed by prolonged exposure to heat just by idling on them in traffic.

Besides planes, trains, and automobiles, Zimmerman says extreme heat can be a huge problem for systems that are already susceptible to overheating, like power lines. High temperatures can soften power lines and cause them to sag, which is not only dangerous for the public, but can impact other systems reliant on those lines, such as city streetcars in places like Boston, Toronto, and San Francisco.

The build-up to a “heat kink” is slow, but the buckle is fast.

Problems with heat and infrastructure are exacerbated in concrete jungles like New York City, which generates what’s known as the urban heat island effect. Dense metropolises swathed in dark concrete and asphalt absorb and radiate a ton of heat, which creates unbearably hot surfaces and is why Times Square is always boiling in the summer. Heat waves in big cities can also indirectly cause power outages as millions of air conditioners come to life, and electric grids strain to keep up with demand.

“When equipment heats up, it isn’t meant to run like that,” Zimmerman says. “The thing about climate change is we’ll continue to have persistent heat problems. But we do have areas of world that are very hot and these systems run because they’re protected by more heat resistant materials.”

Nowadays, we have access to better heat-resistant materials, like concrete that reflects more light and modified asphalt with higher melting points. But for century-old structures like the DuSable Bridge, engineer Benitez says not much can be done for old infrastructure in a heat wave, except have a big hose on hand.

“There’s only so much you can do,” he says. “You can work with nature, but nature doesn’t work with you.”