The little lander that's been silent gets a final farewell 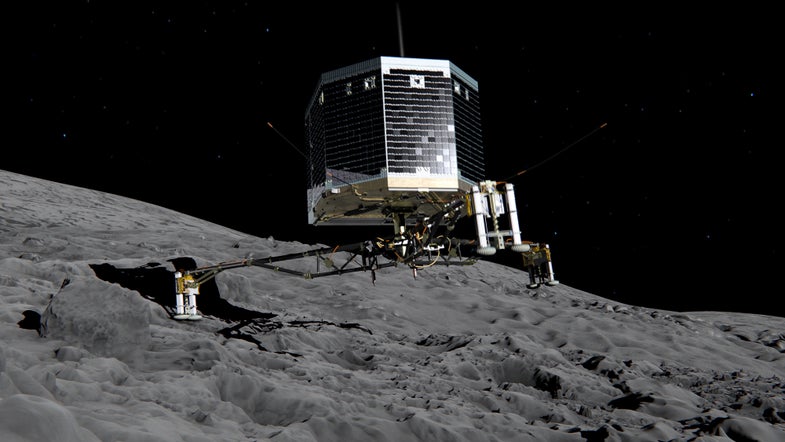 Honorable mention goes to the ESA's Rosetta spacecraft, which made headlines last year for being the first manmade vehicle to land on a comet. Except the "landing" didn't go as smooth as the agency had wanted. On November 12, 2014, Rosetta released its Philae lander, which traveled down to the surface of comet 67P/Churyumov-Gerasimenko. Philae was equipped with harpoons, meant to shoot out and anchor the lander to the comet's surface. However, the harpoons failed to deploy, and mission specialists admitted it's possible Philae bounced off the comet before touching down for good. "Maybe today we didn't just land once, we landed twice," landing manager Stephan Ulamec joked at a press conference. ESA
SHARE

The last time we checked in on Philae, the small spacecraft that landed on Comet 67P/Churyumov–Gerasimenko in November 2014, things were not looking good. And now, after being silent since July 2015, ground control is saying a final farewell to Philae.

“We are not sending commands any more and it would be very surprising if we were to receive a signal again,” said Stephan Ulamec, Philae project manager at the German Aerospace Center.

Philae’s touchdown in November went awry, leaving the lander in a dark and somewhat mysterious location, operating on battery power alone. After 60 hours, the battery died and Philae went silent. Although the lander got in touch with the Rosetta orbiter a few times last summer, the comet is now moving farther and farther from the sun. That’s not good news for Philae, since it needs solar power to charge, and the comet freezes over with night temperatures of -180 degrees Celsius–too cold for the lander to function. Philae’s ensuing silence now is likely due to failing transmitters and receivers and a coating of dust on its solar panels.

But that’s certainly not to say that this mission was a failure. Despite Philae’s rocky road, the lander sniffed out organic molecules on the comet, and taught us quite a bit about the sandy makeup of the comet. Indeed, despite the hibernation, the European Space Agency claims that “about 80% of its initial planned scientific activities were completed.”

Although the Rosetta orbiter won’t be sending any new signals to Philae, it will continue to listen for communications from the lander. If Philae’s Twitter account is any clue, the lander isn’t planning on giving up either.