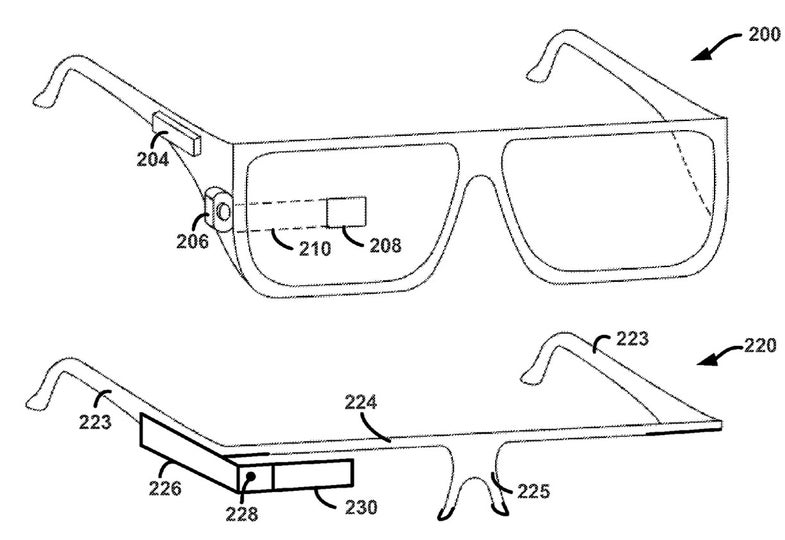 Since Google Glass transitioned earlier this year from experimental Google X moonshot to viable idea, we haven’t heard much from the newly-formed department. The Explorer program was shut down when Nest alum Tony Fadell took over the project, and in the intervening months, no designs have leaked.

However, a Google patent published last week details structural elements that could be key to future generations of Google Glass.

The patent mainly concerns a component that varies in tightness to keep snug hold on the user’s head. The component, a piezoelectric material(that is, a type of material that gathers an electrical charge through mechanical forces), is located in the side-arms of the eyewear, and may be activated based on how much the user is moving. (I write “may” because the word is used exactly 450 times in the document.)

The patent describes a situation wherein a user is jogging. The eyewear would be able to calculate running speed based on an accelerometer and gyroscope, and could tighten or loosen itself if necessary, or even physically move the display to give the user a better angle. Movement data could also come from a separate wearable device.

However, the component wouldn’t need any tiny plastic cogs or other moving parts to do all this, because the piezoelectric material is just intelligently flexing to reposition itself to give the user the best view. In essence, Google is designing glasses that give complete screen visibility, no matter the circumstance.

In detailing an “example” device, Google’s patent talks about how a video camera, capacitive touch control, and the wonders of “detector 126” (see diagram). It seems like the engineers have big plans for detector 126, which could be an eye-movement tracking sensor, or infrared camera, or even a 3D scanner (maybe retina-scanning authentication?). The idea of having an entire lens act as a display is even brought up.

Google’s patent references other previously accepted patents regarding smart footwear, eyewear with a bone conduction transmitter, and a neural-sensing device .

The patent itself was filed by Mitchell Joseph Heinrich and Eliot Kim, who work in industrial design at Google X. The pair recently also published a patent on a bone-conductive audio transmitter.

Patents aren’t production schematics, but the document signals Google innovating in the wearable space with fresh ideas for head-mounted displays. And if it works anywhere near described, maybe “jogging glasses” that find and highlight potholes or loose terrain could be in our future.