Can an ex-Apple creative do what Microsoft and Google couldn't? 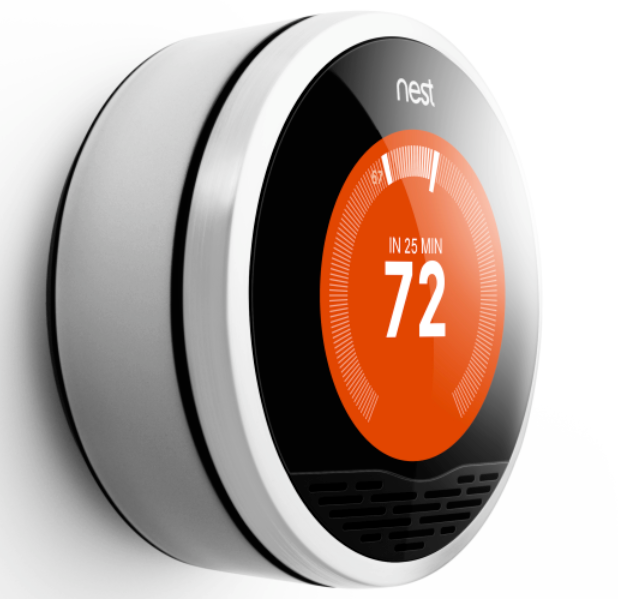 A new thermostat designed by the brains behind the iPod promises to save money by learning your household habits, encouraging energy efficiency while looking snazzy on the wall. The Nest looks like a 21st century version of the circular Honeywell heat controls many people grew up with, and it promises a modern, simple solution for lowering utility bills.

The Nest’s key function is its ability to learn your personal schedule and adjust its settings accordingly, which its designers say is much more efficient than programming it yourself. A single-degree difference here and there can add up to significant savings over time; to encourage smarter settings, Nest displays a friendly green leaf when you’re turning the dial in the more efficient direction. It also helpfully displays how long it will take to set your house to the desired temperature, a handy function for those of us who turn it up way too high to expedite warming. It keeps refining its learning habits over time.

It has a motion sensor that enables an auto-away feature, lowering the heat or raising the air conditioning when the sensor detects that no one’ home. It has built-in WiFi, so you can even control the Nest from a smartphone or tablet app. The dial glows red when the heat is on, and blue when the A/C is on. The brushed stainless steel dial picks up the color of the wall where it’s mounted, seamlessly blending in with your house like the best gadgets should. It goes on sale next month for $249, available at hardware stores and electronics stores.

Now this sounds pretty cool, but remember that other smart, catchy connected home energy-savings projects have failed to make a splash; Microsoft’s Hohm and Google’s PowerMeter both faded after lackluster reception, and other energy-efficiency gadgetry is already available from Panasonic, GE and others. These products were also designed with the goal of educating consumers about their own energy habits, and hopefully motivating them to live more efficiently.

They didn’t involve a closed-loop gadget, however, instead using software that integrated with existing home tech. Is a cool gadget the answer? If so, it may not be surprising that its creator also brought us the iPod. Tony Fadell is founder and CEO of Nest, which he started after leading the design team that developed the iPods and the first three generations of iPhones. “Together with the team, co-founder Matt Rogers and I set out to reinvent the thermostat using advanced technologies, high-quality manufacturing processes and the thoughtful design elements the iPhone generation has come to expect,” Fadell says in a company news release announcing Nest.

Could this Apple-rooted product succeed where Microsoft and Google haven’t? Tell us what you think in the comments.