Sony Device Aims To Turn Any Glasses Into Smart Glasses 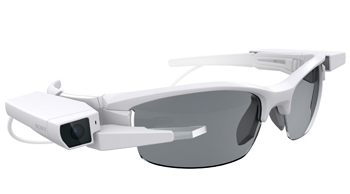 Among the problems with Google Glass—and there are many—is a general lack of style. Those who don’t wear glasses regularly can find it cumbersome, while those who do may find it doesn’t play well with their existing models. Sony’s aiming to solve those problems with a new microdisplay that can turn any pair of glasses into a Google Glass-like device.

Unsurprisingly, Sony’s gadget looks a lot like Google Glass, with a small display that extends in front of the wearer’s eye, and a pair of bulky units on either side of the head: one contains the hardware, including an ARM processor, Wi-Fi, Bluetooth, and sensor hardware, while the other holds the battery. So it probably isn’t going to win any style contests, either.

Sony is using Organic Light Emitting Diodes (OLEDs) to create the microdisplay, which has a resolution of 640-by-400 pixels—slightly larger than Glass’s 640-by-360 pixels, but using a smaller physical display: it’s just 0.23 inches in diagonal size, compared to Glass’s 0.375 inches. That’ll help Sony’s approach take up less of the space in front of your eyes, making it less intrusive as you go about tasks that don’t require you refer to the display. OLED can also provide better color representation, higher contrast, and easier visibility in a variety of lighting conditions, like bright sunlight.

Of course, the real advantage of Sony’s approach is that it can be added or removed from existing glasses (or goggles or sunglasses) on the fly. That means that you don’t need to choose between checking out wearable technology and keeping those glasses you really like (or splurging for another pair of glasses…or switching between your normal glasses and Google Glass). And, unlike Google Glass, you wouldn’t need to wear Sony’s gadget all the time; you can simply take it off your glasses when you don’t need it.

Sony also says it’ll provide a software development kit to allow programmers to write apps for the device. In an another interesting choice, Sony’s opting for a hybrid approach with this device: it can either be used in conjunction with a smartphone, with the two communicating via a wireless connection, or—since it has its own onboard processor—on its own, with apps downloaded directly to it.

Many of Sony’s proposed uses focus on the consumer realm, especially sports: It suggests applications for golf, cycling, and coaching. But the company also sees room in the industrial space, such as in a factory setting where workers could be given instructions without needing to take their attention completely away from the task at hand.

Of course, Google Glass hasn’t really caught on itself yet, and it’s unclear how much more energy the company plans to put into it. Sony’s device—which will be shown off at the Consumer Electronics Show in January but doesn’t yet have a price tag or a shipping date—may be a too little, too late addition to the field of augmented reality.