Google vs. DuckDuckGo vs. Bing—is it time to switch your search engine? 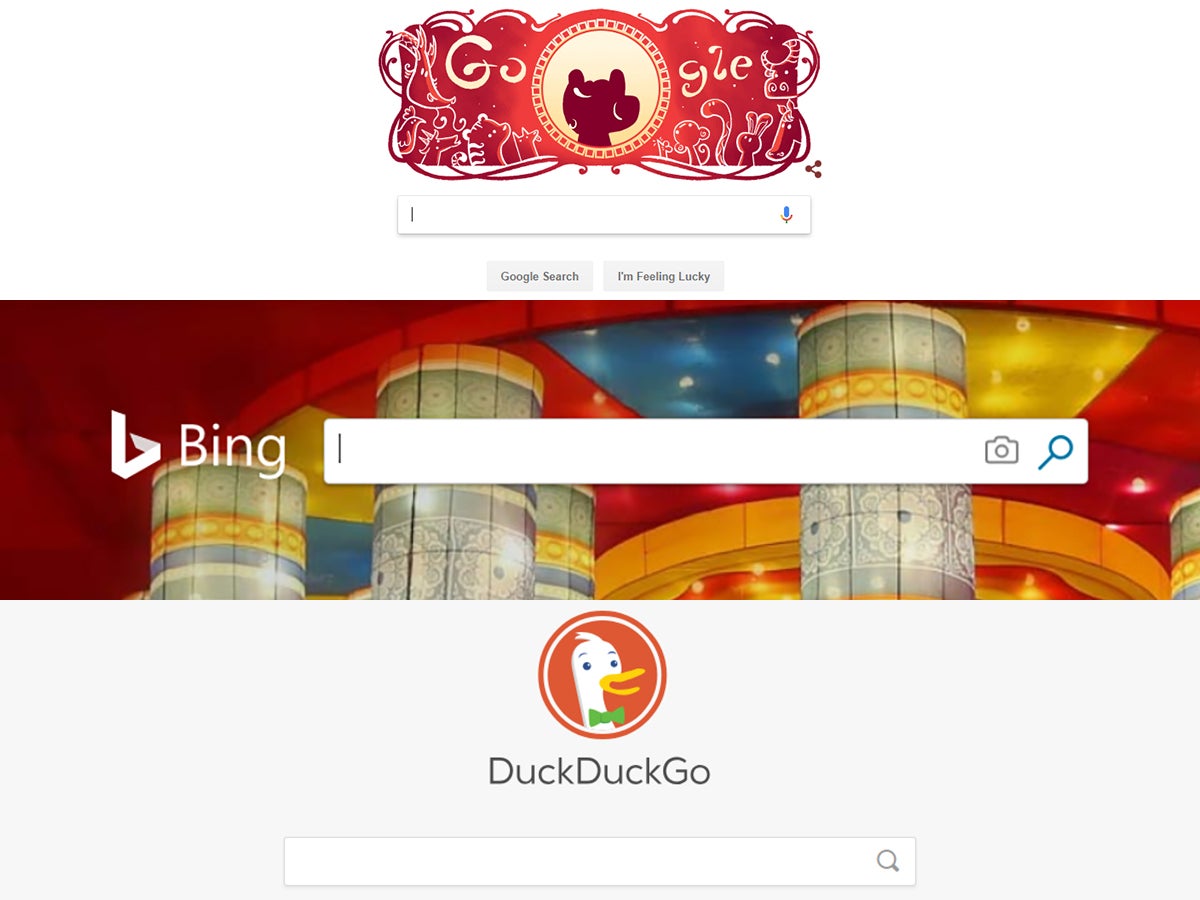 This post has been updated. It was originally posted on February 15, 2019.

Is your search engine of choice pulling its weight? It’s perhaps a choice you’ve stopped thinking about, settling for whatever default option appears in your browser or on your phone—but as with most tech choices, you’ve got options.

[Related: 9 Google alternatives to test out]

Google has come to dominate search to the extent that it’s become a verb in itself, but here we’re going to check how Google search stacks up against two of its biggest rivals including Microsoft’s Bing and the privacy-focused site known as DuckDuckGo.

We don’t know what you’re searching for, and without running thousands of searches across several months we can’t really present you with a comprehensive comparison of how well these search engines scour the web. What we can do is tell you how these services performed on a few sample searches.

First we tried “Abraham Lincoln”: All three search engines returned the Wikipedia page first, the History Channel site second, and Britannica third. DuckDuckGo listed Abraham Lincoln news above the search results, even though the 16th President of the United States hasn’t really been in the news lately.

As we wrote this article a few days after the 2019 Super Bowl, we tried “Super Bowl score” next, and all three search engines produced the right result in a box out above the search results. DuckDuckGo followed this with the official NFL site then some sports news sites, while Bing had a sports news site first and the NFL second. Google listed the score, then Super Bowl news, then some relevant tweets, and then other results.

Next we tried a question, specifically “how many days until Christmas?”, to see how our search engines fared. Only Google presented the right answer front and center as part of its own interface, with DuckDuckGo and Bing returning links to Christmas countdown sites instead (though Bing did put “Wednesday December 25” right at the top).

These are slight differences really, and the “best” one really depends on your personal preference (do you want to see Twitter results, or not?). All three sites are obviously very competent with basic searches, but Google obviously has the edge when it comes to finding content besides web pages, as well as answering questions directly (no doubt thanks to all that Google Assistant technology behind the scenes).

Speaking of Google Assistant, one of the advantages of Google is of course the way it ties into all the other Google apps and services: You can search for places on Google Maps, or bring up images in Google Photos, or query your Google Calendar, right from the Google homepage (as long as you’re signed in). Try Googling “my trips” for example to see bookings stored in your Gmail account.

All three of these search engines feature filters for images, videos, news, and products; Bing and Google include a Maps option as well. You can dig in further on all three sites as well—filtering images by size or by color, for example. Google and Bing let you save searches to come back to later, whereas DuckDuckGo doesn’t (see the separate section on privacy below).

Besides from basic searches, Google and DuckDuckGo do very well on extras: Unlike Bing, they can toss a coin, roll a die, or start a timer right there on the results screen, no more clicking required. Meanwhile, both Google and Bing can display details of a flight in a pop-up box outside the search results, whereas DuckDuckGo directs you to flight-tracking websites instead.

All three of our search engines can limit results to pages that have been published recently, but Google and Bing have a “custom date” search option (say 1980-1990, for example) that isn’t available on DuckDuckGo. Google and Bing let you search by region too, whereas DuckDuckGo doesn’t.

Appearance may not be number one in your list of priorities, but Bing presents its search box on top of an appealing full-screen wallpaper image, with links to news stories and other interesting articles underneath. It’s more appealing visually than Google or DuckDuckGo, though Google has its doodles and DuckDuckGo has a few different color schemes to pick from.

As you can see, Google can do just about everything—it has been in the search engine game for a long time, after all. Bing and DuckDuckGo are able to match Google on some features, but not all, which makes it hard to switch from unless you have a specific reason to… and that brings us neatly on to the issue of user privacy.

This is the big feature that DuckDuckGo sells itself on: As we’ve noted above, it doesn’t log what you’re searching for, and only puts up occasional advertising, which isn’t personalized and can be disabled. If you’re tired of the big tech firms hoovering up data on you, DuckDuckGo will appeal.

What’s more, the sites you visit don’t know the search terms you used to find them—something they can otherwise do by piecing together different clues from your browsing behavior and the data that your computer broadcasts publicly. DuckDuckGo also attaches to encrypted versions of site by default.

Cookies aren’t saved by DuckDuckGo either, those little files that sit locally on your computer and tell websites when you’ve visited before. Data like your IP address (your router’s address on the web) and the browser you’re using gets wiped by default too. You’re effectively searching anonymously.

There’s no doubt that both Google and Microsoft promise to protect your privacy and use the data they have on you responsibly—you can read their respective privacy policies here and here. However, it’s also true that they collect much more data on you and what you’re doing, so it’s up to you whether you trust Google and Microsoft to use it wisely.

Google knowing a lot about you does have its advantages—it’ll know when you search for “dolphins” whether you want the NFL team or the aquatic mammals, for example—so it’s up to you where you draw the line and accept the privacy trade-off. Bing and Microsoft are more or less the same in terms of data collection, though Microsoft doesn’t have the sheer range of apps and services that Google does.

The Google service is also the most likely to save you an extra click through to another website. If you want to know the lyrics to a song, for instance, they will appear above Google’s search results in most cases, where as Bing and DuckDuckGo will make you click through.

Maybe you’re happy enough to have this data collected and to see a few adverts related to what you’ve just been searching for in return for all the extra bells and whistles that Google offers, or maybe you’re much more interested in locking down how much other firms know about you as you travel the web. Whatever your requirements though, there’s a search engine to match.