The alloy can even take a humanoid form 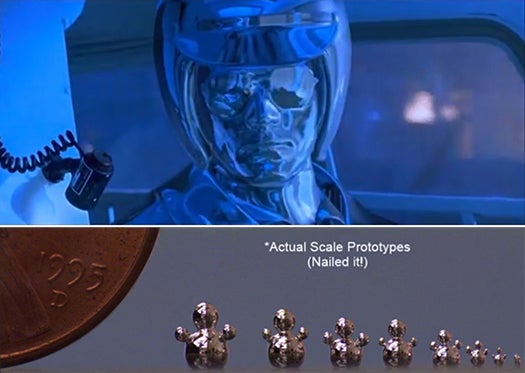 A team of researchers report that they understand a property of a liquid metal that allows them to manipulate it like the T-1000 from Terminator 2 and even build “scale models” of the violent automaton.

Chemists at North Carolina State University have observed that when they apply an electric charge to a gallium alloy (which is naturally liquid at room temperature) in water, they are able to manipulate its shape. After three years of studying the unusual reaction they figured out how it works: an oxide coating on the surface forms when the voltage is applied, then disappears without a trace when the voltage is removed. This coating changes the surface tension of the metal where it meets the water.

“Scientifically this is one of the most exciting projects I’ve ever worked on because nothing in the literature explained it,” Dr. Michael Dickey, an investigator on the study, tells Popular Science.

Dr. Dickey says modifying the shape of liquid metals could have broad practical applications. Circuits could transform in real time to do different tasks. Mirrors in cameras and telescopes could change shape to refine focus. And, in the long run, similar techniques might be discovered in other materials.

The gallium alloy’s oxide surface is too strong in air to allow for the same effect out of water, but researcher believe a similar effect might be produced in other materials under different conditions.

Don’t expect a T-1000 marching (or slithering or galloping) down your block any time soon though. In the gallium alloy this effect is only possible on very small scales. Once too much mass gets involved, says Dr. Dickey, “gravity takes over” and the whole system collapses.

You can watch a video of the process below: