The coolest and weirdest new gadgets from CES 2023 Day 3

Get a look at a totally wireless TV, a super-fast electric motorcycle, a streaming record player, and more from Vegas. 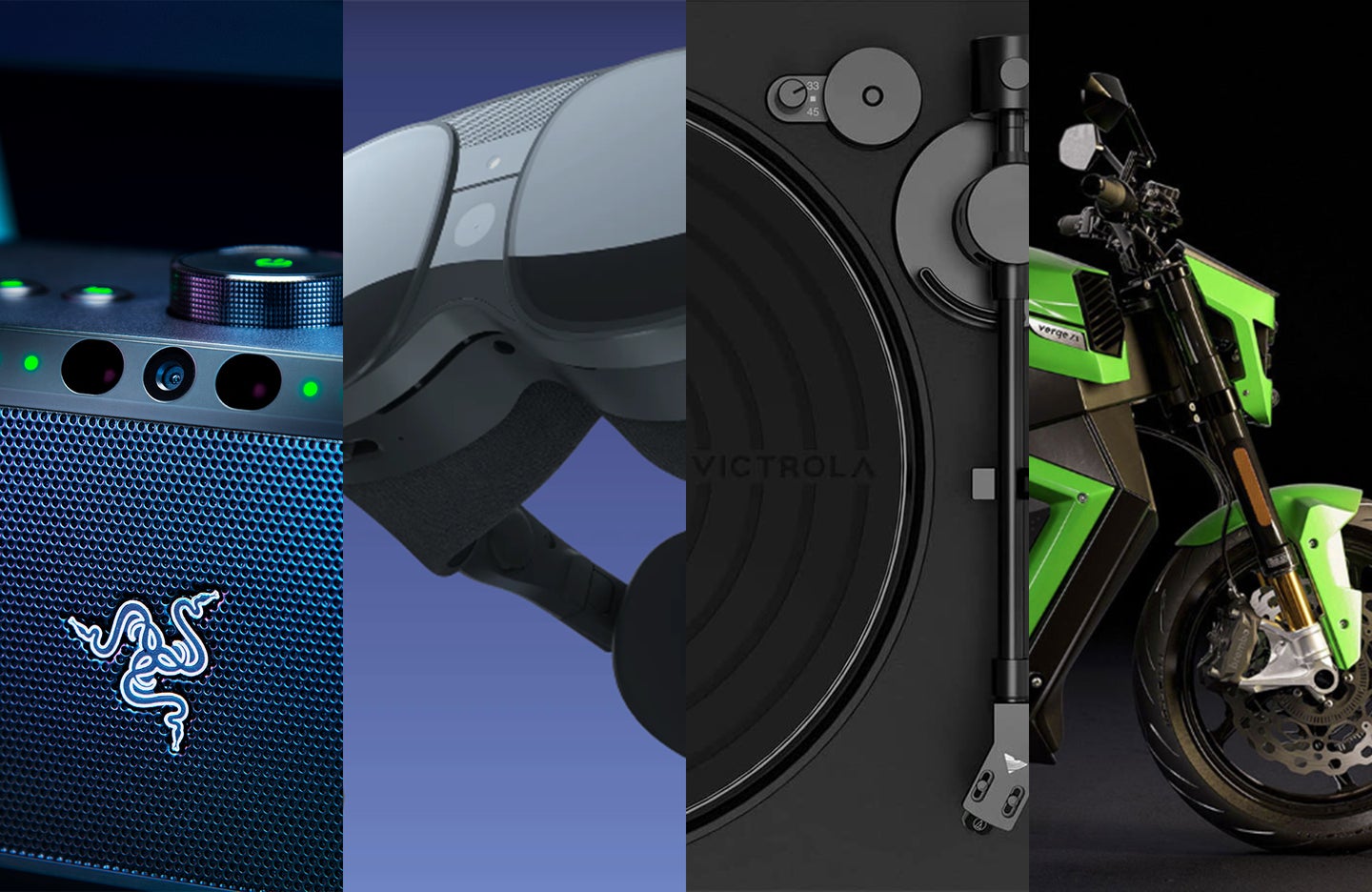 Are you tired of new gadgets and fancy future tech yet? We didn’t think so. The 2023 Consumer Electronics show is humming along in Las Vegas, and we have already seen some very interesting new developments on day one and day two. The show is starting to wind down now, but there will surely be lots of cool new stuff trickling out in the coming months. We’ve made a list a mile long of new products we’re looking forward to checking out and reviewing.

Today’s products include everything from a robotic pet to a super-fast electric motorcycle with a unique new type of motor. CES truly is a wonderful grab bag of cool new tech, and we’re suckers for all of it.

Examine LG’s super-skinny 97-inch OLED TV and you won’t find any ports. Instead, the M3 keeps all of its HDMI and audio connectivity ports in an external box that can sit away from the TV and send a 120Hz 4K wireless signal to the TV itself. As a result, the TV can go just about anywhere without you having to worry about where its set-top boxes and speaker wires will end up.

LG has done some really cool stuff with OLEDs in the past, including the rolling TV that was the start of two consecutive CES gatherings a while back. But this development actually seems rather practical. Well, practical in the sense that it’ll make the second living room on your superyacht look a little less cluttered because this thing is going to be extremely expensive if it comes to market.

Last year, Meta introduced its $1,500 Quest Pro headset, which relies on integrated cameras to mix images from the real world with digital objects on the displays in front of your eyeballs. It’s a cool device, but it’s also $1,500. At CES, however, HTC announced its upcoming Vive XR Elite mixed reality headset, which offers a similar suite of features for roughly $400 less ($1,099).

The Vive XR Elite has a pair of full-color cameras on the front that bring in real-world objects but also track a user’s hands for a more immersive MR experience. Despite the fancy features and powerful computing gear onboard, the headset is relatively compact and looks considerably less dorky than most of its competition. It’s still kinda dorky, but the bar is relatively low here.

Every year, adorable animal-like robots roam around the halls of CES. They’re mostly cute and a little creepy. The Loona Pet Bot fills all those roles. Originally launched on Kickstarter, this dog-like robot tries to replicate the experience of owning an actual pet. It will follow you around the house, play games with you, and convey emotion with sounds and expressions. It even runs to the door when you get home. This isn’t an entirely new concept—Sony’s aibo has been around forever—but this looks like an adorable and relatively advanced version. Plus, it won’t eventually get some terrible disease and soak up two months’ rent money at the emergency vet like all real pets seem to.

Just about everything gets AI-powered upgrades at CES, and baby strollers are no exception. This $3,300 (!) carriage leverages AI for various clever features. Its built-in battery helps assist with both pushing and braking, so it’s easier to go up hills or keep things under control when loaded with a baby, diaper bag, and other objects.

Take the little one out of the stroller and the Ella AI can actually move along with you sans pushing. That is handy if the kid wants to walk and you have to hold their hand. The AI can also automatically rock the stroller back and forth to try and put the child to sleep without giving you an arm workout.

Last year, Victrola announced its Stream Carbon turntable. It simplified the process of playing records through Sonos-connected wireless speakers. Its $799 price tag, however, was a little steep. At CES 2023, Victrola announced the new Stream Onyx turntable, which still works with Sonos, but drops the price to $599.

The differences between the two seem to lie mostly in the materials. The more expensive Carbon model has a carbon fiber (hence the name) tonearm compared to the Onyx’s aluminum, for instance. Still, they’re both slick-looking equipment with sparse controls and relatively low profiles. The Onyx’s price point makes it considerably more tempting to me (and it’s available to preorder now) than the $799 model.

Electric motorcycles are no strangers to speed, but the Verge TS is a full-fledged battery-powered superbike. It employs an extremely clever design that houses the motor in the back wheel of the bike. It creates a hollow, hubless rear rim, which looks unique and also allows it to accelerate at absurd rates. All three model options top out at 124 mph, but the top-end Ultra package will do 0-60 mph in just 2.5 seconds.

If you’re willing to move slower than those absurd speeds, the bike will get up to 233 miles on a charge. Plus, if you have access to a fast charger, it can juice up in just 25 minutes.

Gadgets with rechargeable batteries have grown ever-more power hungry over the years, and Satechi’s newly announced 200W USB-C Gan Charger is designed to keep them well “fed.” The six-port charging station includes four USB-C PD 3.1 and four USB-C PD 3.0 ports, and can charge a single device at up to 140 watts—that’s more than enough to fast-charge a laptop at its maximum speed. If devices are plugged into all six ports, the charger will distribute between 20 and 65 watts of power to each. Multi-port chargers aren’t new, but we haven’t seen one this powerful before. Surprisingly, you can already preorder this tech accessory on Satechi’s site for $149.99 before its release this spring.

It can be easy to forget about e-bikes with so much attention being paid to advancements in electric vehicles, but Cake’s Åik immediately caught our attention. The capabilities of Cake’s e-bike make it more like a paired-down electric car than a souped-up bicycle. Its design is utilitarian, with storage sections above the front and rear wheel and a maximum weight capacity of 441 pounds. The Åik’s standout feature is its impressive range, with Cake saying it can run for up to 224 miles if you choose the optional three-battery configuration. This means the Åik can actually get you farther than many electric cars, although factors like speed and total weight will play a part in that. Cake says the Åik will be available in May this year, starting at $6,470.

Razer’s made a name by continuously releasing gaming computers and accessories on the cutting edge, and the Razer Leviathan V2 Pro is no different. The latest version of its computer soundbar brings compact surround sound to your desktop gaming setup and uses a built-in IR camera to track the movement of your head. It then adjusts the directional cues of its sound to ensure it always hits your ears at the right angle. This updated beamforming soundbar is also upgraded with support for THX Spatial Audio, which uses its five drivers plus additional hardware and software to create either a virtual headset or virtual surround sound speakers. You can hook the Leviathan V2 to a computer using a USB port, but it also supports Bluetooth and use with headsets featuring a 3.5mm headphone jack. Razer has opened up preorders of the Leviathan V2 Pro on its website. The soundbar will begin shipping at the end of January and costs $399.99.

Have you ever noticed how easy it is to lose all the accessories you’ve accrued to help you not lose your phone? OtterBox noticed, which is why the accomplished iPhone protection specialists found a way to fuse what amounts to an ever-present PopSocket into a MagSafe case. Instead of attaching a grip externally to your case (and potentially dislodging and dropping it, not to mention dealing with the unavoidable bump), the OtterGrip is built in and presses flat when not in use. This avoids pocket snags and allows you to attach your iPhone to all the standard MagSafe mounts, battery packs, etc., without detaching anything. More secure, more convenient interaction with your phone—it’s the best of both worlds as you travel through the world.

It’s never too soon to have a conversation about hearing protection. But, for some folks, it might be a little too late to avoid some hearing loss. Whether because of lifestyle or age, you might have hit a point where it’s harder to follow what someone else is saying in a noisy environment. That’s why Sennheiser—a company known for capturing and conveying the richly expressive clarity of audio—has introduced OTC listening-assistant true wireless earbuds. Packed with intuitive features like Automatic Scene Detection, the Conversation Clear Plus can analyze the noise level and match the speech enhancement level to the surroundings. You can also toggle between active noise cancellation and ambient modes, depending on whether you want more or less of the background present. And, yes, you can use them as standard Bluetooth 4.2 earbuds—complete with a 9-hour battery life (27 more from the charging case)—if you want to listen to streaming content from a smartphone, laptop, TV, etc. The Conversation Clear Plus hearing solution is available to preorder now for $849 and will ship Jan. 20.