N97 bests the smartphone competition in many features 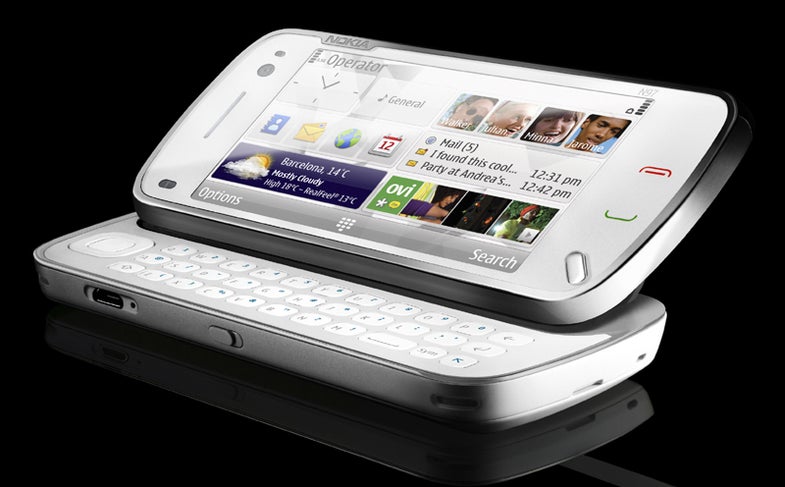 Nokia jumped into the crowding, iPhone-inspired geniusphone market today with the N97, which they gave the New York press a peek at last night. The 3G phone sports a full-body touchscreen (alas, resistive, not multi-touch capacitive) that when in landscape mode slides up, Sony Xperia-style, to expose a full QWERTY keyboard. (It offers virtual keypads and keyboards on the touchscreen, too.)

The phone’s distinguishing feature is a customizable home screen. As on Apple OSX or Windows Vista, for example, the N97 supports “widgets” small programs or links to programs that provide snippets of information, such as weather forecasts or the latest Facebook updates. Users can select the widgets that appear on the home screen and drag and drop to organize as they like. I slid them around with ease on a prototype last night. Though no iPhone screen, the resistive LCD does pickup finger input pretty well and supports a few cool gestures like “flicking” side to side to scroll through photos or up and down to move through a list of songs in the music player app.

While the rest of the N97’s features may not be industry firsts, Nokia ups the ante in specs. The iPhone, for example, tops out at 16 gigabytes of built-in memory. The N97 comes with 32 gigabytes and a slot to add even more (up to an extra 16GB, given the capacity of current MicroSD cards). At 640 by 360 pixels, the 3.5-inch LCD has 1.5 times the detail of the iPhone or G1 (and a bit more than the Blackberry Storm). And it’s browser supports flash, allowing it to display video from sites like Hulu as well as many other modern Web sites that show up blank on other Web-browsing phones. The camera captures five-megapixel stills and DVD-res video (640 by 480 pixels).

The phone orients itself not only with assisted GPS but also with a compass that automatically turns maps to the right direction (a feature Nokia first introduced on another phone earlier this year). It also updates user’s coordinates to share with friends (a concept we first saw on the Helio Ocean about two years ago).Nokia calls this data “social location,” or “So-Lo,” if you’re really hip. And based on the Utopian video of connectedness they showed to the press last night, it seems to be just the beginning of more-advanced location-based services to come.

Speaking of navigation, Nokia also rolled out Maps 3.0, which includes topo maps and 3-D maps featuring famous landmarks for 200 cities. Using Nokia’s Ovi Internet service, users can plan out trips on a PC that are automatically synched to their phones. They can also save and share routes they have taken with other users.

All these goodies don’t come cheap. The N97 will sell for around 550 Euro (about $700) on its own. It will be less with a carrier subsidy, but Nokia isn’t saying yet if AT&T or T-Mobile will carry it (as a GSM phone, those are the two options for it in the US). Nor will Nokia even confirm that the phone will operate on US 3G networks, but that’s a safe bet. Though it does have 802.11g Wi-Fi, without an always-available broadband connection, the extremely Internet-focused N97 would feel as useful as a brick.