A showdown of smaller “big” cameras from Canon, Olympus, and Panasonic 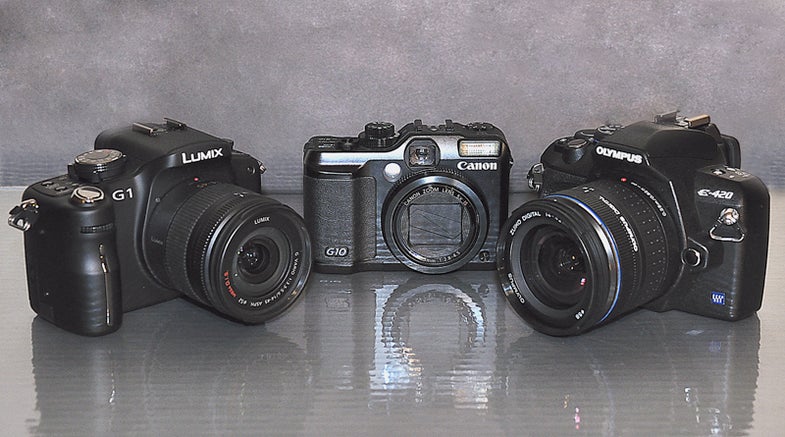 Size is an issue with cameras. I miss a lot of good shots when I don’t feel like lugging around a hefty SLR (such as my current fav, the Nikon D90). And while my pocket camera (presently a Canon SD800) is easy to tote, the image quality is more for “snapshots” than “photographs.”

I, and a few other shutterbugs around the Popular Science office, have been looking into the middle category of cameras: big enough to take good pictures, but not so big that it’s a burden. Now is a good time to look, since several camera makers have fresh midsize camera offerings.

Recently introduced, the Canon G10 ($450) is the latest in its long-running series of “serious” point-and-shoots. At the heart of the camera is a tiny (about 40 square millimeters) image sensor similar to what you get in a pocket model. But it’s paired with a large, relatively bright (f/2.8-f/4.5 aperture) lens and sophisticated manual controls, all wrapped in a tough magnesium-alloy body.

Panasonic approaches from the other extreme. Instead of beefing up a point-and-shoot, it slims down an SLR. The ** Panasonic G1** ($800) is the first camera using a new format, perplexingly named “Micro Four-Thirds” (don’t ask), that provides the same large image sensor (225 square millimeters) and interchangeable lenses of an SLR but saves space by taking out the mirrors that allow you to see “through the lens” when you look into the viewfinder. The format has the potential to produce really tiny SLR-like cameras, but the G1 is just about the size of my third pick, an actual SLR (albeit the smallest ever), the Olympus E-420 ($500) which debuted last spring.

I took all three cameras out for both casual shoots around town and formal side-by-side tests. I had expected one to emerge as a clear winner. But it wasn’t that simple. Each has weaknesses that are either inconsequential or deal breakers, depending on how you intend to shoot.

Of the three, this is the only camera you can put in a pocket—not the pocket of a polo shirt or a pair of hip-huggers, but at least of a coat or baggy jeans. It would also squeeze into a tiny handbag, though at 12 ounces, it adds a lot of weight.

The layout is superb. The right-hand grip slips into your fingers as if they had evolved for that purpose. Metal knobs on top let you quickly dial in the camera mode (automatic, manual, aperture priority, etc), the ISO light sensitivity and exposure compensation (to make photos a little brighter or darker than the camera’s brain normally would). A three-inch rear LCD displays the unbeatable L-shaped menu from Canon’s point and shoots. You scroll up down for categories such as white balance and image quality, then side-to-side to chose the setting, such as “daylight” or “cloudy” white balance and different levels of JPEG quality (or the option to shoot “RAW” and process the photos by hand on your computer).

If you want to trick out the camera, it has a hot shoe for mounting any of Canon’s SLR-grade flash units plus a mount around the built-in 5X zoom lens for adding attachments such as a telephoto lens. It’s also the only one of these three cameras that comes with an image-stabilizing lens and also the only that captures (standard-definition) video.

Images under bright light were brilliant. The G10 was the best at capturing difficult exposures—such as a building that was partly in bright sunlight and partly in shadow. The iContrast mode in its Digic 4 image processor ensured that no part of the photo was too dark or too light. It was close to the Olympus E-420 for overall color quality (the main weaknesses were in its slightly orangey reds and cyan-tinted blues).

Colors were also brilliant for indoor test photos of household objects when we used the built-in flash. Without flash, though, the G10’s tiny image sensor just can’t capture enough light. It’s ironic that the camera’s biggest control is the ISO dial that goes up to 1600. Canon could have saved space with a knob that stops at 400, the point beyond which photos become intolerably grainy.

The G1 offers the best options for framing photos. Its three-inch LCD tilts and swivels so that you can eyeball shots while holding the camera way over your head or down by your knees. You can even spin it around to line up a self-portrait. There’s no mirror to provide a periscope-like view through the lens. But Panasonic provides an electric viewfinder (EVF); basically a little LCD that you put your eye up to. The low resolution and color quality are disappointing, but the EVF provides one great advantage: It’s extremely bright even when you are shooting in a dark room. I found it invaluable when shooting with flash in a dark New York City club. The flash would provide enough light once I pressed the shutter, but I wouldn’t have been able to see what I was intending to photograph without the ultra-bright EVF. (Check these photos from a “fashion show” hosted by Fujifilm in which design school students made dresses on live models by cutting up and gluing together photographs.)

And those indoor shots were brilliant. The G1’s SLR-size sensor captured accurate colors with very little pixel noise up to ISO 800. And its built-in flash was excellent. (Like the G10 and the Olympus E-420, the Panasonic camera has a hot shoe for adding high-power flash units.)

Given all this, then, it was disappointing how poor the G1’s outdoor shots were. Blue skies came out slightly purplish. Details such as bricks on buildings or tree branches appeared slightly blurred, and some photos were a bit overexposed.

Also, the camera stinks—not figuratively, but literally. The soft matte-black plastic emits a funky “chemical” smell as if it hasn’t been fully cooked. It’s a slight odor that you might not notice on, say, and MP3 player. But when you’re constantly holding a camera up to your face, it’s mildly annoying. I noticed this, by the way, on TWO different samples I got from Panasonic. They were both black, however. I don’t know if the red or blue color options would smell any different, though I suspect they are not cherry and blueberry scented.

Whenever I see this camera, I grin and am compelled to hold it. This is a real SLR, but it’s so tiny and cute. The body is about half the size of, say, the Nikon D90—itself a pretty compact SLR. The E-420 is the one camera here to provide that cherished ability to peer into the viewfinder and see exactly what the lens is spying. Unfortunately you get a rather constrained view that feels a bit like looking through a peephole. You have to give up something to get an SLR this small. You can also frame photos on the 2.7-inch LCD—as this camera (as well as the Panasonic G1) has a live view option.

A few knobs and buttons on top provide quick access to some basic settings, such as scene mode, flash adjustments and exposure compensation. But as with the Panasonic, most controls are via the LCD. Pressing the “OK” button on the back of the camera brings up a series of icons on the screen. You navigate among them using the directional arrows and then select one with the OK button to make adjustments. Olympus and Panasonic have long collaborated on SLRs, so it’s not surprising that they have roughly the same interface.

Being a true SLR, it’s not surprising that the E-420 was the most reliable picture-taker. It performed slightly better than the Canon outdoors, mainly due to its color quality, and it showed the lowest amount of pixel noise for indoor shots at high ISO, delivering serviceable shots up to ISO 1600. The Panasonic G1 beat it on color indoors, but not by much.

The E-420 would be a natural choice if you already own a larger Olympus camera, such as the E-3 or the new E-30. It’s essentially a mini-me of these cameras that has similar controls, shoots the same file format, and takes the same lenses. The Panasonic, in contrast, introduces a new lens format for which there are currently only two models, the 14mm to 45mm (equivalent to 28mm to 90mm on a film camera) that I tested it with and 45mm-200mm telephoto. (Lenses from larger Panasonic SLRs can be attached via an adapter, but that kills the point of making the camera assembly smaller.) The Olympus E-420 comes with a similar 14mm to 45mm lens but also works with any of the company’s other 21 digital-SLR lenses.

The best overall camera for image quality was (drumroll please), unsurprisingly, the Olympus E-420. The others varied wildly. Canon’s G10 aced bright outdoor settings and also produced stunning nighttime photographs using its built-in flash. But with low light and no flash, it was virtually useless. The Panasonic G1’s color and exposure were skewed under daylight, but low-light images with high ISO (sensitivity) settings looked surprisingly good—both with and without flash. Please launch the gallery here to see a series of comparison shots from all three cameras.

Nevertheless, image quality is hardly the only factor you’re going to be dealing with. For a lighter-weight SLR, the Olympus E-420 is a great choice. But while it’s a lot smaller than most SLRs, it still won’t squeeze into any pocket. For that level of portability, the Canon G10 is the way to go. Panasonic’s micro four-thirds format (for which, by the way, Olympus also plans to make cameras) would have promised the ideal camera: The soul of an SLR in the body of a point-and-shoot. But the G1 is too bulky, too SLR-like for that. In other words, there’s no clear winner; the best I can advise is that you figure out what features you’re willing to tradeoff for and work it out from there. That, or hold out for Olympus’s take on the micro four-thirds format. 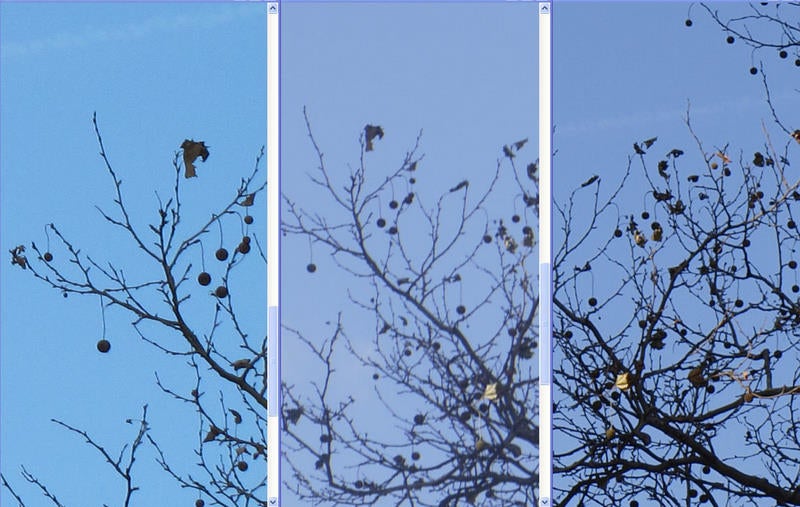 Sky’s Are a Changin’

In this view of tree branches against the sky, the Canon (at far left) captured good detail but made the sky appear too cyan. The Panasonic G1 (middle) adds a purplish tint. But the Olympus E-420 gets both color and detail right. 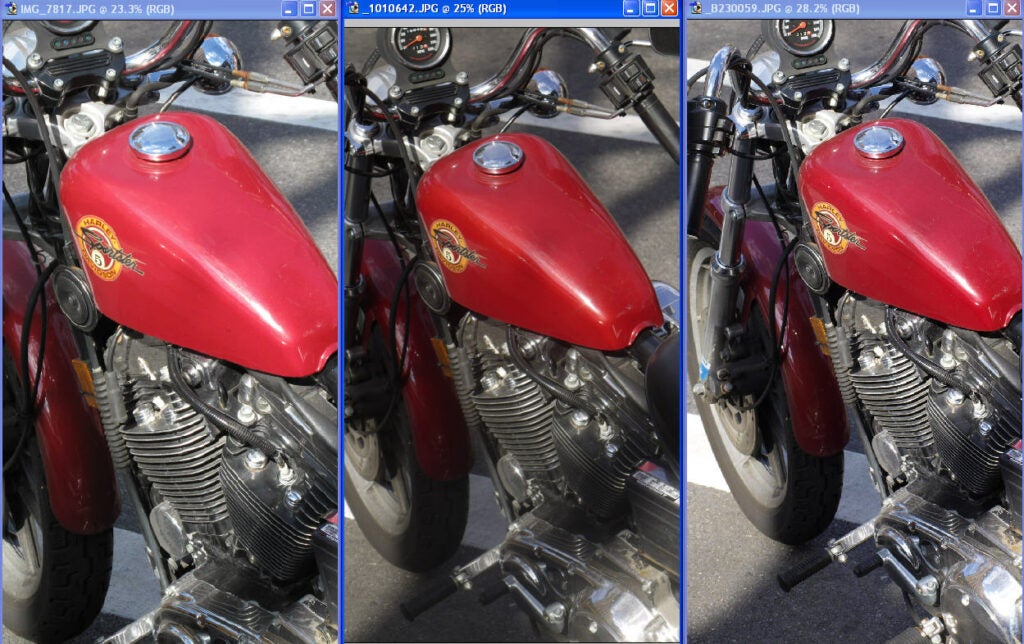 The Olympus photo, at far right best captures the color of the motorcycle’s red gas tank and the detail in the chrome work. The Panasonic image (center) is a bit too orange), and the Canon’s (far left) is too faded. (Size of images varies due to different resolutions of the cameras.) 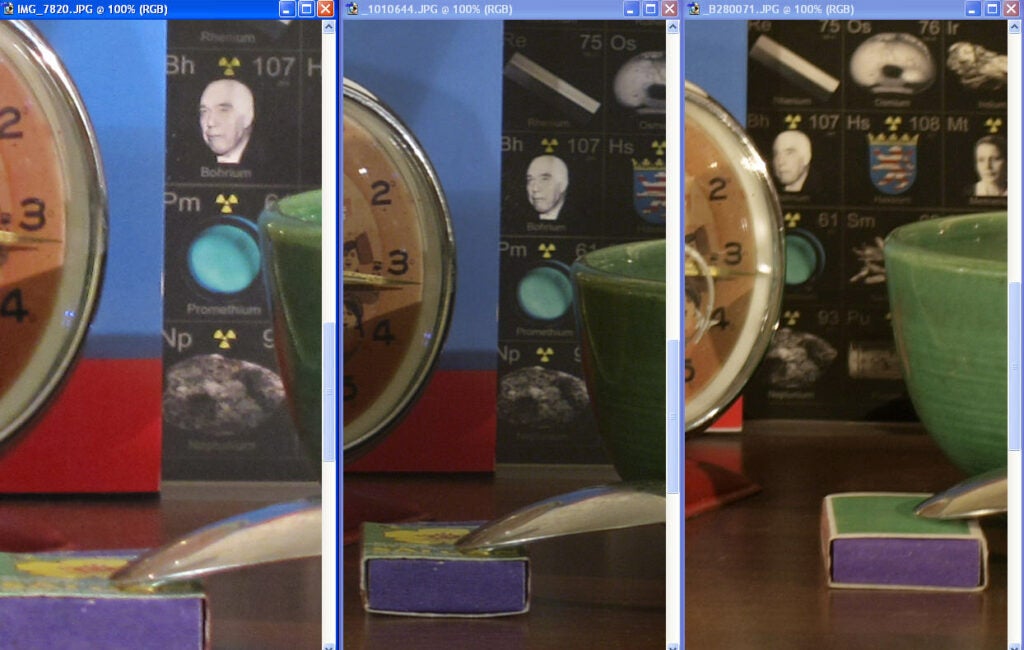 In this detail of an indoor still life shot at ISO 100, the Canon (far left) us already showing a bit of graininess but still excellent color. The Panasonic image (middle) is the clearest, but the Olympus image has the least amount of pixel noise. 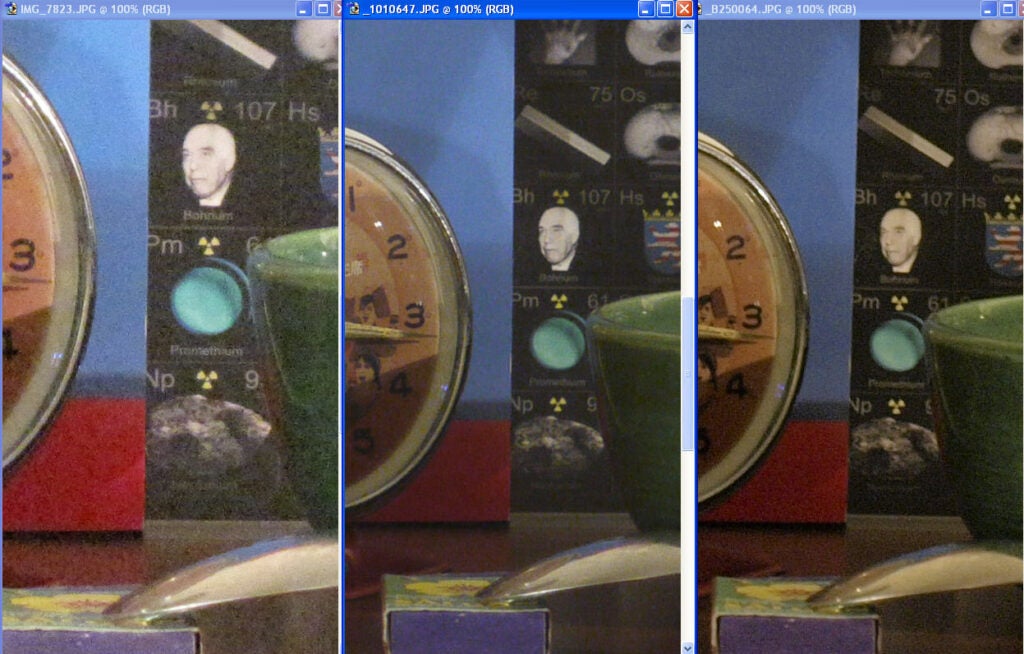 Getting grainy At ISO 800, the Canon image (far left) is already covered in a haze of pixel noise. The Panasonic (middle) and Olympus (right) are holding up fairly well. 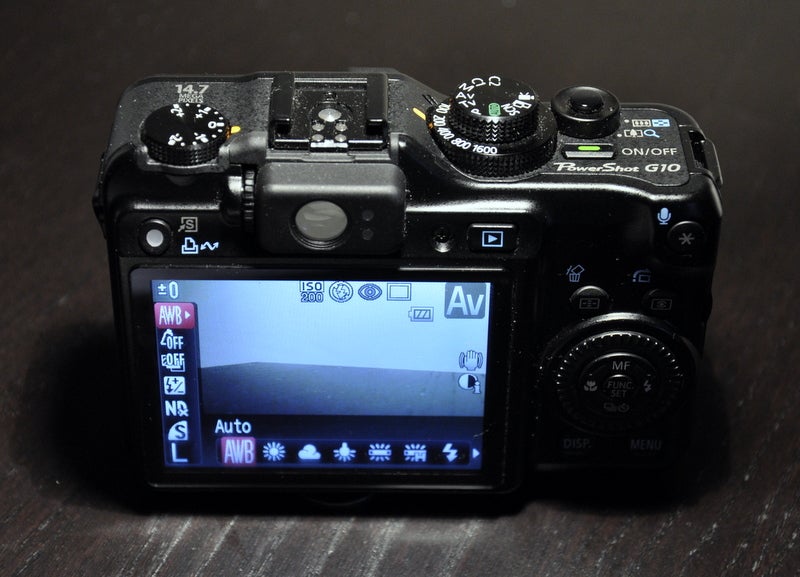 Manual knobs and a straight-forward LCD interface on the Canon G10. 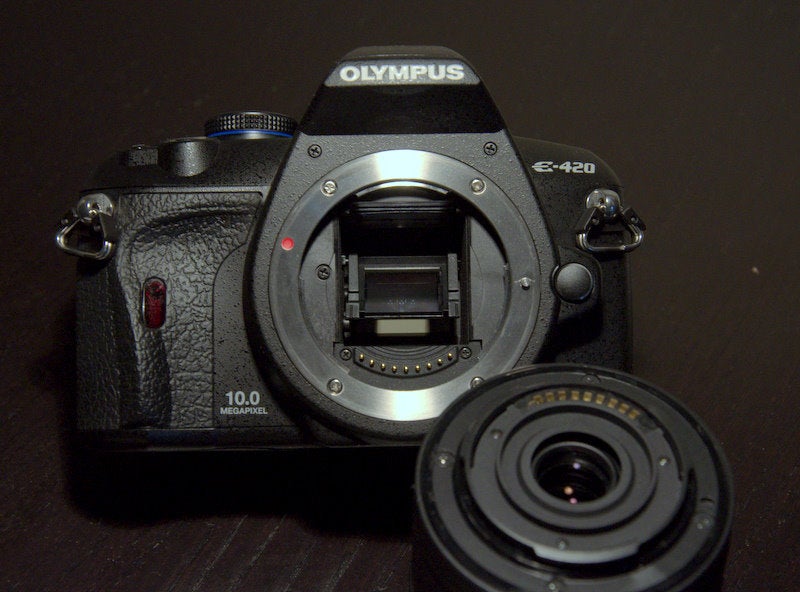 The interchangeable lens mount and ultra-compact mirror assembly of the Olympus E-420, the one SLR we tested.
cameras
canon
dslrs
Gadgets
Olympus