Google Nexus 4 Review: The Phone You Should Buy This Black Friday

It's probably the best smartphone on the market, period. 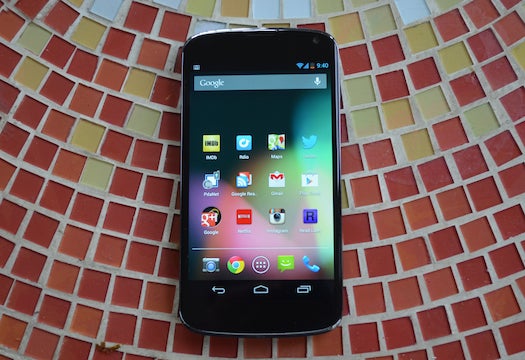 Available contract-free! For $300! Assuming Google ever gets more in stock, that is. Dan Nosowitz
SHARE

The Nexus 4 is the first Android phone that combines all the disparate parts of a phone–interface, options, ease of use, speed and smoothness, depth of features, quality and number of apps–in the right way. It is the best Android phone I’ve ever used, sure, but it’s the only Android phone I’ve ever used that feels as intentional as the iPhone. It feels like it was put together with a vision of how this phone should work as a whole–not just “add this feature, add this feature.” It’s probably the best smartphone on the market, period.

It’s the newest Nexus phone. The Nexus line is the ideal of Android–it’s what Google wants Android to look like, without the skins and app bundles and rearranged buttons and all kinds of garbage that, left to their own devices, Samsung and HTC and Motorola and LG just can’t stay away from. This particular Nexus is made by LG, a riff on the older Optimus G, with a 4.7-inch screen, a very fast quad-core processor, 2GB of RAM, NFC (read more about that here and here), and wireless charging. It also has the newest version of Android, 4.2, which is mostly a refinement in terms of feel rather than a full overhaul. (This is mostly obvious in the smoothness of the OS, the speed, and lots of little touches.) But the camera has been re-done, and Google Now (this year’s Innovation of the Year in our Best of What’s New package) has some new features.

Well, pretty much everything. But most important, I think, is that everything works in concert, and that everything feels right, and that’s largely due to the smoothness of the operating system on this obscenely powerful hardware. The Nexus 4 is the very first Android tablet that responds to touch as well as an iPhone. It’s kind of crazy it’s taken that long, but it was a little shocking when I first used it–no more lag, no more trouble tracking, no more weird swipes or unexpected virtual friction. It is, at long last, correct. This is a huge step forward for Android. 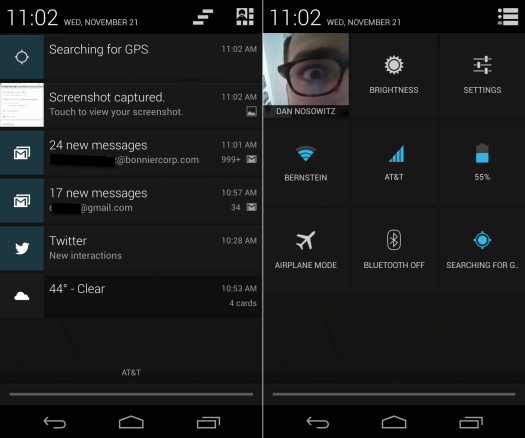 Left: this is what you see when you pull down the notifications shade from the top of the screen–it tells you everything that’s going on with your phone. Swipe individual items to dismiss them, or tap a little box to clear all. Or you can tap an icon in the top right to get the screen on the right: your most frequently used settings.

The key Android features are finally ones that I think most people will use, and that are both exciting and totally unmatched on other platforms. Google Maps on Android is so far ahead of the competition it’s not even fair; this isn’t new, but it bears repeating, because a location app is one of the most important tools on your phone. It has offline caching, public transit, traffic, and bike directions, overlays with information from Wikipedia, turn-by-turn navigation, coupons, and the best search of any maps app (meaning, it hardly ever steers you wrong). It is outrageously good.

Google Now has gotten a little boost as well. I was very excited to name Google Now our Innovation of the Year; it’s gone almost completely under the radar, compared to something like Siri, but, here’s the comparison. Google Now is more innovative, more capable, and more useful–most importantly, the thing actually works. Tap on the search bar to bring up your “cards,” which are little snippets of information tailored specifically to you, what you want to know right now and right here. Right now, mine is telling me the weather, subway closings for the train nearest me, that a thing I bought from Amazon is shipped and in transit to my apartment, and when I need to catch the subway to get to my next appointment. I didn’t ask it to do any of that; it looked through my email to snag the tracking number from Amazon, and found weather for my location. The appointment thing is even crazier: it looked through my calendar for the appointment, routed me based on my current location (using the subway schedule), and learned that I take public transit rather than drive. Complicated! But all I see when I go to Google Now is “hey Dan, you should leave in 12 minutes to catch the C train to get to your appointment on time.” That is amazing.

The app selection is finally up to par; iOS has better games and some apps will always go to iOS first, but there certainly aren’t any major apps available on other platforms that aren’t available here. And Android has always had an excellent selection of stuff for tinkerers–power management tools, alternate browsers and media apps, easy ways to take back your data plan by tethering or totally change the way your phone looks and behaves. But that’s all expert stuff, not stuff for most people, and Android has finally gotten pretty much everything normal people would want. 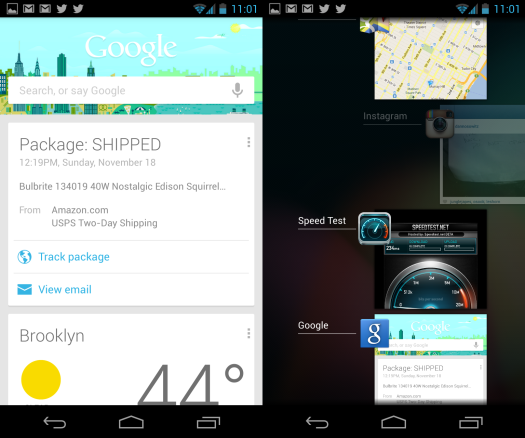 Left: Google Now, the kind of personal assistant service. It looked through my Gmail to figure out I have a package coming, and used my location to tell me the weather. Right: tap the right-hand “soft button” that’s always at the bottom of the screen, next to the Home button and Back button, to see your recently used apps. Here, I’m mid-swipe to close an app. Go away, Instagram!

I love love love the way Android 4.2 helps you get things done. It makes iOS and Windows Phone seem incredibly inefficient. Switching between apps is done by hitting one of the three permanent “soft” buttons on the screen, which presents you with a list of open apps. Tap on them to go there, or swipe it off the page to close. Same thing for the pull-down notification shade–tap to go, swipe to close. It’s such a fast and intuitive way to manage everything that’s going on with your phone, especially compared to iOS’s tricky little notification shade, with its tiny “clear” buttons and no way to clear individual items. Oh, and the power controls are great, too–pull down the shade, tap one button in the upper right, and there’s your key settings (brightness, Wi-Fi, Bluetooth, airplane mode, battery, signal strength, and a link to the full settings). It’s a really fast and clean way to change frequently adjusted settings without going into some dumb settings app.

The camera’s been overhauled, too: the camera on the Nexus 4 I found to be pretty decent in low-light and very bright and colorful and detailed with good light. And the way you control it is new, too–you tap and hold your finger on the screen, and a ring of options (HDR, flash toggle, white balance, ISO) blossoms around your finger. It’s super convenient and smart; I wonder why nobody’s ever thought of it before. The coolest other new feature of the camera is called “Photo Sphere,” which is like a hyper-panorama. You move your phone not just in a straight line in front of you, but above you as well, like you’re moving it along an invisible giant hamster ball. It’s great for showing your parents your new apartment. 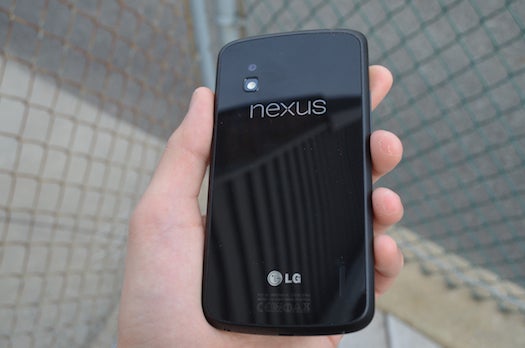 The hardware is not attractive. I don’t mean it’s _un_attractive, I just mean it is not attractive. It is blah. It’s a rounded black rectangle of, mostly, cheap plastic. (It is nicely thin and light, though.) The back is some kind of clear panel that has a slight glitter to it in the right light–it is, thankfully, not gaudy, but I also am not particularly enamored of it. Worse is that it’s kind of slippery.

The Nexus does not have an SD slot. That wouldn’t normally be a big deal, but it’s only available in 8GB and 16GB models, so you might find yourself wanting some extra space.

The screen is really bright and clear and crisp, but only indoors–I found it much too reflective in direct sunlight. I’ve tested worse screens; the Nexus 4 isn’t unreadable outside, but I’d prefer it was less reflective. 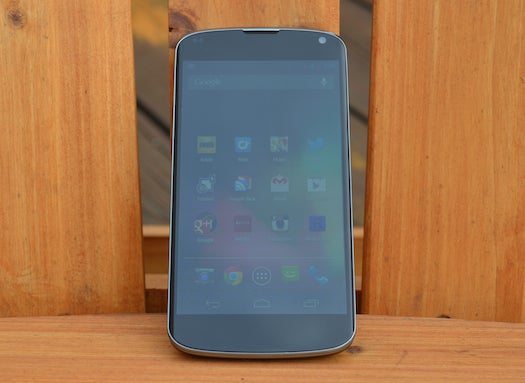 Battery life is only adequate. It’ll make it through a day with light use, at most. Others have been reporting that extensive use of the camera will slaughter battery life, which is too bad, because the camera’s very nice.

And it’s curious that battery life is a problem, because it lacks 4G LTE, which is typically the feature that kills battery life fastest. The Verge said a modern LTE-less phone is like a “muscle car with no wheels,” but I think that’s an overreaction. The Nexus still supports T-Mobile’s very fast HSPA+ network, and it worked fine on 3G with an AT&T SIM card. Like, yes, 4G would be good, and I am not really sure why it was left out, but not one time did I ever find myself demanding a webpage load 0.75 seconds faster. Not a dealbreaker for me, at least.

Here’s something interesting: phones are typically sold subsidized, with a contract. Your $199 iPhone actually costs a whopping $700; you’re just getting a deal because you’ve agreed to pay Verizon, AT&T, or Sprint a few thousand bucks for the next two years. But the Nexus 4 is being sold contract-free: the 8GB model costs $300, and the 16GB costs $350. That’s surprisingly cheap, considering you’re not locked into a contract, though you may not care about being locked into a contract. Or you can grab it for the usual $200 at T-Mobile.

If the Nexus 4 worked on Verizon, I’d probably drop my iPhone and grab it. That’s how good this phone is. Android has never been so put-together, so thoughtful. Many of its best points are completely unmatched on any other platform–the one-two punch of Google Maps and Google Now is unbeatable. The hardware is above average–I like the inclusion of wireless charging and NFC, and it’s a nice size for your pocket (unlike some phones). If you’re in the market for a new phone, and looking for something on T-Mobile or AT&T, this is pretty much the tops.