CES 2013: 4K Is This Year’s Most Amazing Tech, And It’s Completely Impractical

Everyone's freaking out about 4K at this year's CES. Here's what it is, and why you should (and should not) care. 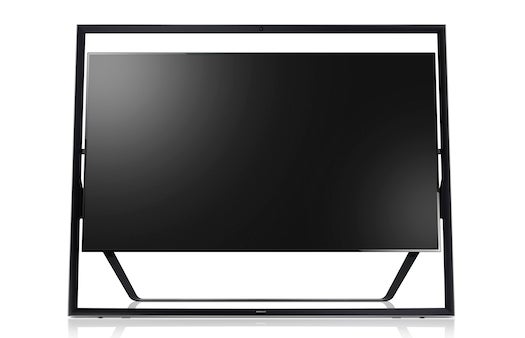 A German guy just came around with a cameraman, asking people in the press room what their favorite thing at CES has been this year. (He did not ask me. I was shooting eye-daggers at him.) Two guys at my table were asked, and both said one of the 4K TVs — Sony’s OLED and Samsung’s curved set. 4K is clearly the buzzword at this year’s CES.

What is it? 4K is a new, higher resolution for screens and projectors, with roughly 4352 x 2176 pixels. It’s about four times as pixel-dense as 1080p. Cool! That means more detail–you can get your greasy face right up next to a screen and it’s still crystal clear. This is a higher resolution even than what’s in most movie theaters.

Why should you care? The pictures look amazing from up close. I tried out both Sony’s OLED and Samsung’s curved 4K sets, plus a 4K 3-D set, plus about a thousand other ones. They all look stunning. These are really great TVs. Another reason to care is that this is the wave of the future: Sony’s starting to produce content in 4K resolution, and it’s one way to get true movie-theater-quality video in your house.

Why should you ignore this? Well, a bunch of reasons. It’s not new technology, exactly, but 4K in the consumer space is very, very early, and that comes with a whole mess of caveats. First: assuming you actually can buy a 4K set, they are ludicrously expensive. And you can’t really buy one, not yet. Several companies have said they’ll come out with 4K sets this year, but we won’t hold our breath. Expect the first generation to cost tens of thousands of dollars.

The other big problems are content and distribution. 4K content is incredibly rare; NHK and the BBC both produce some 4K content, and Sony is making a big push to film sports and movies in 4K, but right now there’s basically nothing out there to watch.

And even if there were a ton of content you’d want to watch, you wouldn’t really be able to. 4K video takes an outrageous amount of storage–we’re talking nearly 10 terabytes for a normal-length movie. So you have to figure out how to store that–there’s certainly no disk that can handle it, since a Blu-ray tops out at about 100GB, or a hundredth of the space you’d need. 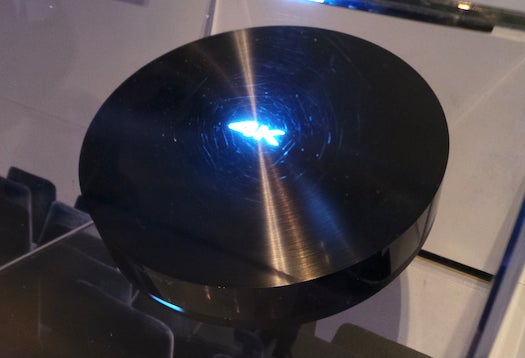 This is just a prototype, but Sony told me the final box might look similar to this. Every 4K TV will come with this box.

The other problem is that America’s internet infrastructure is nowhere near robust enough to handle the demands of 4K. You’d need a 100-megabit/second connection to stream a compressed 4K video, which isn’t an ideal option since you’ll invariably lose some quality in the compression. And basically nobody in the States has a connection that fast anyway; an average Verizon FiOS connection hits about a quarter of that. In South Korea, where they have gigabit connections, 4K would be alright. But not here, not for years.

To deal with that major problem, Sony is providing a big machine you can plug into your new 4K TV, if you’re will.i.am or whoever else buys one this year. It’s basically a computer with a ton of storage, and Sony will package 10 movies and a few shorts onto it. That’s right, you need a huge hunk of machinery and special installation from Sony just to watch 10 movies. The Sony rep I talked to was pretty vague about what happens after you watch those 10 movies. He said the machine could be “updated” with more content, but when I reminded him that it’d take about three days to download a single movie over America’s highest-speed internet connection, he didn’t really have a response.

But this is a showoff tech, not a “here’s what you guys will buy this year” tech. And that’s fine! We like amazing futurey stuff! But let’s keep it in perspective.