One of the Wii U's closest relatives isn't from Nintendo's past. It's a controller accessory with a surprising cult following. 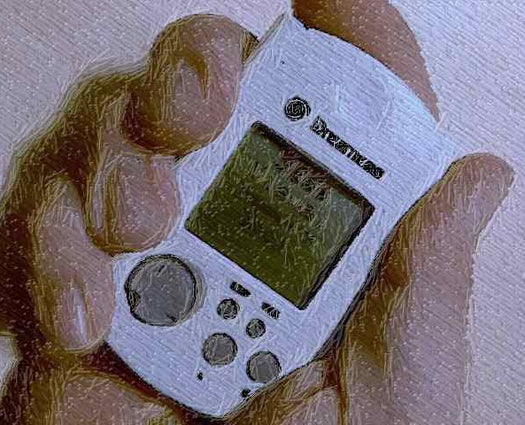 To most of the world, Sega’s Visual Memory Unit has been been dead for the better part of a decade, forgotten as a footnote in the annals of videogame history. It was a memory card, shaped mostly like a Tamagotchi, that slipped into the giant controller of a Sega Dreamcast, with its tiny, 1.5-inch greyscale screen peeking through a little cut-out. If players wanted to, they could pull it out of the controller and, using two buttons and a control pad, play rudimentary mini-games. It was a smallish element of a failed console released 13 years ago from a company that no longer even makes hardware.

But with the release of Nintendo’s Wii U, the internet’s collective memory began bubbling, and the VMU popped up from the depths. There’s a GameFAQs thread entitled, “Is the WiiU controller like an upgraded VMU ?” There are YouTube videos pointing out the connection. Did Nintendo reach back into its past to swipe an idea from a vanquished foe?

The VMU is a not-uncommon topic in certain hobbyist corners of the internet, and the posters are, amazingly, often doing more than talking about the gadget. People make games for the VMU, there are sites for downloading emulations of VMU games, there are recent YouTube reviews with non-negligible hits, and, inexplicably, someone has created a portrait of the gadget done in the oil-painted style of George Washington crossing the Delaware.

There’s a story Dreamcast fans will tell you, even if it’s not the whole story.

Once upon a time, there was a company named Sega. Well, there’s still a company named Sega, but once upon a time, Sega was a burly player in the early videogame wars. The company became important in the home market with the release of the Sega Genesis in 1989. People loved the Sega Genesis! Sega could be the new Nintendo! Then it released the Sega Saturn. People…did not really love the Sega Saturn. Then in 1999 it released the Dreamcast, which was a more complicated thing altogether.

Young friend, Sega was ahead of its time, and so was the Dreamcast. It was the first in the sixth generation of consoles, released a year or more before the Sony PlayStation 2 . In many ways it bested these later, more powerful systems, and at its creative peak was years ahead of Sony and Nintendo. The Dreamcast was the first mainstream console to have a real internet-gaming network, with a built-in modem. Many games for it, like Jet Grind Radio and Crazy Taxi, are classic of their genres. The Dreamcast introduced innovations like downloadable content and that weird little memory card, the VMU.

The public didn’t reward Sega for all that effort, and although it started strong, the Dreamcast would become the company’s last foray into hardware. Sega’s console dreams shattered like a Sonic Adventure disc under a work boot, and innovations like the VMU went along with it. Fin. 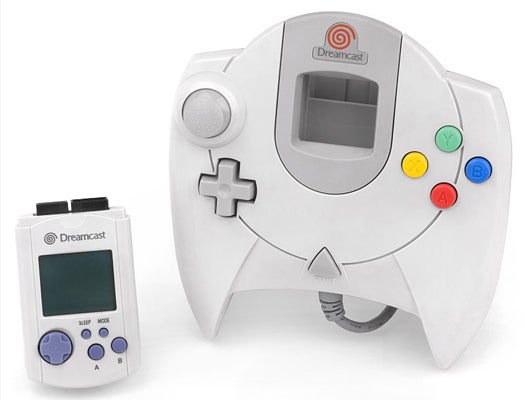 That’s something like what Dan Loosen told me, although it was more tempered than a fan’s account would be. During the day, Loosen is a substitute teacher, but I wanted to pick his brain because of his night job, working at the GOAT Store. GOAT is an online retro gaming market–Amazon for the connoisseur or the especially nostalgic. If you want to find an Atari Jaguar game, you might eventually end up at GOAT. Loosen and his business partner, Gary Heil, cofounded it in 2000, and they also run the Midwest Gaming Classic convention. In 2003 the pair opened up a publishing division to sell new, independent Dreamcast games, including some that were VMU-compatible.

He says the VMU represented Sega at its creative peak–a totally new idea that both stood alone and worked with the console. He remembered a friend who got a VMU well before investing in a Dreamcast. “It was very unique, it was very new,” he says. Sega had big bucks riding on the Dreamcast, and were willing to take creative leaps with add-ons like the VMU.

Jeremy Saucier, assistant director of the International Center for the History of Electronic Games, can agree with that. He says Sega needed a hit, and threw everything they had into the Dreamcast, including an odd little curio called the VMU. The company already had a caboose of hardware dragging along behind it–there was the Sega Saturn, the Sega Genesis–and the Dreamcast would be their last stand. Why not try something new?

The VMU, released for the United States in 1999, was part of that extra-creative stand. It didn’t look like much, but it was something different to sell on. It allowed for something like two games in one, where a series of mini-games were available to play separately or in concert with the action on the TV (as long as you had a couple watch batteries to power it). You could hide the plays you selected from your opponent during a football game, or monitor your health bar off of the main screen.

It was a small part of what made Sega look forward-thinking, and it was financially beneficial, too. Sega could sell the memory needed to play their games separately from the console, and offer a creative “bonus” of being able to see something on your VMU while you played your game. The VMU was Sega’s Dreamcast pitch etched on an LCD screen: “Come to us. We’re ahead of our time.”

“But sometimes being ahead of your time is not a good thing,” Saucier says. What might’ve ultimately doomed the Dreamcast, and thus the VMU, was putting out innovations without the support necessary to keep them going. The VMU was “pretty underutilized” by most accounts, Saucier says. So if the VMU is representative of Sega’s successes in hardware, it’s representative of its failures, too. The device–and similar innovations, like the Dreamcast’s built-on modem–didn’t save Sega. Soon enough, the company was struggling to stay afloat. The release of the PlayStation 2, an easier platform for developers to hop aboard, was the knockout punch for the Dreamcast and the VMU.

The VMU, says Loosen, is a memento mori of the intensely creative period the Dreamcast team went through before the console kicked it. But that’s not all it is. There’s still the lingering influence of the idea and the risk Sega took to implement it, an influence still felt by Nintendo, which is in many ways the last of the old guard of gaming. Console gaming used to be controlled by companies dedicated to gaming–Sega, Atari, Nintendo–but now Nintendo is all that’s left to slug it out with general electronics makers like Sony, Microsoft, and Apple. Will an aspiring artist be painting a Wii U in a decade? That remains to be seen.