Is it heavier? Faster? How do old apps look? How's the LTE? You asked, we answered 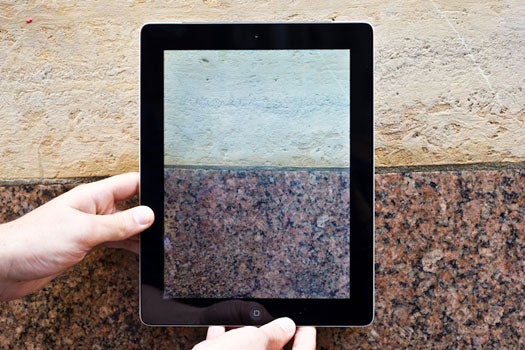 The new iPad is an uncomplicated update. It’s a spec bump year, not a redesign year: what’s different, aside from the stunning high-res Retina display, is mostly inside. Internal specifications are important, but what matters most is how it feels to actually use. We’ve been using the new iPad since Friday, chatting with you guys on Twitter all the while, and here we’ve pulled together our review as a list of frequently asked questions and answers aimed to help you make that all-important decision: to buy or not to buy?

How does everything look on the Retina display?
With four times the pixels to fill on the new Retina display, we (and Twitter users like @innerarity) were worried that lower-resolution apps and content would look noticeably worse than on the previous iPads’ 1024×768 screens. But overall it’s actually not as bad as we thought. Streaming video is very similar on both screens—I’m not sure if that’s to the new iPad’s credit or detriment. But we had trouble spotting much difference at all in quality when watching high-quality YouTube videos and Netflix’s “HD” streaming. True 1080p HD videos (at 1920 x 1080 pixels, available via iTunes as of the version 10.6 update), played on the Retina display with a slight but not-unnoticeable improvement in fine detail, color saturation, and contrast. 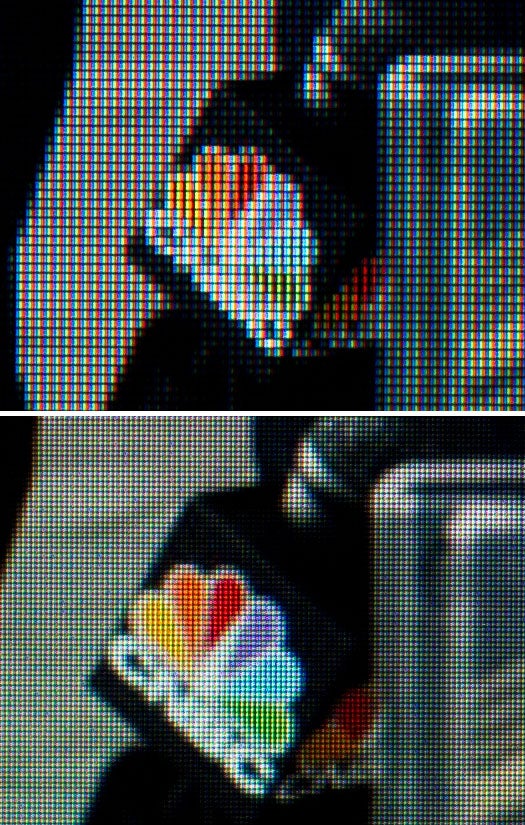 So you can see up close just how tiny and dense these pixels are: the top shot is an iPad 2, the bottom an iPad 3.

Where you really notice the disparity in image quality on the new screen is when low-resolution images appear next to text, which is almost always rendered razor-sharp by the GPU. This happens a lot during normal web browsing. Modern web pages are designed to fill a browser window around 1000 pixels wide—less than half as many pixels as the Retina display’s horizontal resolution—which means most web-resolution images will be stretched on the iPad in comparison to the rest of the page. So until the web is upscaled to approximately twice its normal resolution (whisper: that might take a while!), expect photos and graphics in Safari to look fairly ragged in comparison to the ultra-sharp text right next to them.

Is it faster?
On paper, yes. But in all the apps we tried, we couldn’t detect much of a difference compared to the iPad 2. The resource ceiling is certainly higher with double the RAM (512MB to 1GB) and the new A5X chip’s quad-core graphics unit (the main processor remains dual-core), but until we see app developers taking full advantage of this new horsepower, the speed boost won’t feel significant.

Compared to the iPad 1, on the other hand, we definitely noticed differences–images rendered faster, apps opened immediately, the stuttering that occasionally annoyed iPad 1 owners is totally gone.

How’s the battery life?
With limited time and a battery that in some use cases can last into the double-digit hours, we haven’t yet tested the battery in a scientifically comprehensive way. But we did run the battery down doing something very strenuous–continually streaming a movie from Hulu–to see how it copes with a difficult task, and we’re happy to say it did quite well, lasting six hours and fifteen minutes (or approximately 2.2 viewings of Hoop Dreams).

Any side effects from the bigger battery?
Actually, yeah. Even though the physical body of the new iPad is basically the same size as the iPad 2, the new iPad has a totally new battery. According to our friends at iFixit, the new iPad’s battery boasts an energy rating of 42.5 watt-hours, almost double the iPad 2’s (at 25 watt-hours). To do that, Apple physically increased the size of each cell by about 70%. That’s mostly good news–it needs that extra power to cope with the new processor, memory, 4G LTE radio, and new screen–but it also has one unfortunate side effect. The thing takes forever to charge. To be fair, we’re comparing it to the iPad 2, which fully charges in just a couple of hours when plugged directly into the wall, but the new iPad seems to need an overnight shot of power to get back to 100%. Expect even slower charges via USB.

Left: both iPads together, with the (hotter) iPad 3 on the left and the iPad 2 on the right. The middle image is the iPad 3, and the right-most image is the iPad 2. Note: John is not wearing sunglasses. Our infrared FLIR gun makes all regular-glasses-wearers look like they’re wearing shades.

Does it get hot? (asked by @AlertCat)
Yeah, it does. It’s not going to sear a piece of meat (not well, anyway. Yes, I cleaned it), but it definitely gets hotter than the iPad 2.

Above, we shot both iPads with a FLIR infrared camera to measure heat, and found that it’s about four degrees Celsius hotter than an iPad 2 here after an hour or so of heavy use on both–a not insignificant number.

Is it heavier?
Yeah. It’s the first iPad–hell, first Apple product ever, in my memory–that is actually thicker and heavier than its predecessor. The differences are slight, but you can tell the difference if you’ve got them side by side. It’s not a big deal, though; there are thinner and lighter tablets out there, but the iPad is still above average (or below average?) in overall size for a tablet. It’s pretty small, is what we’re saying.

Does the Smart Cover work?
Yes.

How’s the voice recognition? A good replacement for Siri? (asked by @CharlesCrawford)
No. The voice recognition, employed here primarily as a text-entry method, is kind of awful. It can only reliably recognize the simplest of words, spoken slowly, and–wait, did we say “reliably”? No. It can’t really do that, either. Our experience with Android’s voice recognition system for text entry has definitely been better. We’re kind of unimpressed by voice control to begin with, so we don’t really miss it, but if you’re expecting to dictate your next research paper or thousand-word love letter to your iPad…don’t.

How’s the new camera?
It’s better than the iPad 2’s, but that’s not saying much. At all. The iPhone 4S’s, which is about as good a phone camera as you’re likely to find right now, still unsurprisingly blows this camera away. But to back up for a moment: It should be illegal to use the iPad camera for photography. I would consider running for public office in order to co-sponsor a bill that confiscates the iPad of any user who uses the camera in public. It will never not look ridiculous. Vote Nosowitz in 2014.

How fast is LTE? (asked by @TriFantom)
At the PopSci Satellite Office (aka my apartment) in Brooklyn on Verizon’s LTE network, we averaged 9.3 Mbps download and 4.51 Mbps upload speeds–not quite as fast as my cable connection at home, but damn close, and way faster than any 3G connection. At our midtown Manhattan office, it averaged an expectedly crazy 27.25 Mbps download and 10.74 Mbps upload. So, basic answer: it’s fast. 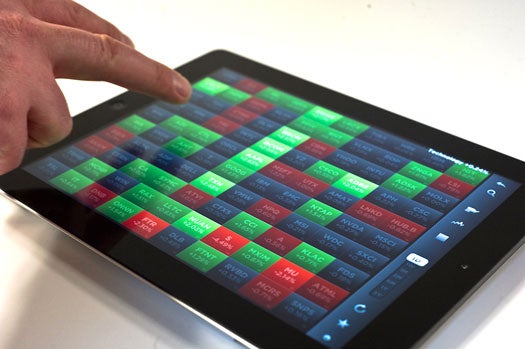 This is StockTouch, one of the apps that’s been optimized for the new iPad’s screen.

Which apps look best?
As of now, only a handful of apps are actually optimized for the new screen (those include a few games, like Infinity Blade 2, and some top-tier apps like Flipboard, plus all the built-in apps like Mail and Google Maps). Those look great! Some other apps look intermittently good, especially ones focused on video streaming. Apps that haven’t yet been up-scaled are noticeable, though. The interface on IMDb’s app, for instance, may look lousy right now, but they’ll fix that soon. And the videos still look great.

I want to buy a tablet. Should I buy this one?
Probably. It’s the best tablet out there–the only one anywhere near as good is the iPad 2, which is sort of embarrassing for everyone else, but there it is. It’s got great hardware, a great operating system, a huge and impressive selection of apps and available content, and most importantly, the iPad has always been really fun to use. So the answer is yes (or, consider capitalizing on the glut of used iPad 2s on the market for cheap).

Should I upgrade my iPad 1 or iPad 2? (asked by @entionDeficit)
Ah, a harder question. I’m going to go ahead and say no if you’re coming from the iPad 2. The new screen and faster mobile internet are both great, but they’re spec improvements, not functional improvements: you can’t do anything new and different with this iPad that you can’t do on the previous version. It just makes all the old stuff a little better.

If you’re coming from an original iPad, the question is a bit trickier. The apps and games hungriest for processing power do run noticeably smoother on both newer models. And with a svelter frame, Smart Covers, the Retina display and high-speed 4G, the new iPad may be an attractive upgrade for some craving the latest model. But the original iPad remains a very capable tablet, and again, there’s nothing you can’t do on the original that you can do on the newer models.

It’s possible that once I see some 2,000-pixel images of baby polar bears in an issue of National Geographic in a few months that I’ll change my mind entirely, but right now, I think any current iPad owner should save their money and hold out for what Apple uncorks this time next year.