An Apple TV With Siri Could Finally Replace Remote Controls

Stop with the gimmicky remotes. Give me voice or give me buttons 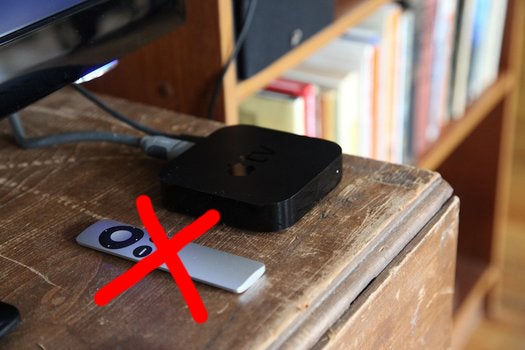 One of the smaller rumors going around about today’s Apple event predicts that Apple will release a new version of its little black set-top box, Apple TV. A sub-rumor suggests that this Apple TV might incorporate Siri, Apple’s voice-command Lady of Wonder. Siri on Apple TV could legitimately be the first alternative way to control your TV that isn’t actually worse than a black plastic stick with buttons on it.

The handheld, button-powered remote, evolutionarily, is kind of as good as it will ever be. Manufacturers of TVs, as well as assorted gadget and accessory makers, are all too willing to cram whatever trendy technology they can find onto remotes. Touch controls! Capacitive screens! Apps! Motion sensing! And none of them really work.

Meanwhile, the need for them to work is growing: As TVs and connected boxes do ever more things, we need a way to navigate them that’s as effective as the way we navigate through our phones, our computers, and our tablets. New TVs have apps, they have games, they have news and photos and video chat and Netflix and Hulu and Pandora and Spotify and even live TV. It’s time for a new system that feels like an elegant and appropriate way to take advantage of all that good stuff.

Samsung has shown off a new remote control that eliminates almost all of the buttons in exchange for a touchpad. I like eliminating buttons; one of the problems with the venerable clickers is that they’ve turned into forearm-sized slabs with dozens of unhelpfully labeled buttons, most of which you’d never use even if you understood what they did. It’s time to tear it down and start over, so I’m happy to see some work on that front. 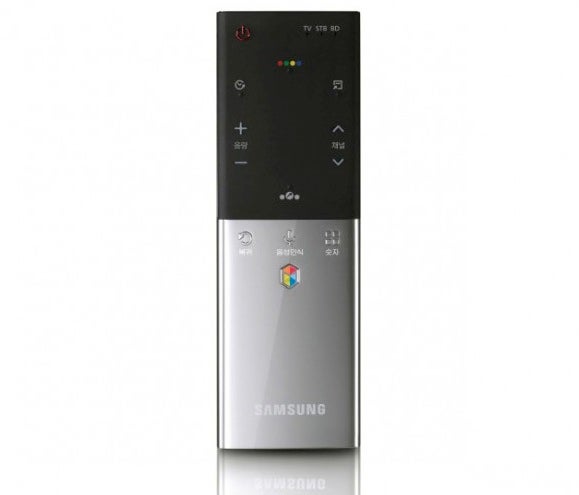 But this remote is not the answer. It has some very good ideas, to be fair. Samsung’s new Smart TVs ape both the gesture and voice control from Microsoft’s Kinect, and Samsung stuck a little microphone in the remote itself, so you can speak at a relatively normal volume instead of hollering across the room at your TV. Smart! But I didn’t care for the remote itself. There’s no easy way to “favorite” or “bookmark” channels, which means you have to scroll through a list of them with a downward swipey motion or type them in with a keypad. Only, there is no keypad; there’s an onscreen grid with the numbers one through nine on it, which you scroll through with the touchpad. It’s a pretty bad compromise. And the general problem with touch commands is a lack of physical feedback: there is no benefit, besides trendiness, to replacing a button that you can grope for and depress in the dark with a touch area that you cannot.

Other alternative methods of control are lacking, too–anyone who has tried to navigate through the Kinect’s menus with their arms knows that it’s silly and fun but so inefficient compared to an Xbox controller that no reasonable person would really rely on it as their go-to method of control. Roku’s fancified new remote packs motion-sensing as well–and aside from its use to control a slightly awkward version of Angry Birds, you’re better off sticking to the buttons.

There are quite a few smartphone apps that act as remotes as well. These are good in some ways–searching works pretty well, with a pop-up keyboard on your phone–but the problem with touch is that you can’t simultaneously look at your phone and at the TV at the same time. You’ll either end up hitting the wrong parts of your digital control pad while trying to do it by feel, or you’ll bob your head up and down like a filthy pigeon trying to maintain sight of two screens. And we are not pigeons, my friends. No, we are not!

For me, the Boxee Box’s remote is about as good as it gets: a tiny stick, on one side boasting a simple five-way directional pad, a play/pause button, and a back button. Flip it over, and you have a QWERTY keyboard, with actual buttons. But is this what we’ve come to? Where’s the future? Where are our mind-reading TVs? 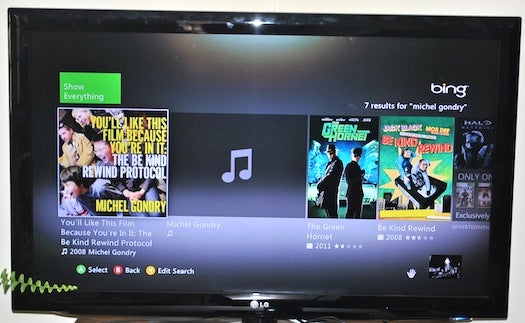 The closest we’ve gotten to a true next-gen option is the Microsoft Kinect’s voice control. It’s come a very long way, and in some specific instances, it’s better than the Xbox controller. Search especially comes to mind–scrolling through an on-screen alphabet is an annoyance that’ll grow in frequency as more and more people hook their TVs up to the internet. But things like moving between screens, browsing through lists when you’re not sure what to watch–they’re just better suited to pressing a button. The Kinect takes some helpful steps toward that difficult task of browsing: you can search for some metadata, like directors and actors. But the Kinect is still a closed environment–it has, at the moment a limited number of responses to a limited number of specific commands. Siri doesn’t have that problem.

Siri’s ability to parse human language and deliver results–theoretically, I mean–could be perfect for lounging on your couch on a Sunday afternoon, wondering what to watch. It’s not a “voice command” situation, really: you don’t give it trigger words, you just speak normally and ask for what you want, which is a definite step up from the current capabilities of Kinect. You could ask for movies similar to your favorites. You could ask for that movie about the magicians, or something, where David Bowie plays Nikola Tesla (that is a real movie). You could ask for a TV show with a mystery, made in the last ten years. Assuming Apple can get Siri to live up to expectations, this could be pretty amazing. And Siri isn’t the be-all-end-all of voice command; it’s not the only service to use natural speech recognition, and there’s no particular reason why Microsoft (or Google, or anyone else) couldn’t jump in and implement it just as well. Apple just has a head start, because Siri’s already packaged and ready to do this kind of task.

Of course, there are some tasks for which I’m not sure a remote will ever be bested. Saying “Xbox! (or Siri!) Pause!” just isn’t as quick and painless as hitting the play/pause button. But for browsing, searching, and discovering, voice command should be the future. We’re not sure that future will be today–there’s a pretty good chance today will be iPad-only–but the promise of Siri-powered TV is enticing whether or not it becomes a reality in a few hours.