Samsung’s Diving into the Future of TV With a 55-Inch OLED Set, For Sale This Year

We don't know when, other than "this year," but Samsung's intent to sell marks a big step in TVs 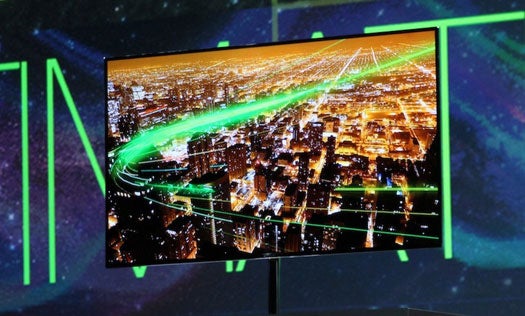 As the world’s largest and most popular TV manufacturer, it’s worth paying attention to the direction they take at the high end. This year, that high end is defined by their own 55-inch OLED TV, which it sounds like they intend to actually sell this year.

Unlike LG, who rolled out their own 55-inch OLED while staying quiet about availability details, Samsung said their Super OLED set would be “coming this year.” Viewed from a distance on stage, it seemed to carry OLED’s signature eye-melting color, liquid-smooth response time and deep, deep blacks. It’ll also ship with Samsung’s full Smart TV package, which now includes a built-in camera and microphone for voice- and gesture-recognition interfaces and video conferencing. No word on cost, but, assume it’s damn expensive. It’ll be interesting to see when more concrete release details roll out, but if Samsung manages to deliver, they’ll join Sony as the only company to ever actually sell an OLED television (we awarded Sony’s XEL-1 OLED a Best of What’s New award when it debuted way back in 2008).

We’re still excited to hear more about whether LG intends to roll out their own 55-inch set this year. Hope so. And we’ll see if Sony has a similar offering in a few hours at their own press conference later. Stay tuned.