Been let down by spurious 4G claims before? Not this time--the Thunderbolt even bested my home internet speeds 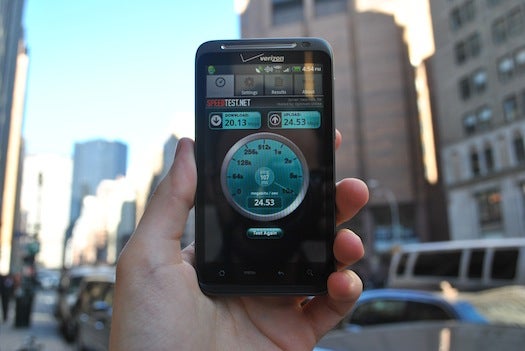 The HTC Thunderbolt is important for one reason: 4G. But that one reason promises to change the way mobile phones are used, the same way that the move from dial-up to broadband at home led to a completely revolutionized computing experience. The Thunderbolt is, on the whole, a really nice phone: it takes proven hardware and taps it into Verizon’s ludicrously fast LTE 4G network. But should this be your next smartphone? Well…maybe not.

This is Verizon’s first big boy HTC phone, packing a 4.3-inch screen. It has a front-facing camera for video chat, which is another first for Verizon. Most importantly, though, it’s the first phone to use Verizon’s brand-new LTE 4G network, which is available in most urban areas and is screamingly fast.

HTC has been churning out the same phone, with minute differences, for years now. It’s a good phone, don’t get me wrong, but it’s time for something new. That something seems to be the Evo 3D, which looks excellent. But in the meantime, the Thunderbolt is basically Verizon’s version of the Evo 4G or Inspire 4G.

Hardware: That being said, one of the benefits of making essentially the same phone over and over is that you get pretty good at it. The Thunderbolt is a well-crafted phone, with a pleasant, metallic heft and no weak spots to creak or bend. It’s a bit plump, which we can chalk up to the new antenna and large battery–at 13mm, it’s thicker than the very similar Inspire 4G and significantly thicker than the 9.3-mm thick iPhone 4. It’s heavy, too, but I kind of like heavy phones–they feel more solid and better-constructed than featherweight plasticky phones. The Thunderbolt isn’t unattractively obese or anything, and fits well in the hand. I do very much like the kickstand–it’s sturdy, and places the Thunderbolt at an ideal angle for movie viewing. With a screen this big, it’s nice to be able to prop it up on an airplane seat-back table to while away a flight with episodes of Jersey Shore. 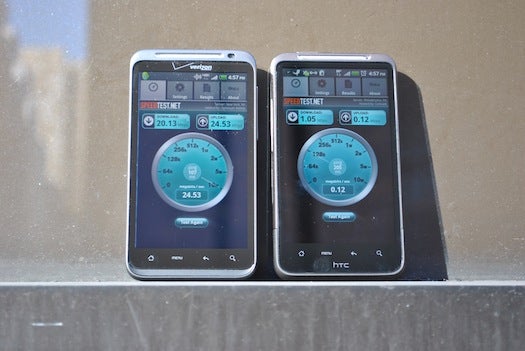 On the left you see the Thunderbolt, using Verizon’s 4G, and on the right is the Inspire, which uses AT&T;’s “4G.” One of these is impressive.

4G: Verizon’s LTE network is just as fast as you’ve heard. Unlike AT&T’s “4G” network, which in our tests proved to be mostly a marketing boondoggle, Verizon’s network routinely delivered speeds faster than my home internet. Using the SpeedTest.net app, the Thunderbolt averaged 17.51Mbps download and 28.43Mbps upload speeds from our Manhattan office. Compare that with AT&T’s “4G” network (an HTC Inspire 4G scored 2.01Mbps download, 0.24Mbps upload) and Verizon’s 3G (an HTC Incredible scored 1.81Mbps download, 0.79Mbps upload), and it’s pretty clear that the other networks aren’t in the same league as LTE. Hell, my home internet connection in Brooklyn only averaged 15.54Mbps download and 2.87Mbps upload speeds.

We also tested tethering speeds, since that’s one of the uses that’ll benefit the most from the added boost of speed. It seems Verizon is putting a cap on tethering speeds, but it’s still far higher than the other options. Using the built-in Wi-Fi hotspot app from HTC, the Thunderbolt managed 4.44Mbps download and 5.39Mbps upload. The HTC Inspire 4G could only score 1.95Mbps download and 0.28Mbps upload. As for Verizon’s 3G network, my only Wi-Fi tethering option was a Palm Pre Plus, and the different OS and different software adds some variables that might complicate the findings. Still, to give an idea of the massive leap from Verizon 3G to 4G, the Pre Plus scored 1.33Mbps download and 0.43Mbps upload.

What would be mindblowing is a genre that has emerged as a gaping hole in the otherwise thriving Android Market: video. There is no legitimate, widely-used streaming video app in the Android Market–no Netflix, no Hulu–and even though the Thunderbolt has a front-facing camera, there’s no Skype for video chat. You can’t use other video-chat apps, like Fring, either–the front-facing camera is basically useless at the moment. This isn’t just a case of an app’s absence being kind of a bummer: Without Netflix, Hulu, and Skype, the Thunderbolt’s ability to get the most out of that blazing fast network is seriously undermined.

Qualcomm, makers of the near-ubiquitous Snapdragon chip, has announced that they’ll bring Netflix to Android as soon as possible, but only for certain phones. The Thunderbolt, with a fairly modern Snapdragon, is more likely than most to actually see a Netflix app, but there’s been no confirmation, and we can’t recommend a phone based on something that might happen sometime down the road.

The Thunderbolt’s hardware is also straddling the line between current-gen and last-gen. It’s not outdated, exactly, but there are much more powerful phones on the market and it’ll seem outdated soon. The 1GHz processor, the 768MB of RAM, and especially the 800×480 resolution screen–that’s a year-old configuration, easily bested by dual-core beasts like the Motorola Atrix 4G and LG Optimus. The next iPhone, likely coming in June, will also probably have a dual-core processor like in the iPad 2, further prematurely aging the Thunderbolt. The Thunderbolt feels slightly sluggish in comparison with those phones (or even the single-core Nexus S), occasionally stuttering over a command or failing to keep up with a fast scroll.

Battery life is usually the first thing to suffer when using more data than usual. The Thunderbolt’s spiritual predecessor, the Evo 4G, had notoriously abysmal battery life, and while the Thunderbolt’s isn’t quite that bad, it’s definitely less than we’d like. The problem seems to stem from the fact that it’s not possible (at least, I couldn’t figure out how) to manually switch to 3G to conserve battery life. That forces the Thunderbolt to use 4G at all times, which is nice and fast, but pretty tough on the battery. My tests aren’t scientific, but in daily use, I found my Thunderbolt needing a recharge by mid-evening. If you’re very careful, using minimal screen brightness, turning off Wi-Fi and GPS, forgoing battery-killing activities like streaming music or watching videos, I’m sure you could make it through a whole day–but what’s the point of that? This is a supercharged phone; I want it to be as impressive as it possibly can be, all the time.

$250, with a two-year contract. Most top-tier Android phones cost $200, but this is the first 4G phone, plus it comes with a ton of storage (8GB internal and a 32GB SD card), so we think the price is fair.

Using the Thunderbolt feels better than using a 3G phone: Streaming audio doesn’t need to buffer, apps download instantaneously, web pages load in a snap. But without the apps to really make use of that speed, we’re left with merely a general feeling of speediness, rather than those moments of “Whoa.” that we wanted. Not to keep harping on it, but Verizon should have nailed down Netflix, Hulu, and Skype before releasing this phone.

I’m really excited about Verizon’s LTE network. It’s everything we wanted, and I don’t even mind the cap on tethering (let’s leave some bandwidth for everyone else. Selflessness is important!). The Thunderbolt is a great first step, and is without a doubt the best Android phone on Verizon at the moment, but unless you’re an early adopter, it might be smart to wait for the next step–a dual-core phone from Motorola? A multimedia wonder from Sony? There will be a phone, and soon, that blows minds. The Thunderbolt is more like a tasty amuse bouche.