There is a certain we try to capture here every day on PopSci.com, that effervescent sensation when the future becomes suddenly tangible, thrilling, real. That sharp, at times bewildering moment: “Wow.”

After playing for four days, I can comfortably say Microsoft’s Kinect, the Xbox 360’s new sound and motion sensor for Xbox, delivers that feeling more than anything I’ve experienced recently. I feel safe calling it a bounding leap forward in potential for the future of gaming, your living room, and the way we interact with machines. But we’re not living in that future fully just yet.

It may seem like Microsoft is crossing the finish line last in the motion-controller race, the one the Nintendo Wii started in 2006 and Sony joined earlier this year with the PlayStation 3’s Move controller. But really, Kinect is a different thing altogether. The three main hardware components are off-the-shelf: a visible-light camera, a multi-array microphone and an infrared depth sensor that sprays your room with hundreds of IR dots. Microsoft poured its massive R&D resources into the software that processes all the data Kinect’s humdrum hardware brings in. (We took a behind-the-scenes look at that software earlier this year).

It’s the software brain that knows whether you’re doing the Soulja Boy dance correctly, that filters out a room’s ambient audio profile to process voice commands with incredible accuracy and speed, that spots the difference between your face and your brother’s, instantly. What Kinect does is see and hear you, less like a machine and more like a form of intelligence. Which is pretty amazing. 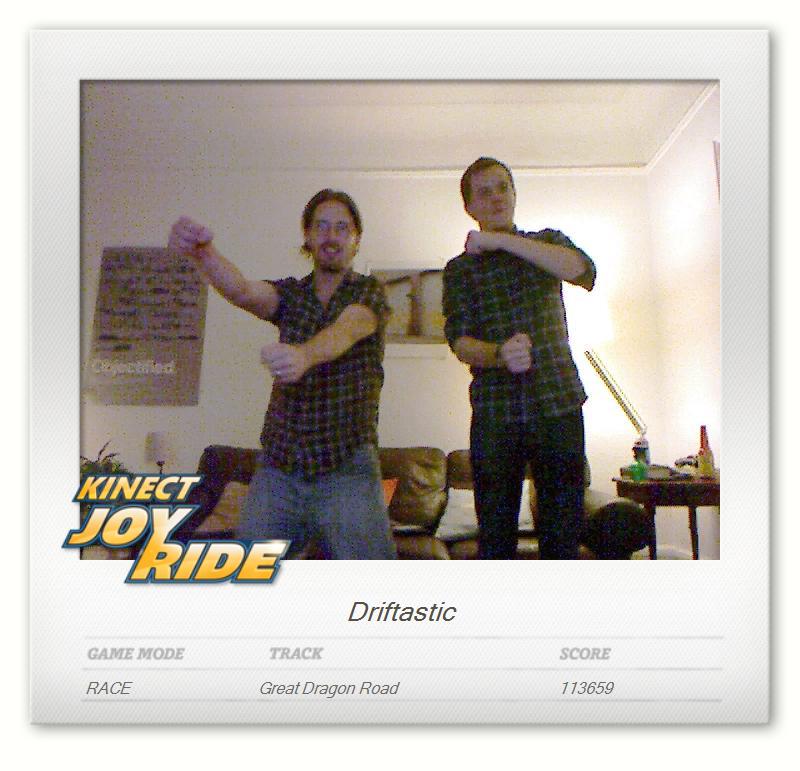 My friend Jim and me playing Kinect Joy Ride. Some of the Kinect titles can submit photos taken in-game to the site Kinectshare.com for downloading or Facebooking

It’s watching and listening: That very act of being seen and heard by a machine is what’s good. Controlling your Xbox’s menus with voice commands that work, at a normal volume and tone of voice, almost all the time. The very low level of frustration with the controls. This is what Kinect was created to do, and so far, it feels really, really right.

Dance Central: The game Dance Central, by the creators of Rock Band and Guitar Hero, is very good. As is having goofy dance-offs with as many friends as possible, and seeing yourself in the high-speed animated GIFs Kinect’s camera spits out at the end of every dance.

This: Flapping your arms to fly in zero gravity and holding them out to hover in Kinect Adventures. More please!

Most of the launch titles: With the single, shining exception of Dace Central, the launch titles feel more like tech demos than complete games. Which for a system like this is in many ways a necessity, but you can tell even now that most Kinect owners won’t be playing many of these launch titles for more than a few months.

That said, the tech being demo’d is still pretty thrilling, so they’re not without charms. My friends and I certainly enjoyed steering a car with our hands held Frankenstein-style in front of our faces clutching an invisible wheel in Kinect Joy Rides. Ping Pong in Kinect Sports is a blast. There is fun to be had, just probably not much staying power.

This is in some ways a good thing. When I really start to drool is while thinking about the seemingly limitless applications of some or all of Kinect’s features into future games. The launch titles have set the foundation, now it’s time to grow from there.

The space required: My apartment’s living room is 12 feet deep, with a couch flush against the back wall and the TV console flush against the far wall. This is just barely enough space to operate Kinect. In the calibration routine, I can’t really step into the back third of the viewing area. This causes the biggest problems in two-player simultaneous games. It had a hard time recognizing the faces of both drivers in a two-player Kinect Joy Ride race, and Kinect Adventures even advises against playing two-player modes in my setup.

You mean I have to stand up? Clearing your living room, standing up and really getting into it is a huge part of what makes playing a Kinect game fun. That said, I really wish it worked consistently while I was sitting down on the couch. I had a hard time paging through menus in the dashboard, or selecting and controlling videos in the Zune app without standing up. I’m fine with getting off my ass to bust a move, but not to use the default interface.

Like any new platform, Kinect is a set of tools waiting to be put to new and interesting uses. But what tools! Even with a fairly lackluster lineup of launch titles, it’s clear that Kinect’s abilities open up the Xbox 360 to so many new things. The big, as-yet unanswered question is how easy it wil be for developers to integrate Kinect features into their games. I really hope the answer isn’t “hard.” Think of what Call of Duty could be if you could give radio orders in natural speech (and without a geeky headset) to the AI-controlled members of your squad, who then responded to the level of urgency in your voice. Or, browsing Neflix with your hands while slumped on the couch.

In the launch titles, you can already see little hints of where some developers may take this. In Kinect Joy Ride, you can paint your car by holding up any object for Kinect’s camera, aligning it with what amounts to a real-world Photoshop eyedropper tool. It’s not a significant gameplay feature, but it’s an interesting taste of what just a little creativity can get you on Kinect.