When it comes to home comforts, few inventions can beat the air conditioner for its ability to help us tolerate... 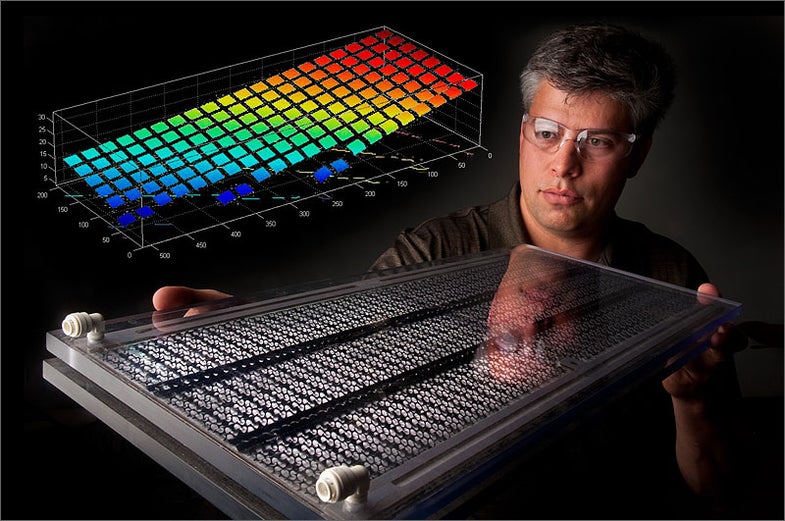 But the National Renewable Energy Laboratory has invented a new air conditioning system that uses 50 to 90 percent less energy than the best available units. The Desiccant-Enhanced eVaporative air conditioner — DEVap — combines membranes, evaporative cooling and liquid desiccants in a way that has never been done before.

NREL mechanical engineer Eric Kozubal, who co-invented the system, says the goal is to revolutionize cooling while removing millions of metric tons of carbon from the air. It cools and dries the air in one step. Evaporative cooling, blowing air across a wet surface to promote evaporation, has long been used in swamp coolers, as Technology Review notes. The DEVap takes it a step further, dividing air into two streams that are separated by a polymer membrane.

Water passes through one airstream, making it cooler and wetter. The cooler air cools the membrane, which cools the air on the other side, without making that side any more humid.

Another process dries the air, making the system effective even in humid locales — a big step toward reducing refrigeration-based air conditioning, which is used in most of the country and is responsible for about 5 percent of the nation’s energy consumption.

The DEVap uses a liquid desiccant, a solution of lithium chloride or calcium chloride, which is about 44 percent salt by volume. Most people know desiccants as those little packets of yellowish balls that come in boxes of shoes or new clothing.

In the DEVap, another membrane separates the desiccant from the rest of the air, and allows water vapor to pass through its micrometer-sized pores. The desiccant pulls moisture from the airstream, leaving dry, warm air. Then, in a second channel, water evaporates to cool a second airstream, which cools the first, dry airstream. The result is cool, dry air.

The idea of combining evaporative cooling with desiccants isn’t new — it’s just that nobody has figured out how to do it cheaply and efficiently until now.

The process uses much less energy than a traditional air conditioner, and doesn’t rely on any refrigerants, which produce chlorofluorocarbons (CFCs) and hydrochlorofluorocarbons (HCFC). That also helps the environment, because a pound of CFC or HCFC in refrigerant-based A/Cs contributes as much to global warming as 2,000 pounds of carbon dioxide, NREL says.