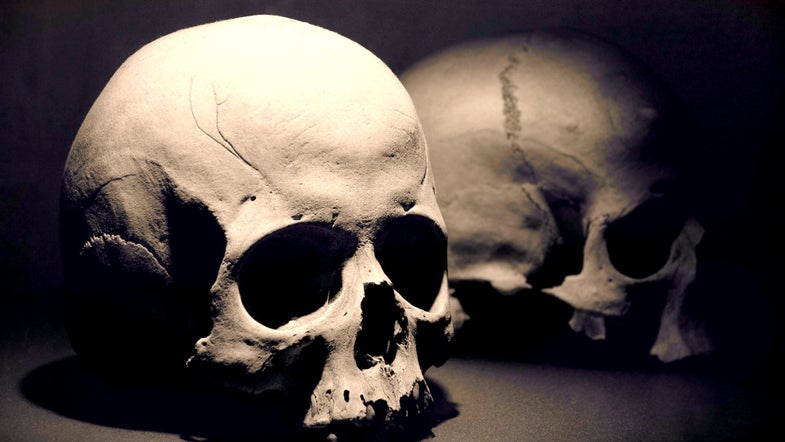 The following is an excerpt from The Radium Girls by Kate Moore.

It was shortly after nine a.m. that the men came to Rosedale Cemetery on October 15, 1927. They made their way through the rows of memorials until they stopped at one particular grave. They erected a tent over it and removed the headstone. Then they worked to uncover the coffin, heaving sodden earth out of the hole until they unveiled a nondescript wooden box, which held Amelia “Mollie” Maggia—the girl, so people said, who had died of syphilis. The men ran ropes under it, then attached stronger silver chains. It was raised just slightly, “to free it from water that had seeped in around it as a result of the recent rains.” Then they waited for the officials to arrive. Berry had arranged with the radium company that they would all converge at 3:30 p.m. exactly.

At 3:00 p.m., the specialists from the company arrived at Mollie’s grave. There were six of them, including Vice President Barker and the ubiquitous Dr. Flinn. Prudently, Berry had arranged for a special investigator to be present for the morning’s activities; he now watched the company men closely as they milled outside the tent. At 3:30 p.m., as specified, Berry walked up to the grave with Mrs. Hughes, Dr. Martland, and a cohort of New York doctors, who would lead on conducting the autopsy. There were thirteen officials in all, gathered together to witness Mollie’s exhumation.

Standing awkwardly among the doctors and lawyers were three other men: James McDonald and James Larice, Mollie’s sisters’ husbands, and her father, Valerio. The family hadn’t protested when Berry had put the idea to them. Mollie’s body could provide perfect corroborating evidence for the dial painters’ fight in court. Even after all these years, she could still help her sisters.

After the arrival of Berry’s team, preparations were made for raising the coffin. Curtains were drawn around and the entire party went inside the tent. The grave workers heaved on the ropes and chains. Slowly, Mollie rose the six feet to the surface. “The outer box was in bad condition and easily pulled apart; the casket was likewise ready to fall apart.” Despite the dim fall day, the coffin seemed to glow with an unnatural light; there were “unmistakable signs of radium—the inside of the coffin was aglow with the soft luminescence of radium compounds.”

Someone lent over the glowing coffin and pulled a silver nameplate from the rotten wood. Amelia Maggia, it read. They showed it to Valerio for identification. He nodded: yes, that was the one. That was the one the family had chosen for his child.

As soon as Mollie’s identity was confirmed, the top and sides of the casket were removed. And there she was. There was Mollie Maggia, back from the grave, in her white dress and her black leather pumps, just as she had been dressed on the day she was buried in 1922. “The body,” observers noted, “was in a good state of preservation.” They removed her carefully from her coffin, placed her gently in a wooden box, and then took her by automobile to a local undertaking parlor. At 4:50 p.m., her autopsy would begin. At 4:50 p.m., Amelia Maggia would finally have the chance to speak.

There is no dignity in death.The doctors started with her upper jawbones, which were removed in several pieces; they had no need to do the same with her lower jaw, for it was no longer present, having been lifted out in life. They sawed through her spine, her head, her ribs. They scraped her bones with a knife to prepare them for the next steps. And there was, somehow, a kind of ritualistic care in their steady tasks, as they “washed [her bones] in hot water, dried, and reduced [them] to greyest white ash.” Some bones they put to the x-ray film test; others they ignited to ash and then tested the ash itself for radioactivity.

When they checked the x-ray film, days later, there was Mollie’s message from beyond the grave. She had been trying to speak for so long—now, at last, there was someone listening. Her bones had made white pictures on the ebony film. Her vertebrae glowed in vertical white lights, like a regiment of matches slowly burning into black. They looked like rows of shining dial- painters, walking home from work. The pictures of her skull, meanwhile, with her jawbone missing, made her mouth stretch unnaturally wide, as though she was screaming—screaming for justice through all these years.There was a smudge of dark where her eye had once been, as though she was looking out, staring accusingly, setting straight a lie that had blackened her name.

“Each and every portion of tissue and bone tested,” the doctors concluded,“gave evidence of radioactivity.”

It wasn’t Cupid’s disease, as the gossipmongers charged. It was radium.

Excerpted from The Radium Girls by Kate Moore, published by Sourcebooks 2017. Published with permission.