5 reasons to hold on to old silica gel packets 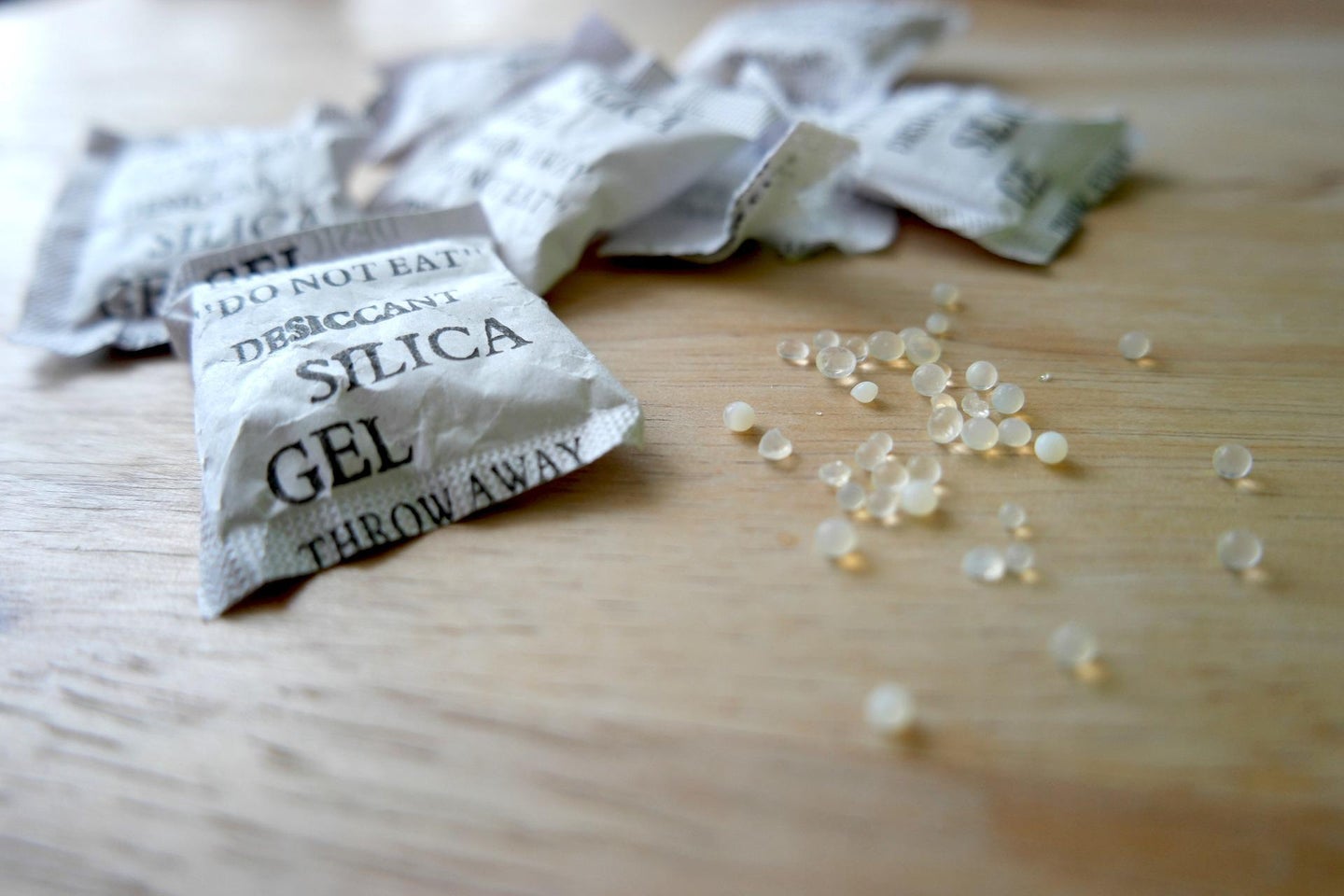 These little beads can serve a lot more purposes than as single-use waste. Pixabay
SHARE

If you’ve bought shoes, torn into beef jerky, or taken certain medication recently, you have likely pulled out at least one tiny silica gel packet. After briefly wondering why your new backpack contained a warning-labeled squishy little pillow, you probably chucked it in the garbage with the rest of the packaging.

Yet those silica gel packets are as useful as they are ubiquitous, and you can give them a second, third, or fourth life instead of sending them directly to the landfill. But why are the tiny bags in so many products? And can you reuse them?

First, here’s a bit of background on the silicone dioxide-based packets. The jewelry-like silica gel beads are a desiccant, a category of materials used to keep products dry by attracting water to their surface (meaning they adsorb, not absorb, moisture). Their moisture-wicking power makes silica gel packets immensely appealing to manufacturers, preventing water damage in products in transit or sitting on store shelves.

Although silica gel doesn’t grow on trees, the porous mineral does come from the ground. Silica is harvested through a “straightforward” mining process using open pits or dredging, according to Robert Goodin, a mineral commodity specialist with the US Geological Survey’s National Minerals Information Center. He says this usually removes vegetation and disturbs the ground’s top layer. He adds that “on occasion, explosive charges will be used to break apart the rock.”

“These little silica gel packets, they’re in everything but [use in desiccation is] actually a very small percentage of what this industrial sand is used for,” explained Goodin. “It’s less than 1 percent of the eventual end use.” He estimates that over 60 percent of silica sand —  similar to regular sand but with much more silica—goes to the oil and gas industry for fracking and other needs. Glass production uses up another roughly 10 percent.

“Recently, [the US has] been the top producer, a major exporter and self-sustaining in a lot of these end-uses for silica, so we have a strong silica—or industrial sand—mining industry” in this country,” said Goodin.

For most of these packets, a single use is all they’re likely going to get. Still, the packets that encase the silica gel beads are a relatively understudied source of single-use plastic pollution, explained Britta Baechler, senior manager of ocean plastics research at Ocean Conservancy.

“By function, [silica gel packets are] a desiccant,” said Baechler. “So if these packets are being dumped into waterways, or even onto land, it can dry out whatever environment ends up in, which can be problematic.”

[Related: How to go zero-waste at the grocery store.]

Additionally, silica works as an insecticide for indoor and outdoor uses in powdered form on “stored grain, other food, feed and ornamentals; in food handling areas; and on pets and their living/sleeping quarters,” according to a US Environmental Protection Agency fact sheet.

“That means it’s being applied in an environmental setting,” Baechler adds, “and I would surmise that if silica is used in this way and released into the environment, especially in large quantities that could have some impacts in terms of water retention in ecosystems and, perhaps, impacts on [animal and plant life] as well.”

Despite their ominous, all-caps warnings about consumption, silica gel packets are generally considered non-toxic. The real concern is the size of the beads—it’s pretty easy for a child to choke on the packet or the beads within it, although some beads are large enough for adults to choke on, too.

Still, spending a lot of time up close with silica can lead to health problems. According to Goodin, industrial workers exposed to silica dust may develop respiratory illnesses if inhaled.

And Baechler notes that some silica gel packets with color-changing moisture indication—which aren’t supposed to be used near food—contain a compound known as cobalt chloride, which several chemical manufacturers list as an irritant and a carcinogen.

“Overall it seems that when they do not contain cobalt chloride, silica gel packets are relatively safe to use,” said Baechler. Nevertheless, you should avoid reusing these packets for any food-adjacent uses just in case.

Even if food-related uses are probably out, there are still plenty of ways to safely reuse the desiccant and keep it out of landfills and waterways for a bit longer after reactivating the packets.

Passports, birth certificates, and insurance papers are all easier to use when they aren’t soaking wet. While they may survive a round in the washing machine or dryer, keeping them as dry as possible makes the most sense. Silica gel packets can do just the trick for your box of important papers.

You’ll need quite a few to be effective, but keeping silica gel packets packed away with cameras, film, videotapes, laptops, and other water-sensitive electronics and accessories can keep them safe until subsequent use. Dropped your phone or tablet in the bath? Try using a slew of silica gel packets to adsorb the water out of the electronic to bring it back from a watery grave.

Metal tools, razors, or materials risk rusting if exposed to moisture. Add some silica gel packets to your toolbox, for example, to reduce that chance of exposure. You can also use the packets to mitigate tarnish or corrosion of metal jewelry, so stick some in your jewelry box.

Dry out your travel gear

The ickiest part about swimming is figuring out how to bring home a soggy bathing suit. But storing the suit with silica gel packets can help wick that moisture away and make it easier to transport. That goes for other travel gear, too; tents, sleeping bags, and luggage can all benefit from a little less wetness.

Leather and sports gear might be fine in a bit of rain, but prolonged exposure to moisture can ruin, stain or mildew different specialty fabrics. And any boxes of seasonal clothing that you only use once a year (think: holiday sweaters) might get wet long before you open them up and realize it. Silica gel packets tucked into pockets and between layers of fabrics can adsorb water before anything is ruined.