How bad are incandescent light bulbs for the environment?

It's time to flip the switch. 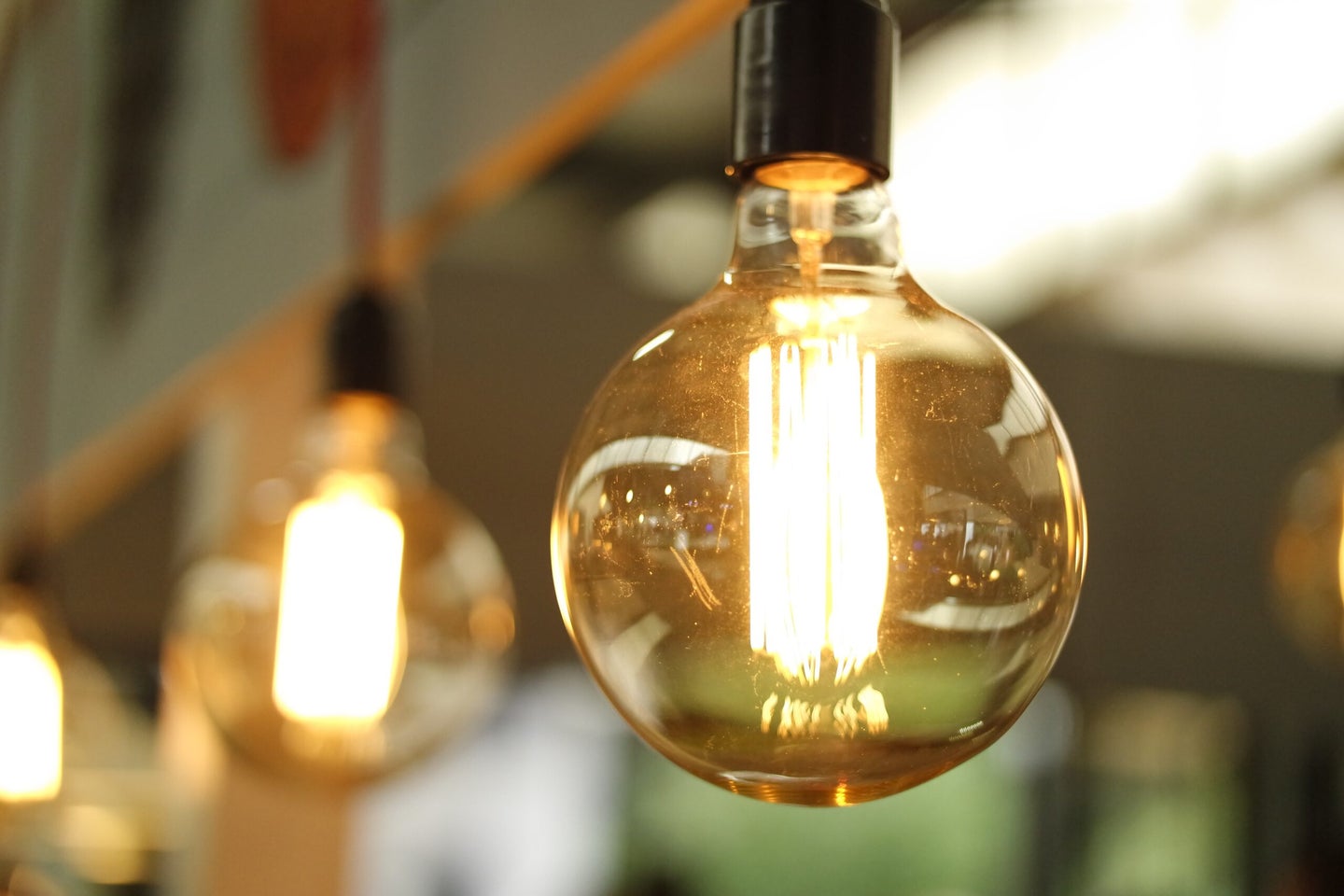 Keeping the world lit with artificial lighting comes with significant environmental impacts. About 15 percent of global electricity consumption and five percent of greenhouse gas (GHG) emissions worldwide can be attributed to lighting alone. The use of artificial light at night also contributes to light pollution in the environment, which can disrupt the behavior of wildlife and contribute to insect biodiversity loss.

To conserve energy, the practice of turning the lights off when they’re not in use is often recommended. However, it’s not that simple. The energy required to light the room largely depends on the type of bulb. Incandescent light bulbs—the least efficient type of lighting—should always be turned off when they aren’t needed. Meanwhile, compact fluorescent light bulbs (CFL), which are more affected by the number of times they are switched on and off, should only be turned off when leaving the room for more than 15 minutes.

Although switching lights off may help reduce energy use, switching to light-emitting diodes (LED)—today’s most energy-efficient lighting technology—may be even better in the long run. Compared to tungsten filament in incandescent bulbs or mercury vapor in CFLs, diodes require less electricity to produce a light output, thereby using less energy and lasting longer than other lighting options. Here’s why making the switch to energy-efficient lighting carries environmental and economic benefits.

The biggest environmental issue with incandescent bulbs is low energy efficiency. Only two to three percent of the electricity powering the bulb actually is converted to visible light, says Matthew J. Eckelman, assistant professor of civil and environmental engineering at Northeastern University. For an incandescent bulb to work, the tungsten filament inside must be heated to the point that it glows. These kinds of bulbs aren’t efficient because the rest of the electrical power supplied to the bulb that isn’t converted to visible light is lost as heat.

“Incandescent bulbs use more energy and produce more heat due to their engineering designs,” says Paul Foote, energy efficiency and conservation specialist at the University of Illinois at Urbana-Champaign. It’s important to shift to more energy-efficient alternatives to reduce the environmental impacts of incandescent bulbs from the utilization of fossil fuels for electricity, he added.

Other lighting technologies are a more efficient option. For instance, CFLs and LEDs use about 75 percent and 90 percent less energy than incandescent light bulbs respectively. Compared to incandescent bulbs, these higher-efficiency alternatives use more electricity for the production of light, not heat.

If every household in the country replaced one incandescent light bulb with a CFL bulb, it would save enough energy annually to prevent GHG emissions equivalent to what 800,000 cars would produce. Given that LEDs are more energy-efficient than CFLs, their use may reduce GHG emissions even further.

“This matters because 60 percent of the electricity in the US is still generated from fossil fuels, with their attendant emissions of greenhouse gasses and harmful air pollutants, such as particulate matter,” says Eckelman. “Air pollution from the energy system causes one in five deaths worldwide, but reducing demand for electricity through energy efficiency helps to lessen this health burden.”

According to a 2017 study published in Environmental Research Letters, if a household uses incandescent bulbs for more than three hours a day on average, it may be optimal to upgrade by replacing them immediately with CFLs or LEDs. If it’s being used for only about 1/7th of an hour, it’s better to keep the incandescent bulb and replace it with an LED bulb the following year. With the use of a model, the authors determined the best point to retire a lamp that is in working condition to obtain an optimal replacement policy among all the possible upgrade scenarios.

New bulb rules will reduce carbon emissions and save money

Last week, the U.S. Department of Energy (DOE) adopted a new rule implementing a minimum standard of 45 lumens per watt for light bulbs. This essentially phases out older, high-energy incandescent light bulbs, which don’t meet the criteria at 15 lumens per watt.

By mandating a minimum light output or lumens per watt, manufacturers make sure all bulbs can effectively light up a room, which ensures that consumers will avoid overusing energy with substandard bulbs to get the same level of brightness, says Foote. “When upgrading from incandescent bulbs to LEDs, we have noticed a 60 percent decrease in energy consumption on average, and therefore energy cost avoidance has reduced our utility bill by similar amounts for lighting,” he adds.

Once the new rules from the DOE are fully implemented next year, consumers are expected to save nearly $3 billion per year on their utility bills. Moreover, they don’t have to buy bulbs as frequently as they used to because energy-efficient bulbs last much longer than incandescent ones.

“Incandescent bulbs have shorter lifetimes compared to other lighting technologies like fluorescents or LEDs that can last 10 to 50 times longer,” says Eckelman. “This means that consumers won’t have to replace bulbs as often. Typical incandescent bulbs operate at about 15 lumens per watt, so the standard represents a tripling of energy efficiency at a minimum and electricity for lighting will decrease by at least two-thirds.”

About 222 million metric tons of carbon emissions are projected to be slashed over the next 30 years thanks to the new rule. Still, ensuring that everyone has access to affordable energy-efficient bulbs is a crucial step.

According to a 2018 study published in Applied Energy, energy-efficient light bulbs are less available and more expensive in high-poverty areas and smaller stores. The cost to upgrade from incandescent to LED lighting was also found to be twice as high in higher-poverty areas. Equitable access to affordable energy-efficient lighting across all populations is paramount as the nation transitions to more efficient energy use.

With the new rules from the DOE, energy-efficient bulbs will become the norm, which should improve access, says Eckelman. Since 2008, the price of LED bulbs dropped by almost 90 percent. Although the upfront cost of LEDs remains higher than incandescents, households can still end up saving between $50 to $150 per bulb, depending on local electricity prices, he adds.

“In order to lessen the burden of this transition, though, many states run energy efficiency programs, often funded by utilities themselves, that provide LEDs and other energy-efficient technologies at a discount,” says Eckelman. “Ramping up these sorts of programs and increasing outreach efforts in lower-income areas will certainly help.”