Imaginary creatures rule the universes of various video games, maybe none more notably than the fantastical beasts you can create... 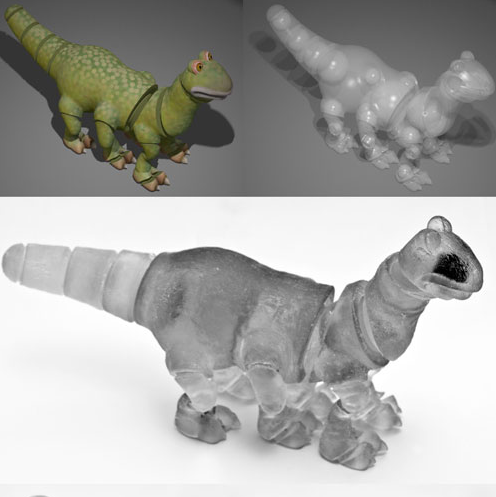 Imaginary creatures rule the universes of various video games, maybe none more notably than the fantastical beasts you can create all by yourself in “Spore.” Ever wonder if your two-headed, seven-eyed four-legged dinosaur-thing would be able to stand up? New software developed at Harvard will make it real for you, making a new computer model and constructing a physical animal-thing with a 3-D printer.

In a new research project, computer scientists funded partially by animation studio Pixar can turn animations into physical objects. The software solves any lingering physical-impossibility problems that can stem from the unrestricted imagination, and prints out a movable object. Lead author Moritz Bächer, a graduate student in computer science, tells Harvard’s School of Engineering and Applied Sciences news site that his program can print anatomically unbalanced creatures, articulated joints and all.

It works by examining an animated character’s virtual behavior, and figuring out ideal locations for their actual joints. Then it builds a 3-D computer model of the joints’ best locations and physical attributes, which you can see at top right in the image above. The software even builds in some friction into the joints — which can be ball-and-socket joints or hinges — so they’ll hold a pose just right. The resulting model can be sintered together on any 3-D printer.

Right now, the figurines are limited to one material, so they can’t be squished or stretched beyond their moving joints, according to a Harvard news release. But the techniques for 3-D printed elastic objects exist, so it’s feasible that someday soft-bodied action figures could pop out of a 3-D printer.

Harvard filed a patent application for this technology and hopes to license it or spin off a small company, which could conceivably make action figures on demand. The team will present their work at SIGGRAPH next month.