The indicator state is asking: what's the best way to vote? 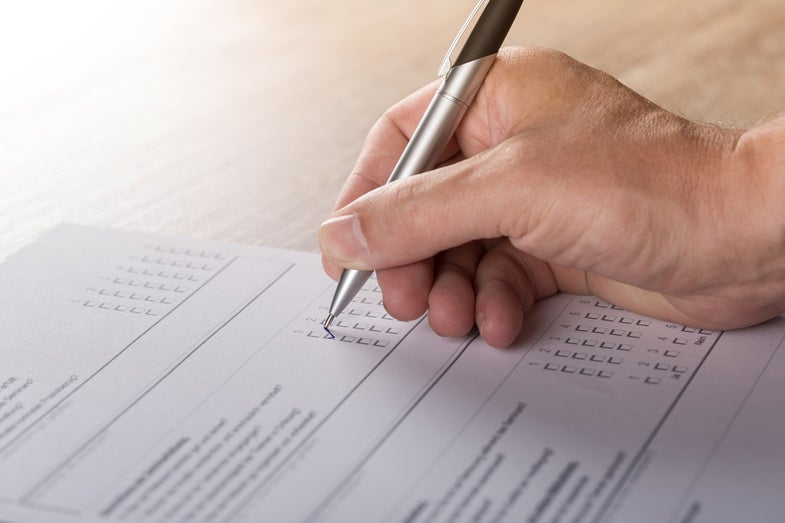 Bruce Poliquin received more than 131,000 votes in his bid to represent Maine’s 2nd district in Congress. Jared Golden got about 129,000 votes. Another 23,000 Mainers voted independent. Yet, on November 15, Golden was declared the winner.

Understandably, Poliquin and his supporters are not happy. The outcome seems to fly in the face of democracy’s most basic tenets: one person, one vote, the candidate with the most votes wins. But Maine’s voters have chosen to do things differently.

In 2016, Mainers approved an alternative scheme that redistributes votes from losing candidates until someone wins at least 50 percent. Researchers agree that the new system is mathematically superior to the old one, but that’s little consolation to Poliquin, who’s suing to be declared the winner. His lawsuit rests on a surprisingly complicated question—what is a vote?

One straightforward vote for one representative works fine when there are two candidates—a simple majority is all but guaranteed. But when the field opens up, all hell breaks loose. Imagine ten evenly-matched candidates each take 8 to 12 percent of the vote. Whoever ends up winning will represent the largest minority—or, in political lingo, a plurality—but a minority nonetheless. That happened to Maine voters twice in recent years: outgoing Governor Paul Lepage won with a bit more than a third of the vote in 2010 and a bit less than half in 2014. In both cases, he had at least two opponents.

In the wake of these elections, a system known as Ranked Choice Voting (RCV) gained popularity, and now dictates the way Mainers vote in federal elections. “The worst thing you can do is have an election where half the population would prefer to have someone else over the winner,” says William Gehrlein, a mathematician and professor emeritus at the University of Delaware. “They had to do something.”

The main idea behind RCV is to collect more information about each voter’s preferences by giving them the option to rank the candidates. If no one wins a majority of first place votes, the last place candidate drops out and their votes go to the voters’ second choices (if any) in an on-the-spot runoff election, but without the hassle or cost. When state officials distributed the independent votes of voters who had marked a second choice on Thursday, they pushed Golden into the lead with about 139,000 votes representing 50.5 percent of the state.

Proponents say RCV eliminates the fear of wasting a vote on a third party candidate, and academics love that it allows citizens to more fully express their will. “It’s still one vote,” says Dmitry Bam, a professor at the University of Maine School of Law, “but it gives a little more guidance.”

The additional information from each voter means that RCV has a much greater chance of avoiding the nightmare scenario of electing a candidate who would lose in head-to-head matchups against all other candidates—a situation known as Borda’s paradox. Researchers can debate the respective merits of various voting schemes for hours—and have, at a 2010 workshop in Normandy. But one fundamental idea almost all agree on is that a straight plurality vote is the worst way to pick a politician.

“Typically, plurality with three candidates or more is going to stink up the room,” says Gehrlein, one of the 22 mathematicians, economists, and political scientists who attended the workshop. “It’s basically driving the highest likelihood of observing a bad outcome.”

RCV’s additional guidance comes at a cost though. Even the most staunch supporter will admit that it complicates both sides of the voting process. Deciding on a ranked list is more taxing for the voter than producing one top pick. Just ask yourself: What’s your fourth favorite food? Are you sure? Compiling hundreds of thousands of rankings is also a more error-prone process than counting single choices—especially when done by hand in far flung, rural districts. That’s why 15 out of the 22 Normandy workshop attendees expressed support for Approval Voting, where you check the box next to all the candidates you support. RCV came in second with 10 votes. (They used Approval Voting to vote, so 22 would have been the top score.) Simple plurality received no votes.

Even if it’s not the ideal system, most researchers feel Maine’s update is a step in the right direction. “The US is almost exceptional in using one-round voting,” says Jean-François Laslier, a professor at the Paris School of Economics and organizer of the Normandy workshop. “I think it’s a beautiful achievement in the United States, in Maine, that they have taken this decision.”

But Poliquin, the jilted 2nd district candidate, isn’t objecting to the outcoming of the 2018 election because he thinks RCV is too hard. His lawsuit argues that the ranking essentially allows people to vote for multiple candidates. If the courts agree, this could mean RCV is in conflict with the election “by the People” specified in the U.S. Constitution. Maine’s own supreme court has declared RCV to conflict with the plurality requirement in the state’s constitution, which is why the system currently applies only to federal elections—not gubernatorial ones.

But the United States has a long history of letting states define their own election procedures, and RCV is far from the wildest scheme a state has flirted with. For more than a century Illinoisans got three votes each when electing representatives to the state legislature. You can also find RCV active in about a dozen cities around the country, and it’s the process of choice for picking Academy Awards—although that admittedly doesn’t fall under the purview of the Constitution.

Past exceptions aside, Poliquin’s lawsuit, which starts on December 5, will largely come down to the definition of “a vote.” He is joined as a plaintiff by three voters, who argue that each of their ballots counted less than that of an independent voter whose vote went to Golden in the end—essentially a double vote. This position suggests that voting is one choice for one candidate and no one else, and insists that all voters act in a similarly single-minded way. RCV, however, defines a vote more broadly. It’s a choice of one candidate, with the caveat that if A isn’t available the vote should go to B, and then perhaps C, and so on.

Ultimately, Poliquin’s own argument of disenfranchisement may end up working against him, according to Bam, who specializes in constitutional law. “It’s both nonsensical and kind of ironic,” he says. “What he’s asking for would nullify the votes of thousands of people who may have voted for the independent candidate knowing that their vote would transfer.”

Whatever happens next, political science enthusiasts at home and abroad will be watching to see how RCV weathers the legal challenge. Maine once had a reputation as an indicator state that signaled which way the political climate was headed, and Bam suggests that when it comes to innovative voting, Maine may be taking the lead once again. “Seeing more experimentation with different voting methods would be a good result to come out of this,” he says.