Getting there quickly and cleanly 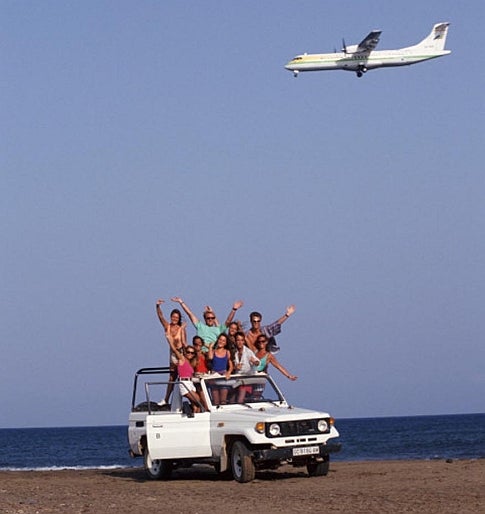 Dear EarthTalk: How can I determine if it is more eco-friendly to fly or drive somewhere? — Christine Matthews, Washington, DC

The simple answer is that driving in a relatively fuel efficient car (25-30 miles per gallon) usually generates fewer greenhouse gas emissions than flying. In assessing the global warming impact of a trip from Philadelphia to Boston (about 300 miles), the environmental news website Grist.org calculates that driving would generate about 104 kilograms of carbon dioxide (CO2) — the leading greenhouse gas — per typical medium-sized car, regardless of the number of passengers, while flying on a commercial jet would produce some 184 kilograms of CO2 per passenger.

What this also means, of course, is that while even driving alone would be slightly better from the standpoint of greenhouse gas emissions, carpooling really makes environmental sense. Four people sharing a car would collectively be responsible for emitting only 104 kilograms of CO2, while the same four people taking up four seats on a plane would generate some 736 kilograms.

Journalist Pablo Päster of Salon.com extends the comparison further to a cross-country trip, and comes to similar conclusions. (Differences in the math are attributable to the use of slightly varying assumptions regarding fuel usage and source equations.) Flying from San Francisco to Boston, for example, would generate some 1,300 kilograms of greenhouse gases per passenger each way, while driving would account for only 930 kilograms per vehicle. So again sharing the drive with one or more people would lower each individual’s carbon footprint from the experience accordingly.

But just because driving might be greener than flying doesn’t mean it always makes the most sense. With current high gas prices, it would cost far more in fuel to drive clear across the United States in a car than to fly non-stop coast-to-coast. And that’s not even factoring in the time spent on restaurants and hotels along the way. Those interested in figuring out driving fuel costs can consult AAA’s nifty online Fuel Cost Calculator, where you can enter your starting city and destination as well as the year, make and model of your car to get an accurate estimate of what filling ‘er up will cost between points A and B.

Once you’ve made your decision whether to drive or fly, consider purchasing carbon offsets to balance out the emissions you are generating with cash for renewable energy development. TerraPass, among others, makes it easy to calculate your carbon footprint based on how much you drive and fly (as well as home energy consumption), and then will sell you offsets accordingly. (Monies generated through carbon offsets fund alternative energy and other projects, such as wind farms, that will ultimately take a bite out of or eliminate greenhouse gas emissions).

Of course, an individual’s emissions from riding a bus (the ultimate carpool) or a train (many of which rely solely on electric power generated by their own motion) would be significantly lower. Paster adds that a cross-country train trip would generate about half the greenhouse gas emissions of driving a car. The only way to travel greener might be to bicycle or walk — but the trip is long enough as it is.