Forget UFOs. The first circular aircraft could soon hit the market right here on Earth. They won’t take you to space, but they might just be worth the long—very long—wait 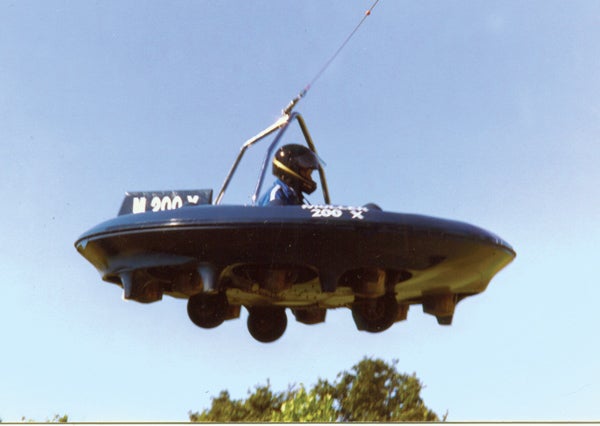 It’s designed to seat two, take off and land vertically, fly 10 feet above the ground, and reach 75 miles an hour. It’s about the size of a car, but it’s round instead of boxy. Yup, it’s a flying saucer. Next year, California-based Moller International hopes to introduce the M200G personal recreation craft, the first of what the company expects to be a full line of “volanters”—vertical-takeoff-and-landing aircraft. The design is 300 years in the making.

When the Wright brothers made the first powered flight in 1903, they inaugurated basic principles that survive to this day, including thin wings for lift and a vertically mounted propeller to provide forward thrust. But two centuries earlier, Swedish inventor Emanuel Swedenborg had already dreamed up a flying-saucer-shaped aircraft. Countless designers around the world have since envisioned round planes.

Because of their shape, circular aircraft can theoretically move anywhere—up, down, and side to side—without needing to point in that direction. This provides the potential for highly attractive vertical-takeoff-and-landing (VTOL) or short-takeoff-and-landing (STOL) capabilities, the latter of which permits the use of a far shorter runway than is needed by conventional craft of the same size. Armed forces worldwide are especially interested in VTOL and STOL airplanes because they can lift off from cramped aircraft-carrier decks or almost any flat surface in remote locations where runways are not available. Round aircraft are also advantageous in principle because they could fly faster than the other notable VTOL aircraft, helicopters, and their thin shapes are potentially far less detectable by radar, making them ideal for covert reconnaissance missions. Not to mention, the concept is just plain cool.

With all these advantages, circular aircraft should be commonplace by now. So where are all the flying saucers? Despite the benefits, the technology has long been hampered by major drawbacks. The biggest challenge is that round airplanes are highly unstable because they don’t employ the conventional aerodynamic systems—specifically, lift-generating wings and both vertical and horizontal stabilizers—that usually keep aircraft airborne. “If a plane is moving through the air at a high enough speed, aerodynamic forces can be used to stabilize it,” says Paul Moller, the president of Moller International. But VTOL craft, which must become airborne with zero forward momentum, need another way to generate lift and achieve stability.

To overcome this obstacle, Moller’s M200G uses its propulsion system to stabilize itself. The craft moves using eight small ducted fans, each powered by its own Wankel-style rotary engine, that lift the M200G into the air and push it forward, backward and sideways. Varying the thrust from the fans also provides stability—for example, a little extra thrust from the right-side engines prevents that side of the craft from dipping. Using multiple inertial sensors and accelerometers, an aircraft-stability computer constantly monitors the altitude of the craft and sends commands to the engines to adjust thrust in each fan up to 400 times per second, maintaining stability. The aircraft is constructed of ultralight materials such as aluminum and fiberglass, which increase the vehicle’s strength and maximize the engines’ power.

With a starting price of $90,000, the M200G will initially be a toy for the rich. It will be limited to flying below 10 feet, eliminating the need for Federal Aviation Administration certification of each pilot. Eventually, the company hopes to offer low-cost aircraft. “Artificial stability systems will get better and cost less in the future,” Moller says, “allowing us all to be able to afford strange and wonderful new flying machines that defy conventional aerodynamics.” Flying saucers, it turns out, may be just the beginning.

Check out the evolution of flying saucers in our gallery [here](1954 Flying Saucers Through the Ages [nid:25139] 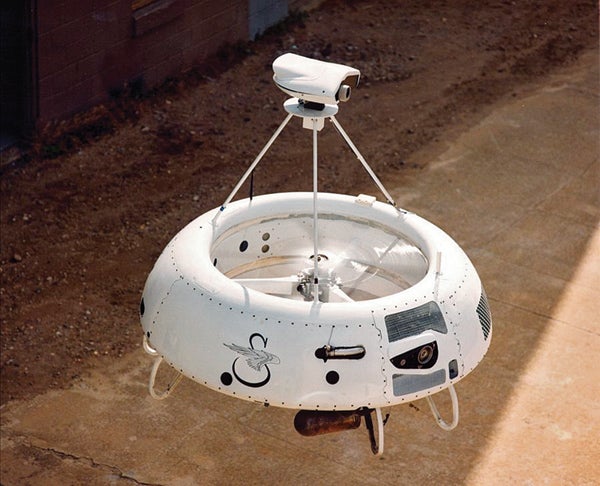 Sikorsky Aircraft Corporation in Connecticut developed an unmanned aerial vehicle in the 1980s capable of taking off and landing vertically. The doughnut-shaped, rotor-powered Sikorsky Cypher [left] was designed for surveillance and reconnaissance flights. It could fly autonomously using its onboard computer or be controlled remotely by a pilot on the ground. Until the end of the 1990s, the U.S. Marine Corps continued to develop the technology for the Cypher, including GPS navigation, visible- and infrared-light video cameras and a laser range finder. A derivative model, the Cypher II, later renamed Dragon Warrior by the Marine Corps, featured several upgrades and included wings, but the project was short-lived—the Defense Advanced Research Projects Agency, a technology-focused government group, withdrew funding in 2002. 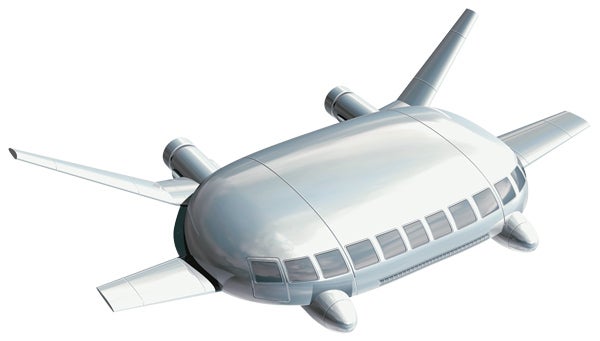 Russia’s Saratov Aviation designed an elliptical craft [left] with wings called the EKIP (which stands for Ecology and Progress) for civilian air travel and military use. Saratov tested a proof-of-concept, remote-control, model-size craft in 1994 and an unmanned prototype weighing 26,455 pounds in 1996, with the hope that a larger version would have a range of 3,278 miles and carry up to 396 tons of cargo. As a bonus, it would be able to take off and land on either a runway or water. The plane, dubbed the “Russian UFO” by the American media, was unstable during wind-tunnel testing. Several remedies were proposed, including new tail-fin arrangements, and the designs looked promising. By the end of the decade, though, the Russians dropped their support for the project due to financial concerns, and Saratov turned to the American military. NAVAIR, a division of the U.S. Navy, took interest in the project. But in 2005, it also abandoned the technology for unknown reasons, and for now, the EKIP idea is grounded. 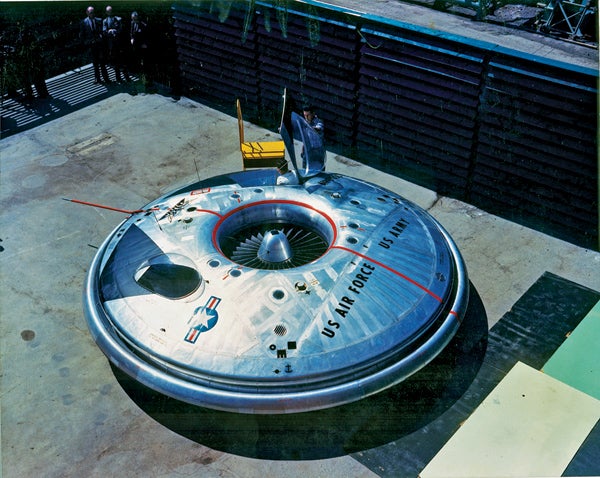 Engineers once dreamed of a flying saucer that could travel faster than the speed of sound. In 1954 British-Canadian aircraft designer John Frost began work on a top-secret craft for the U.S. Air Force code-named Project Ladybird. His plans called for a round vertical-takeoff-and-landing plane with a top speed of Mach 3.5—three and a half times the speed of sound—that could fly at an altitude of more than 80,000 feet. The Air Force planned to produce the round aircraft in several sizes, the largest measuring 100 feet in diameter. Frost even suggested that the edges of the saucer be armored, so that it could be used as a missile to attack Soviet bombers. In 1955 the U.S. Air Force changed the project’s name to Silver Bug. Wind-tunnel testing soon revealed that Frost’s ambitious craft was highly unstable at supersonic speeds. There were also doubts about the plane’s ability to withstand the high temperatures that it would be exposed to at those speeds. Frost later designed an equally unstable aircraft known as the concept VZ-9AV Avrocar [left]. A Frisbee-shaped, jet-powered vehicle, the Avrocar was a prototype for a larger circular aircraft intended for troop transport and reconnaissance. Two such craft were built, and neither proved suitable for military use. The noisy saucers pitched and rolled uncontrollably after lifting off to a height of just a few feet, and the planes could reach a top speed of only 35 mph, far below the supersonic speeds the Air Force had hoped for. The military never produced the planes. 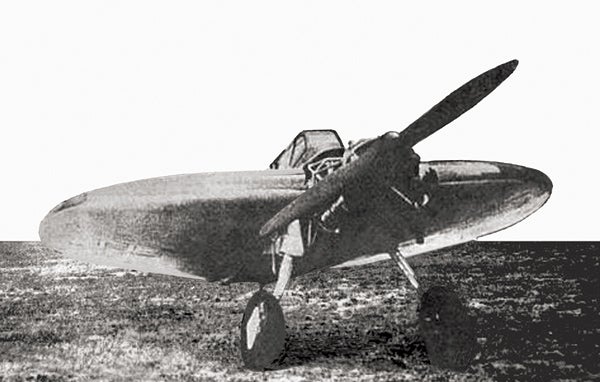 Arthur Sack, a German model-plane enthusiast, completed the propeller-driven AS-6 V-1 [left] in 1944. The elliptical craft was cobbled together with discarded parts of planes by Messerschmitt, a German aircraft manufacturer. Nazi test flights conducted by pilot Rolf Baltabol at Brandis Airfield near Leipzig demonstrated critical problems, including a dysfunctional rudder and ill-fitting parts. After more modifications, engineers also realized that the engine wasn’t powerful enough, but there weren’t resources to procure another. Various adjustments did little to help, and Baltabol recommended that engineers perform more wind-tunnel tests and replace the engine, but this never happened. That summer, another attempt with a different pilot at the controls ended with the landing gear badly damaged. The AS-6 V-1 was returned to storage at Brandis Airfield, and Allied bombing soon damaged it so severely that the remains ended up as scrap. 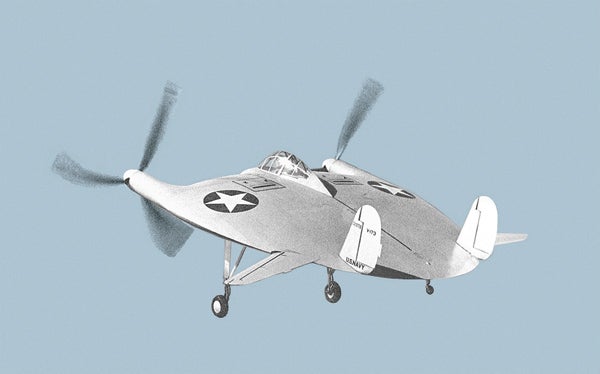 Aeronautical engineer Charles H. Zimmerman developed this prototype Navy fighter plane [left], dubbed the V-173 and nicknamed the Flying Pancake. The Navy wanted to move more of its aircraft to the water after the attack at Pearl Harbor destroyed more than 180 of its planes, and it hoped that the V-173’s STOL capabilities would permit the round, twin-engine plane to operate from both small aircraft carriers and modified freighters. The Pancake’s first test flight took place in November 1942. Because of a lightweight design and a steeply raised undercarriage angle, the plane was able to achieve takeoff in less than 200 feet. After a 13-minute flight, the plane landed in an astonishingly short distance—fewer than 50 feet, or just twice its length. With a cruising speed of just 75 mph and a maximum speed of 138 mph, however, the craft was less than ideal as a fighter plane. It was stable in the air when it flew nose-up at an almost 45-degree angle, but it pointed nose-down during landing, making it hard to control. The two piston engines were also deafeningly noisy. The Navy carried out 170 more test flights before the Pancake was finally scrapped in 1947. The plane was restored in 2003, including an overhaul of both engines and the replacement of its original skin. It’s now in storage at the Smithsonian Institution in Washington, D.C. 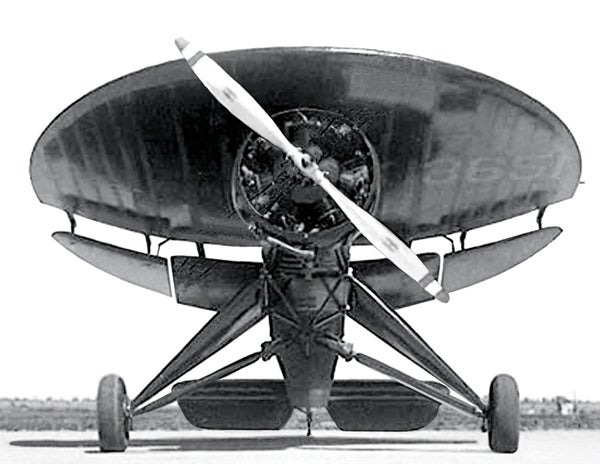 AmericaN DESIGNER Steven Paul Nemeth wind-tunnel-tested a model of his round propeller plane [left], the Roundwing, a.k.a the Umbrellaplane. Five years later, he built a full-scale aircraft, measuring 16 feet wide and 20 feet long. That year, the Roundwing made a successful flight. Nemeth soon swapped the craft’s 90-horsepower engine for a 120-horsepower model, and the plane showed outstanding short-takeoff-and-landing capabilities. It could lift off in just 65 feet and land in 25 feet at a speed of 30 mph, and it was extremely stable in flight. Nemeth hoped to mass-produce the planes and sell them for $1,400 apiece. The Great Depression, however, grounded his plans. 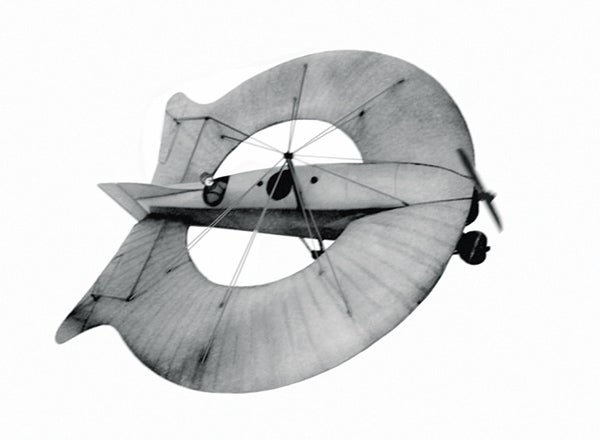 British designers Cedric Lee and George Richard hired engineer James Radley and assistant Eric England to create this wreath-shaped, propeller-driven plane [left]. England flew it five miles over Shoreham, England, before the engine died during landing. He survived the crash, but the plane itself wasn’t as lucky. The team salvaged the wreckage to create a new, modified version with three-wheeled landing gear and additional elevators, the wing flaps that move the plane up and down. The newly designed plane, which took flight in 1914, had major problems with control, and the pilot, Gordon Bell, was not able to stabilize it before a second crash landing. Lee flew a third version himself, but he lost control of the plane and ended up in the River Adur. This time the plane could not be salvaged, and the men gave up their attempts to develop a commercial aircraft. 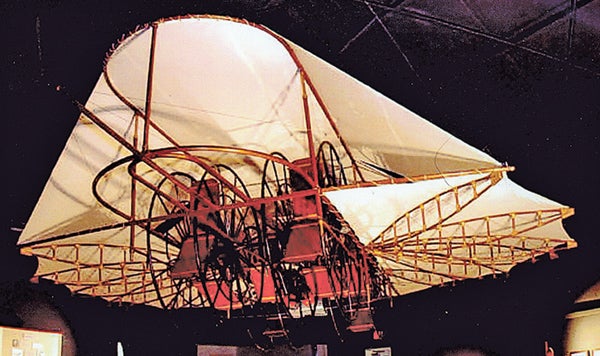 1902 Gus Stamps may have beaten the Wright brothers by a year. According to eyewitness accounts, Stamps flew the Ezekiel Airship [left], a semi-elliptical, engine-powered plane designed by Burrell Cannon, a Baptist minister, engineer and inventor. The plane purportedly flew about 160 feet at an altitude of 12 feet before crash landing near Pittsburg, Texas. 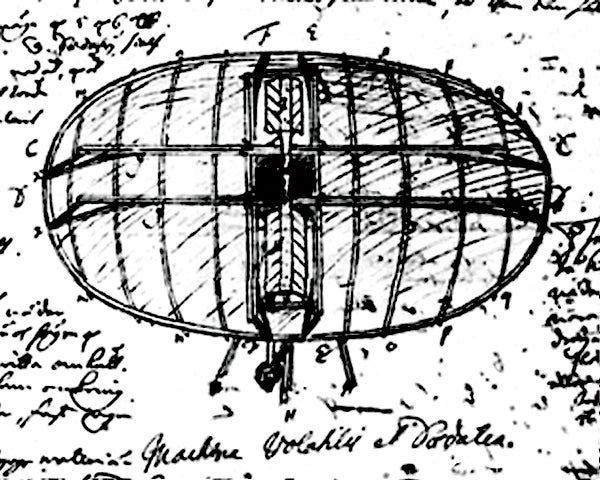 Emanuel Swedenborg, a Swedish mystic and scientist, produced the first known sketch for a rounded aircraft [left], an oval plane made of wood. Engines hadn’t been invented yet, so he devised arm-powered, cloth-covered flapping wings. A description of Swedenborg’s Flying Machine, as it’s known, appeared in a periodical in 1716, but it never progressed beyond a sketch.
Vehicles