Why Do People Sneeze in Twos and Threes?

Why Do People Sneeze? Because Your Sneezes Are Wimpy 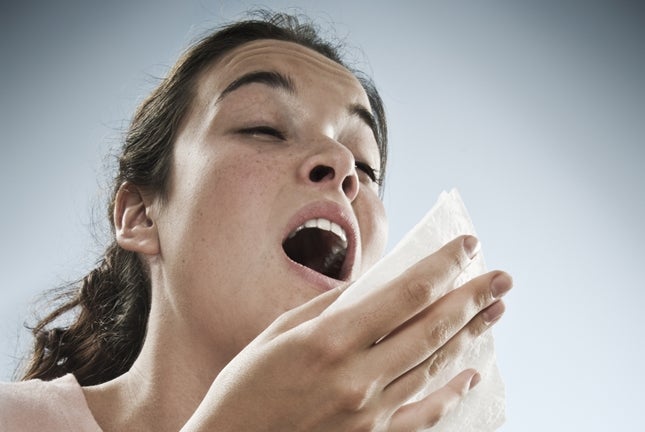 Sneezes never seem to be lonely. As soon as you expel your first mighty “achoo,” there’s usually another sneeze lurking right behind to follow it up. For some people, there may be two, three, or even 10 that come after that original sneeze, making for an awful lot of “bless yous” from well-wishers nearby. So why is it that our sneezes seem to adhere to the buddy system? Or why do people sneeze at all?

It all has to do with the power behind your nose’s blows. Usually, sneezes are initiated when a foreign particle or external stimulant enters your snout, reaching the nasal mucosa. “This triggers a release of histamines, which irritate nerve cells in the nose,” Dawn Zacharias, an allergist at University Hospitals Case Medical Center in Cleveland, tells Popular Science. “This activates and results in the sneeze. It’s a powerful release of air, expelling what’s in the nose that’s causing the irritation.”

However, if the irritant is still lingering in your nostrils after a sneeze, your nose is going to give it another go. So typically, a second sneeze means that your first sneeze didn’t really do its job. It explains why people with allergies seem to constantly be reaching for a handkerchief.

“We’re trying to clear whatever is in our nasal passages, so typically people with allergies will sneeze more often, because that allergen is still around,” says Zacharias. “Whereas if you’re sneezing from a cold, you typically have more time in between sneezes.”

As for the mega-sneezer—that person in your office who always seems to sneeze 15 times in a row—it may mean his or her sneezes just don’t pack the same punch as yours. “Depending on how her nerves are hardwired, it may mean her sneezes are not as forceful to expel whatever is irritating her,” says Zacharias. “If that’s the case, try to rub your nose or plug your nose. That way you can manually remove the allergen.”

Of course, a foreign irritant may not be triggering your sneezes at all. For about 18 to 20 percent of the population, staring at bright lights can cause uncontrollable sneezing. It’s a genetic condition called a photic sneeze reflex, and its mechanisms aren’t very well understood. Some researchers believe that rapid pupil constriction may trigger the nerves related to sneezing, but no one knows for sure. So if you seem to be sneezing over and over while enjoying the great outdoors, maybe avert your gaze from the sun for a little while.