How to Use Social Psychology to Squash Discrimination

How you can use social psychology to squash discrimination 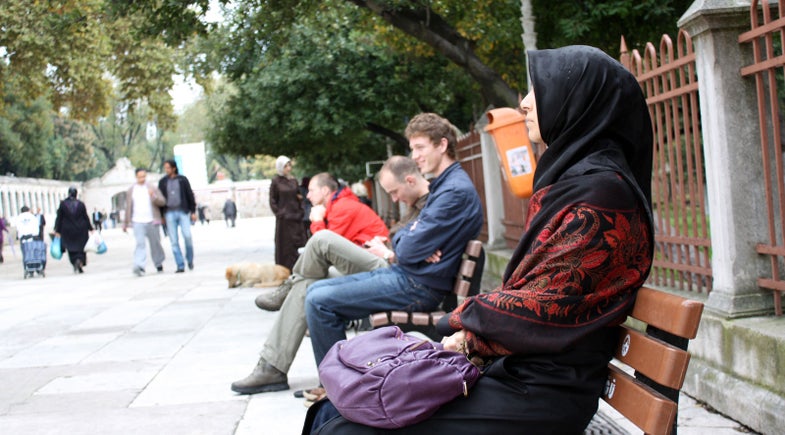 Donald Trump, a man who [[linky examples of how he’s ostracized groups]] has become our president-elect, and that’s frightening for a lot of Americans. Psychology can help make sure the fear and anger on both sides doesn’t grow out of control.

Trump made race and ethnicity a big deal in this election, using non-white people as a scapegoat for the anger and helplessness many Americans have been feeling now. Yesterday and today, a lot of people have reported witnessing or experiencing blatant acts of discrimination. Pro-Trump graffiti with Nazi symbols is showing up in some places.

And the fact that this is happening on the 78th anniversary of “Kristallnacht”—a night when Nazis terrorized Jews in the lead-up to the Holocaust—doesn’t escape social psychologist Linda Tropp from the University of Massachusetts at Amherst. “In some ways, Kristallnacht was laying the psychological foundations for what would come later, because it was an overt expression of hostility.”

When overt racial hostilities go unchecked, Tropp says, they can fester into much bigger problems. “We have to understand that potential and learn from our history, and take responsibility for making sure that nothing even close to that happens in our country.”

The origins of prejudice

Psychologists tend to think prejudice and race-related fears have a deep-seated root in human evolutionary history. Long ago our ancestors lived in small groups, fighting fiercely with other groups for control of food, water, mates, and other resources. Although the world is no longer quite so dog-eat-dog, our brains still tend to sort people into groups. Your “in-group” tends to consist of family and friends, and in general people who share your cultural values–people you feel you can trust. Everyone else belongs in the “out-group,” or people who might represent a threat to the things you hold dear.

“In the expression ‘Taking Our Country Back,’ there’s an implied sense of threat,” says Tropp. “It implies that somebody else is taking something away from us that we feel we are entitled to…. Prejudice grows out of that sense of threat, whether actual or perceived.”

What can you do?

The messages from Trump’s campaign indicated that “expressions of racial antipathy and prejudice are appropriate or allowed,” says Tropp, “even though that runs very strongly counter to other prevailing norms in our society.”

To fight it, confront it, she says. “Research from social psychology shows that when you confront people making it clear that you do not agree with those expressions and you do not perceive them to be appropriate, that has an impact in shaping the social norms. They may not always like people who confront them, but they do tend to change their behavior. It also gives a really important message to all of the other people around that exchange.”

If you’re the non-confrontational type, there’s a handy guide going around for how to fight back against Islamophobia without having to get into an arguing match.

Racism and discrimination aren’t going to be solved overnight, but if it’s ever going to happen, different groups need to become better at talking to each other—across party lines and across racial and ethnic divides.

“There’s a lot of research to suggest that the more people of different groups interact with each other, the less threatened they feel by each other,” says Tropp. “If we care about creating a unified country, we have to find mechanisms for people with very divergent views to be willing to come to the table, listen to each other, and respect each other in order to find solutions.”

Other ways you can help: Volunteer to help someone learn English as a second language. It’s a great way to foster cross-cultural friendships, and it’s as easy as sitting down to have a conversation. Or show your support by attending one of the solidarity gatherings that are being organized across the country.

As counterintuitive as it may seem, there’s a possibility that Trump could actually drive our society together rather than apart. Psychologically, when we are faced with a common threat (such as a hate-mongering president), people who might have seemed threatening before can all of a sudden become your closest allies.

“One of the things I found really compelling about this election was, on the one hand there seems to be really clear endorsement of racist beliefs and ideologies. And on the other hand, there’s a very clear endorsement of unity and diversity with the slogan ‘Stronger together’,” says Tropp. “That suggests to me that either or both of those are possible. It’s really up to us to choose which we want to seed and nurture.”