5 key lessons after a week on Mastodon

Yes, the learning curve is steep, but not insurmountable. 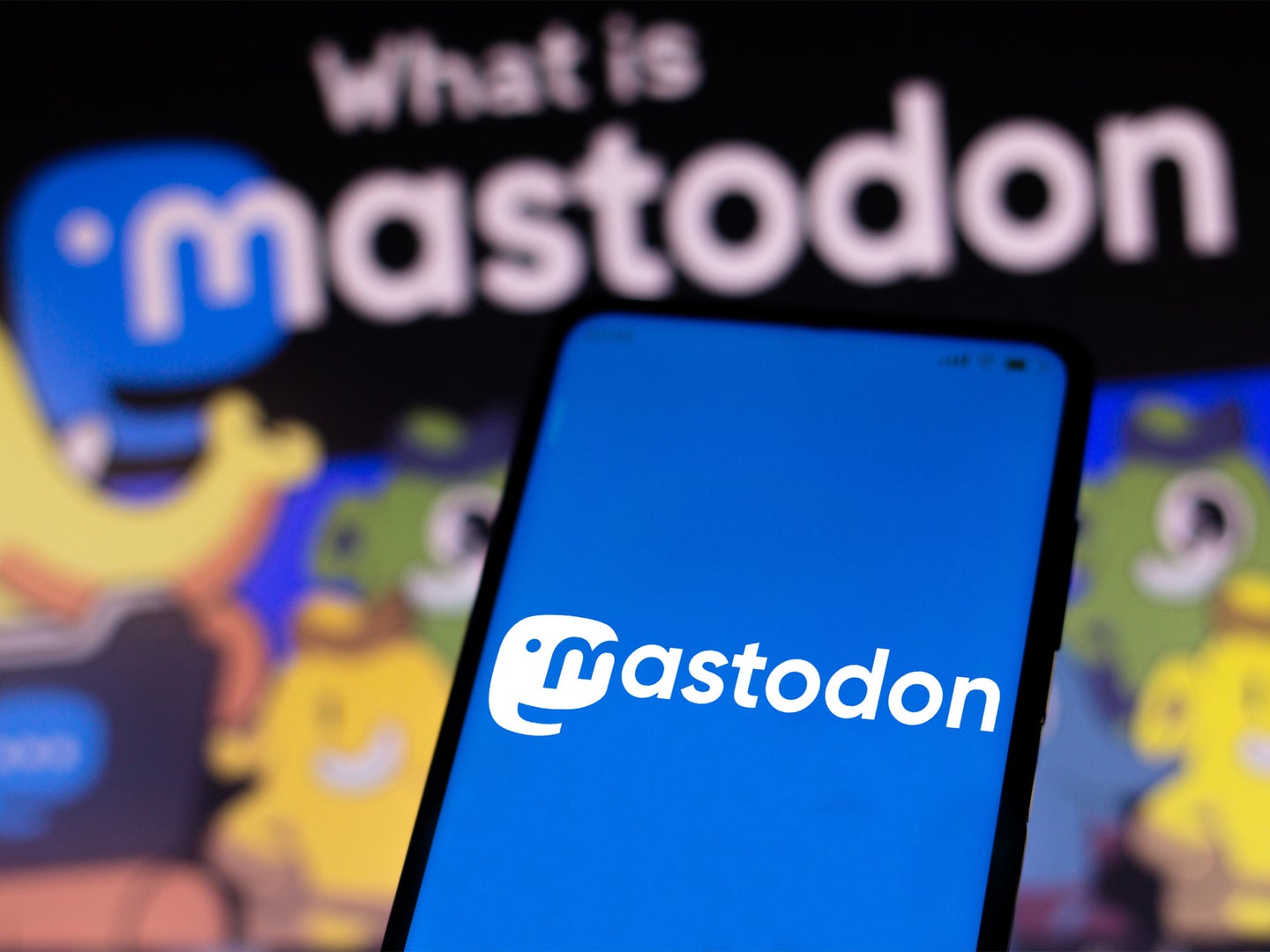 Thousands of users are trying out the decentralized network after Twitter's debacle. rafapress / Deposit Photos
SHARE

We don’t need to tell you it’s been a wild few days in the Twitterverse. But over at Mastodon, things have been chill. That is, of course, as long as you’re not struggling to understand how to use a social network you may not have even heard of a month ago.

We get it. For the past week, we’ve been among those new Mastodon users trying to understand what a federated timeline is and what server to sign on to. And after seven days of dumping every fleeting thought onto the platform, we’ve learned a number of things that may help you decide whether the decentralized network is a good place to set up shop, no matter what happens with Twitter.

The steep learning curve is real

Twitter is (was?) popular, among other things, because it’s easy to use. You log in, you post, you reply, you like, you retweet, you repeat. Everyone can see your public tweets and direct messages are private. Simple.

But as you might have read elsewhere, that’s not exactly how this platform works, and you can never really be sure who’s seen your posts. Mastodon is a decentralized social network, which means that there are lots of different spaces (called servers, or instances) that work independently but are slightly connected at the same time. Mastodon’s creator Eugen Rochko likens the system to email—you can have a Gmail account, your friend can have a Yahoo Mail account, and you can still send messages to each other even though both platforms are different. That means that even though you and your friend have accounts on different instances (like mastodon.social and universodon.com) you can still follow and message each other.

That sort of explains it, but not quite. You see, there’s no way for your posts to reach every Mastodon server unless someone on each one follows you or republishes your post. This platform is designed as a group of like-minded communities, as opposed to Twitter’s huge public square where everyone’s trying to be heard by everybody. Because of that design, it will be hard for you to reach each and every Mastodon user, and you may not want to—they won’t all be interested in the same things you are. What helped us understand this better was a helpful chart and the handful of guides we read on how to use the site.

The annoying conclusion is that yes, Mastodon is more convoluted than Twitter, so you will need to adjust. You’ll get there, but you’ll definitely have to put in a little bit of work. If you’re not willing to do that, maybe you’re better off staying away.

Mastodon looks an awful lot like the bird app, which might trick you into thinking that once you wrap your mind around the whole multiple servers thing, the rest will basically be the same. Yeah, not quite.

The biggest similarity is the Home timeline full of posts from people you follow, but there are also two other timelines: Local and Federated. The former is a stream of posts from people within your instance, so if you signed up for Mastodon.social (the biggest, most diverse one), it’s where you’ll see the posts of every other member of the community. Federated, on the other hand, is a feed featuring posts from people outside your server, but not everyone on Mastodon. For posts to make it there, someone in your instance must follow that user or repost their content. The federated timeline is a good place to get a sense of what’s going on beyond your interests and find new people to follow, so it’s a great starting point if you want to build your following.

On Twitter, you get 280 characters to express yourself, whereas Mastodon gives you 500. And you can still post polls, photos, GIFs, and video, but the platform doesn’t support the large variety of files Twitter does. Things like the number and heft of the documents you can upload are also more limited. You’ll notice you can easily reply to and repost (reboost) content from accounts you follow or that pop up on your federated timeline, but you can’t quote them in a new post. Rochko designed it like this deliberately, to avoid increased toxicity. The idea is that you interact directly with the author of the post, not talk to your audience about somebody else.

Lastly, direct messaging is not as private as it seems to be on Twitter. There, you always have the choice to message someone privately, in a place that seems separate from your main timeline. But on Mastodon, you can choose who sees each of your posts, and DMs are just posts with a highly restricted audience visible only to the people mentioned in them. These posts are not end-to-end encrypted, which is something Mastodon reminds you of every time you click the earth icon in the compose window and set your audience to Mentioned people only. Just a reminder—Twitter’s DMs are also not end-to-end encrypted, so even though they live as private messages, people at Twitter or with access to Twitter’s servers may very well see their contents. This is why some people talked about deleting DMs when Elon Musk took the reins.

Yes, everyone is way nicer, but that’s not necessarily a good thing

Mastodon’s kinder nature has been a huge selling point to people who are sick of the fast-paced, often toxic nature of Twitter. And it’s true: Mastodon is, indeed, a happier, gentler place where people are not waiting for someone to post something they consider stupid just so they can point it out to their followers. There seems to be more of a collaborative and supporting environment on Mastodon, which is especially great when you’re a new user still striving to figure things out. Ask a question and no one will call you a moron for not getting it right away—people will actually help you and redirect you to handy resources to make your life easier. Shocking.

The problem is that some users (as Sarah Jeoung at Vice pointed out first in 2017) actually like some of the toxicity associated with Twitter. No, they’re not masochists—it’s because witnessing even the most nonsensical takes within any debate is interesting and can provide fresh points of view you hadn’t even considered.

Coming from a brash, in-your-face environment like Twitter, you may be surprised that the people on your server seem to dislike political banter. On mastodon.social, for example, users will kindly thank you when you post political content behind a warning. That may change with the influx of Twitter users and the eventual creation of specialized servers where this kind of contentious debate could take place. But as of the time of writing, mastodon.social and most other servers on the platform are still very non-political places, and it seems they’ll stay that way.

Hashtags are crucial if you want exposure

Surprise—Mastodon has no content algorithm. This means that no matter how many posts about your favorite bands you like, or how many movie-focused accounts you follow, your timeline won’t show you more of the same. It’ll just be a stream of posts in chronological order and nothing else.

Not having the platform constantly suggesting the same kind of accounts and content means you won’t be further siloed into a smaller bubble of like-minded people. You’ll already be in a semi-independent community of users with similar interests, so why compartmentalize even more? But the lack of an algorithm also makes it hard to know who to follow, and grow your following if you want to reach a bigger audience.

This is where hashtags come in. They’re the main way you have on Mastodon to categorize your posts and make it easier for other people to find them. In fact, the search engine within the platform only works with hashtags and won’t search within the rest of the words or content of the posts as Twitter does. Apparently, this is also by design and prevents users from easily finding people they can harass.

Another byproduct of no algorithm is that it’s a bit tricky to find other users with similar interests. A quick search for your friends will show you that knowing another user’s handle is not enough—you’ll need to know what server they are on. Again, this works just like email, and if you don’t know if your friend has a @yahoo or a @gmail account, then you won’t be able to find and message them. So unless you know your friend’s full address, you might struggle to track them down.

Even following people from other instances whose content you have right in front of you can be difficult. When you click or tap the follow icon next to their name (a person with a plus sign on top), you’ll see a pop-up alert with two options. You can either log into that person’s instance so you can follow them there (Mastodon allows you to join as many servers as you like), or you can copy the person’s full Mastodon address so you can manually paste it into the search bar on your profile, find them, and follow them from there.

Yes, it’s not a ton of work, but it’s definitely tedious, and it’ll be even more annoying to new users who will have to go through that process over and over as they build their timelines. If you find yourself following a lot of people from one particular instance that is not your own, you can transfer your profile to that instance. It’s an easy process but, as with a lot of things on Mastodon, you have to know how to do it.

Start by creating a profile on the server you want to move to. Keep in mind that some servers have special requirements or don’t allow new members at all. Once your new account is set up, open Mastodon in a web browser, go to Preferences, Account, and scroll down to Moving from a different account. There, click Create an account alias and follow the steps. From your old server, go to Account, scroll down to Moving to a different account, and click Configure it here. Follow the prompts and you’ll be golden.

More Twitter alternatives might be popping up in the coming months. Whether Mastodon will turn into the world’s new watercooler is yet to be seen, but if you find yourself in need of a place to pour your thoughts, this one might be as good as any—at least for the time being.