It’s never too late to learn to be on time

No, your friends most likely don't find your tardiness cute. 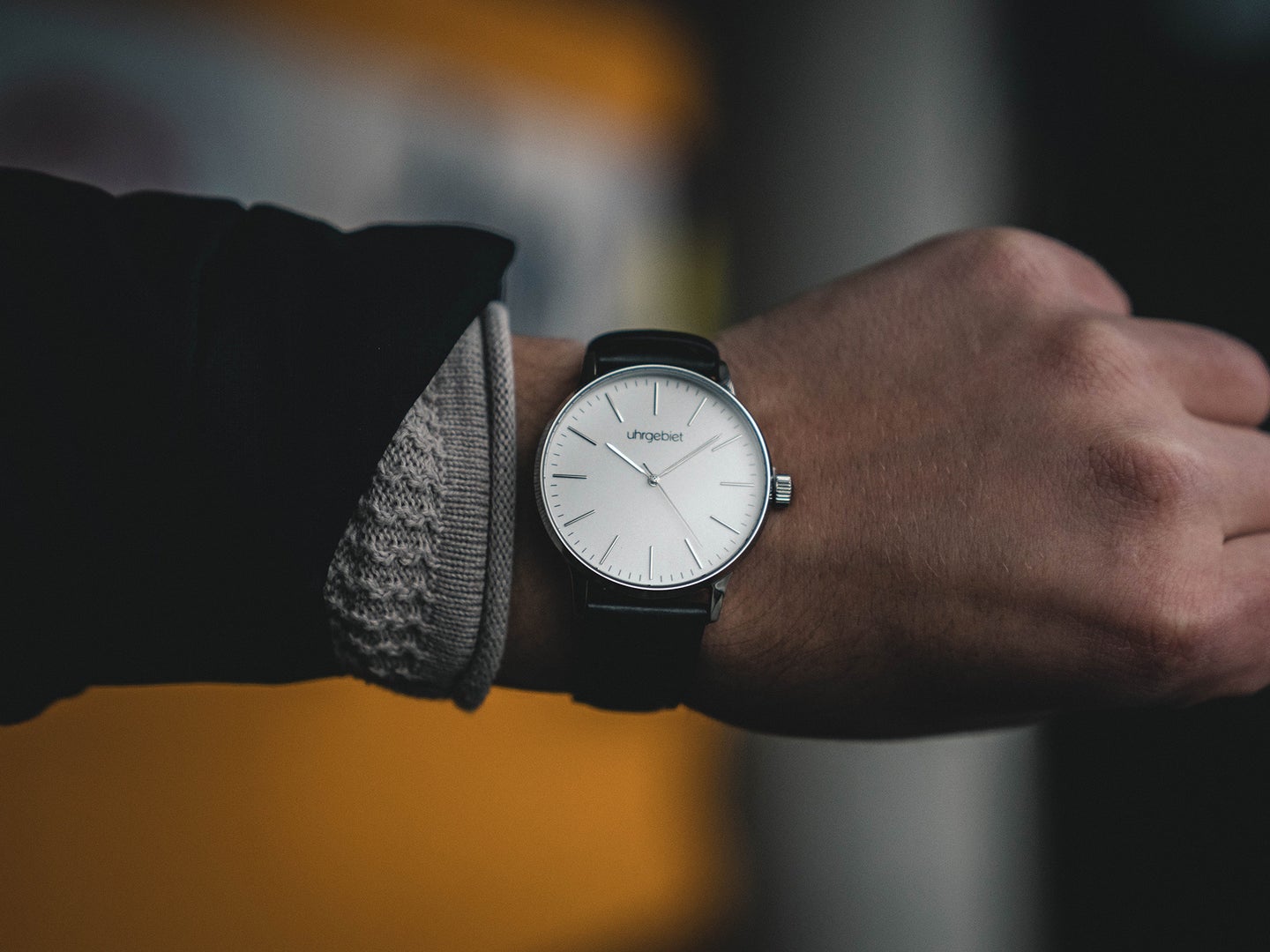 Analog clocks can help you get a better idea of the passing of time. Marius Mann / Pexels
SHARE

Being known among your friends as the one who’s always late is no fun. You’ve probably tried repeatedly to be on time, too, but keep finding yourself lying about being a block away when you haven’t actually left yet.

And it’s not only about the annoyed look on your friends’ and colleagues’ faces when you finally arrive. Experts say that people who are perpetually tardy have a harder time keeping jobs, tend to harm their relationships, and have higher stress levels, while research shows that unpunctual students struggle in school.

“Punctuality is all about prioritization, [it’s] both a skill and a practice,” says Rashelle Isip, a productivity consultant based in New York City and author of The order expert’s guide to time management. “The good news is that you can become better at it if you’re willing to learn, make mistakes, and change your habits.”

Get to the bottom of why you’re always late

The five time-management experts I interviewed said the most important step you can take to improve your unpunctuality is to understand why you’re late in the first place.

“Being chronically late is not necessarily always due to poor time management,” says Pauline Wallin, a licensed psychologist based in Camp Hill, Pennsylvania, who teaches workshops on procrastination and chronic lateness. “If it were, people would learn from their experiences and change their behaviors for next time.”

[Related: Get your work life together with one of these time-management apps]

Instead, experts say being chronically late stems from emotional and motivational factors, as defined by six different procrastination-prone personality types. Understanding which one you identify with can help you reverse-engineer your tardiness and stop it before it grows into a bigger issue.

Typically, procrastination is deeply related to anxiety, Wallin says. The two work hand in hand, as the quickest way to ease your anxiety, is to find an excuse for why you can’t do whatever you’re putting off, she explains.

That means that if you have mixed feelings about where you’re going (such as work, a doctor’s appointment, or a lunch date) you may subconsciously delay your arrival to reduce the anxiety you’ll feel once you get there, she says.

If this sounds familiar, Isip recommends getting to the root of why you’re hesitating in the first place—is it a job you don’t enjoy, or maybe a friendship you’re done with? She also advises making commitments more intentionally. “If you know you’re going to drag your feet to get somewhere, maybe it’s not the kind of thing you ought to be committing to in the first place,” she says.

Linda Sapadin, a clinical psychologist practicing on Long Island and author of How to beat procrastination in the digital age, says perfectionists are often late because they can’t leave tasks undone until they’ve completed them to their satisfaction—and doing so may take longer than previously scheduled.

If that’s you, Sapadin suggests taking on less and giving yourself extra time between tasks to ensure you’re happy with how they turn out. Hopefully, this will also result in you arriving places on time.

On the other end of the spectrum are the “dreamers,” as Sapadin defines them. Wallin says they’re “the easily distracted ones,” who can lose focus while working on a task because of something as common as an email alert they couldn’t ignore. This can easily become a problem when you inadvertently put off your most important tasks with each new distraction, resulting in you ending up crunched for time when your next commitment arises.

To change this behavior, Isip says dreamers should cultivate awareness of how distractions can easily derail their focus and prepare accordingly. She suggests silencing text threads, turning off non-essential notifications, and learning to laser-focus on one task at a time. The latter is easier to do when you take breaks, allowing your brain to rest from time to time.

Overachievers tend to think of themselves as multitasking powerhouses, capable of juggling all the balls at once. Yet they are often unaware of their tendency to drop one—or 10. For them, the priority is to finish a task, even if that means throwing punctuality out the window.

If you think this is your personality type, Isip says to remind yourself that you’re still limited by the same number of hours each day as everyone else and that your ambition of accomplishing that “one last thing” often means you’ll leave your friends waiting on you as a result.

​​Many people underestimate how much time they need to complete tasks and fail to consider the little things that might slow them down, says Lawrence White, a professor emeritus of psychology at Beloit College in Wisconsin.

The solution, Isip says, is for people who plan poorly to learn to consider that sometimes a multitude of tiny delays may pile up without them noticing. Take transportation, for example: “Travel time often includes time spent walking, driving, flying, taking the train or bus, entering a building, taking the elevator, logging into a video session, unpacking one’s belongings, and grabbing a hot beverage,” she says.

Isip explains that such people can check traffic or weather ahead of time, plan out the fastest routes to their destination, and prepare extra time for all the tiny and unexpected delays they’ll have to get through along the way. “Be mindful of how much those small tasks will add up,” she advises.

Wallin explains that the defier is someone who just really doesn’t want to go to certain places, so they give themselves various excuses and rationalizations to delay going. This behavior is similar to that of the anxiety-prone personality, but Wallin explains that in this case, the resistance comes from not wanting to be controlled by something or someone. People who identify with this personality type might want to express their defiance by imposing their own schedule on others, rebelling at what people ask or expect of them.

The key to overcoming this behavior is to get to the root of why you may want to rebel against the person you’re supposed to meet or the task you’re meant to do. You should also be more mindful of the commitments you make so that you don’t find yourself consciously or subconsciously putting off things you don’t actually want to do.

You may relate to one or more of these procrastination-prone personality types, but Geraldine Joaquim, a licensed psychotherapist and wellness coach based in South East, England, says that whatever the number, what matters is understanding why you do what you do so you can start improving.

“The key in all this is developing your self-awareness,” she says.

Beyond identifying your personal characteristics, it may also be helpful to understand if there are other factors at play behind your attitude toward punctuality. Maybe your parents were not big on being on time, or you might come from a culture where being late is not that big of an issue.

“We all have a huge storage of templates of behaviors we routinely fall back on in any given situation,” says Joaquim. Recognizing where a bad habit began can help correct it.

Remind yourself of the passage of time

A constant reminder of the passage of time can help you manage it better. To do this, Isip recommends surrounding yourself with clocks or having one you can look at at all times. She says analog clocks are even better “because the ever-moving clock hands remind us that time is passing, which helps us be more mindful of what tasks we need to complete and by when.”

She adds that having a clock within eyeshot is also helpful because if you’re more aware of something in your conscious world, it’s more likely to impact your subconscious. This works in a similar way to the Baader-Meinhof phenomenon, which happens when you become aware of something new to you (a song, a trend, a particular dog breed) and think you see it everywhere.

Get help from technology

Clocks are not the only type of technology that can help you break the cycle of tardiness. White, for one, suggests setting up your phone or computer to remind you of upcoming appointments, while Isip recommends programming audible timers, voice announcements, and countdown timers.

If you set up reminders before you go somewhere, Wallin says it’s best to have them go off 10 minutes before you need to leave so you have enough time to wrap up the task you’re on and get moving. Thinking back to the personality types described above, this advice is most likely to help the distracted and poor-planning groups.

Try with a little help from your friends

Your friends are largely the ones affected by your lack of punctuality, so they may be the most interested in helping you get better at it. But you’ll have to ask them to assist you, since they may be too polite to say something.

“Talking through your lack of punctuality with a friend is a great way to acknowledge that you have a problem that needs fixing,” Isip says.

[Related: How to work from home without losing productivity]

A study published in 2011 by the Intervention in School and Clinic journal, showed that teachers were able to help perpetually late students at one school by keeping an eye on when they arrived and providing positive reinforcement like verbal praise when they did so on time. Asking friends for help with accountability and validation can have the same effect, encouraging you to be more punctual.

Friends can also be helpful if they tell you when they are about to leave to meet you, Isip says. That way you can be more mindful of leaving on time as well. Making an upfront verbal (or textual) commitment to arrive on time may also be the boost you need to motivate you to get out the door when you need to.

This is the “shoot for the moon and you’ll at least hit the stars” way of dealing with your tardiness. Such an approach, Wallin explains, can replace the feeling of anxiety and resistance with the calm of being prepared and ahead of the stress.

Changing your goal starts with getting comfortable with arriving early and envisioning how nice that extra time can feel. Use it to decompress, browse aimlessly on your phone for a bit, catch up on emails, or even do a quick meditation. Imagine being in a state of no rush once you get there and then getting to see your friends’ and colleagues’ faces as they arrive. Not only will it be helpful to those relationships—Wallin says arriving early, “may turn out to be an especially positive experience” for you as well.

is a health, science, and history journalist based in Utah. His work has appeared in National Geographic, The Washington Post,  Science magazine, Kaiser Health News, and Smithsonian Magazine.