Crowdfund A $65 Robot That Runs Like A Maniac Cockroach

This insect-inspired robot, made of cardboard and plastic, can sprint off a table and just keep on runnin'. 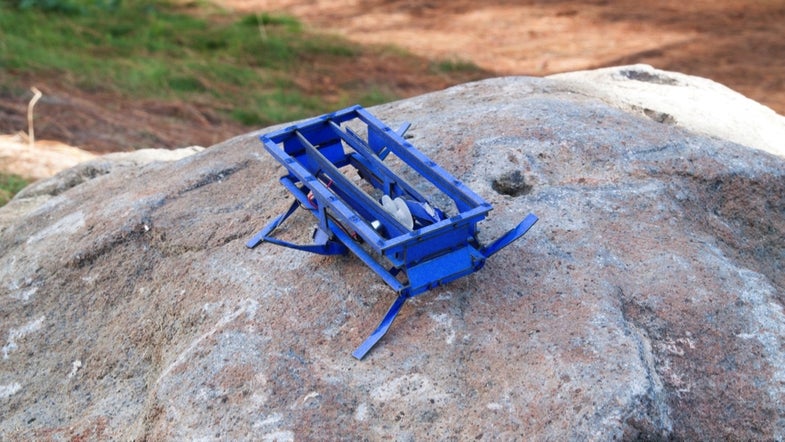 The Dash, created by Dash Robotics, is an insect-inspired simple robot kit that runs like the fastest, most rectangular cockroach ever. There’s a crowdfunding campaign and beta test, with 27 days left to get one of the first 1,000 robots available.

Dash stands for “Dynamic Autonomous Sprawled Hexapod,” which is a great forced acronym for “six-legged robot that recovers when it falls.” It was first developed in 2009 by a team of students working at UC Berekley’s biomimetics lab, which focuses on designing machines that imitate animals.

Dash’s springy body can keep it running even after a fall from over 90 feet, and it can run straight at 1.5 meters per second, up to a mile. After years of development, the robot is entering a beta testing stage.

Made largely of cardboard and plastic, the key to the robot is a special polymer layer sandwiched between layers of cardboard, giving the body something of an organic flexibility while still remaining cheap to produce. Dash’s creators say the $65 kit can be assembled in about an hour, and an already-assembled version can be ordered for $100.

The first version of the robot, called the Alpha Dash, only runs in straight lines. The next version, called Beta Dash, will work with Arduinos, a popular open-source single-board microcontroller, and will be steerable. Both versions come with gyroscopic sensors, visible light and infrared sensors, LED lights, and electronic ports for expansion. The creators are developing a mobile app to control Dash robots over Bluetooth.

Watch it fall over and over again in the video below: