The people that brought you such fringe DIY projects as the “first-person shooter with real guns” and “driving your car... 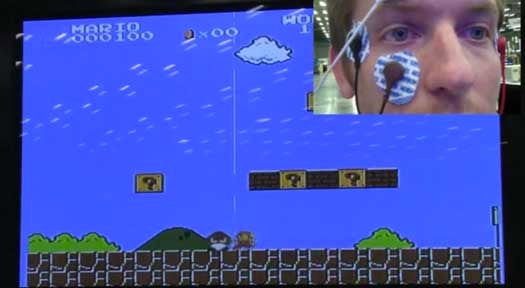 The people that brought you such fringe DIY projects as the “first-person shooter with real guns” and “driving your car with an iPhone” have come up with yet another project that you probably shouldn’t try at home: a means of placing electrodes all over your face so you can play NES using only your eyes.

Waterloo Labs, a group of science and engineering types that produce the occasional DIY video from deep in the heart of Texas, created Eye Mario to generate the basic commands of a first-gen Nintendo controller using the polar differences in the human eye (these measurements are called an electro-oculogram [EOG] we’re told). By correlating the EOG readings to commands like “left,” “right,” and “jump” on the NES controller, the Waterloo team shows how you can play simple video games like the original Super Mario Bros. using only your eyes.

Should you choose to duplicate the system at home, at least watch the video all the way through to the stern warning of severe injury or death. Stick electrodes in your face at your own risk, readers. Check out Eye Mario in practice below.